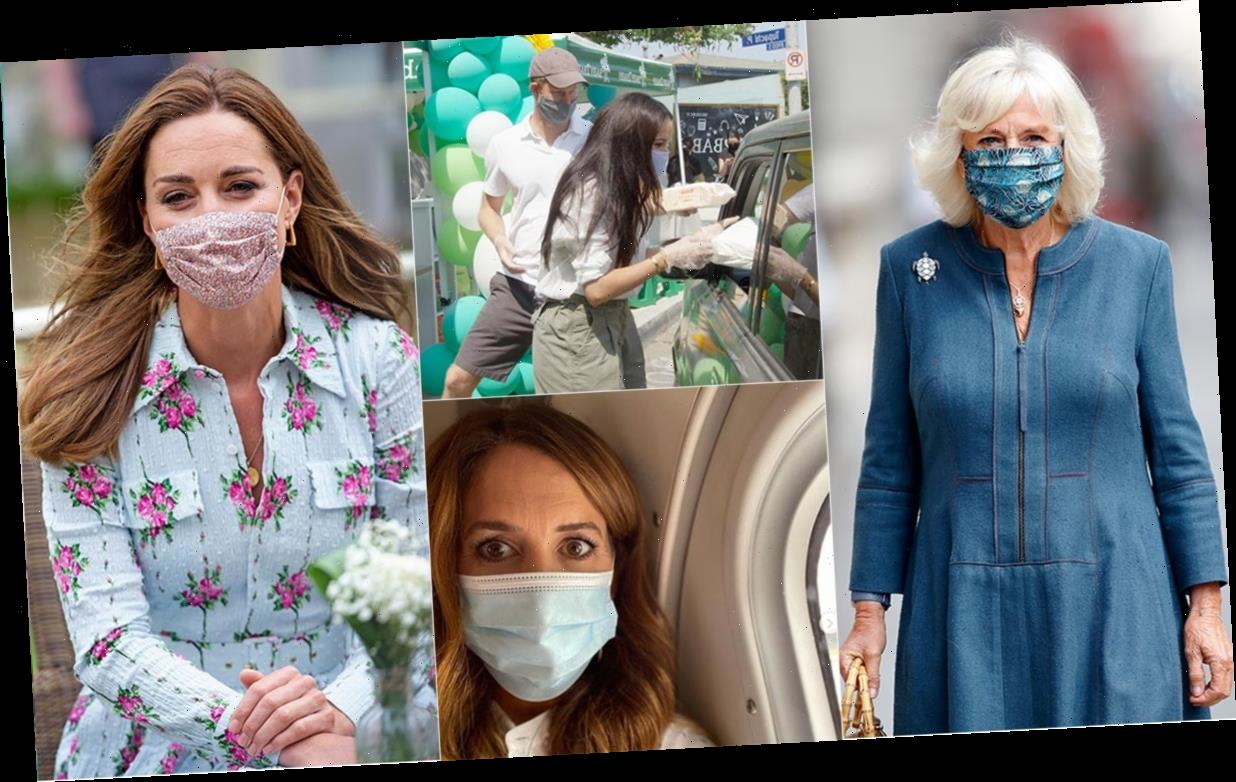 After the outbreak of the coronavirus pandemic in 2020, face masks have become mandatory in certain countries. In England, wearing a face covering in various indoor places became compulsory at the end of July, most notably shops, supermarkets, places of worship, public areas of hotels, transport hubs and on public transport – to name a few scenarios.

The royals are no exception to the rule and have been pictured adhering to government guidelines throughout the pandemic. The likes of Prince Charles, the Duchess of Cornwall, and the Duke and Duchess of Cambridge hae been wearing face coverings during socially distanced engagements.

England entered its third lockdown in January 2021 and the royals returned to Zoom calls to carry out their duties.

HELLO! has also launched our very own limited-edition face masks designed by Melissa Obadash, available in two colourways including our iconic bold red. All profits from this collaboration will be donated to WellChild, a national charity that counts Prince Harry as its patron and supports seriously ill children and their families. Find out more here.

The Queen was pictured wearing a face mask for the first time in November 2020, as she marked the centenary of the burial of the Unknown Warrior at Westminster Abbey.

Her Majesty donned a black outfit and matching face covering to pay her respects during the poignant service, in which a bouquet of flowers was placed on the grave.

Keep clicking through the gallery to see more pictures…

In August, Prince Harry and Meghan Markle stepped out for one of their first public appearances in Los Angeles since moving Stateside in the spring.

The couple volunteered with local LA charity, Baby2Baby, which provides basic necessities like nappies, wipes and clothes to children and families in need.

A source close to the Duke and Duchess said that the couple passed out school supplies to families and helped the children pick out and try on their new backpacks. Despite the 32 degrees celcius heat, Harry and Meghan were determined to serve every last child waiting in a line that wrapped around the school.

The Sussexes both wore protective gloves and face coverings, with Meghan donning a blue and white striped mask from Royal Jelly, a New-York based, Black female-founded company.

Photo credit: Christian Monterrosa for The Duke and Duchess of Sussex

The Duchess of Cornwall stepped out for a day of engagements in London at the end of July, visiting the National Gallery and Boots Piccadilly Store. Camilla matched her denim dress with a pretty patterned face covering, which appeared to feature a gorgeous peacock feather print.

She was actually gifted the face mask from her friend or her 73rd birthday – how lovely is that? The Duchess' stylish blue Liberty print mask was made by couture designer Fiona Clare.

The Duke of Cambridge donned a face mask and protective coat as he heard about the Oxford Vaccine Group’s vital work to fight the virus, during a visit to their facility in June.

The Countess of Wessex volunteering at the Mealforce Catering Kitchen, as part of their celebrations of the 75th anniversary of VE Day.

The Duke and Duchess of Sussex were pictured wearing face coverings as they helped to distribute meals to the vulnerable in West Hollywood in April, as part of the Project Angel Food charity.

Resident Dan Tyrell was shocked when he opened the door to royalty. "They were both nice and very down-to-earth people," he told WEHOville. "They had masks on, and they were dressed down in jeans, but very nice jeans. I thought that tall red-headed guy looked pretty familiar, and that girl was very pretty. Then I saw the large black SUVs with the security guards behind them. If they had given me the heads up, I would have worn my tiara," he joked.

Crown Princess Mary of Denmark shared a post, urging people to always remember to wear a face covering in public. The mother-of-four even admitted that she temporarily forgot about the restrictions and shook hands with someone during an official engagement.

Sharing two photos of herself aboard an airplane, Mary wrote: "On land, at sea and in the air – we have to get used to wearing coverings. It is important that we follow the recommendations of the health authorities together. ⁣

"Yesterday I was in Grenaa for my first official visit after the summer holidays. At sea and in the air it was fine, but on land it slipped my mind and I unfortunately shook hands. It reminded me how important it is to help each other follow the recommendations. Take care of yourself, and take care of each other."

Japanese Emperor Naruhito and Empress Masako wore face masks as they arrived at the Imperial Palace in Tokyo in June, to feed mulberry leaves to silkworms as an imperial tradition.

King Felipe and Queen Letizia of Spain wearing masks during a round-table discussion at the Coslada Transport Centre in Madrid in June.

Queen Mathilde of Belgium wore a protective mask as she visited the Gediflora Chrysanthemum nursery in Oostnieuwkerke, Belgium, in May.

MORE: 13 charities you can support during coronavirus and how to help

And we love how her red face mask matched Mathilde's bold outfit!

MORE: 8 volunteers who have lent a royal helping hand during coronavirus crisis

Princess Eugenie and husband Jack Brooskbank donned face masks as they dropped off care packages at a London hospital.

Queen Maxima of the Netherlands wore a white face covering with a printed coat to visit technology company Demcon in April.

Prince Albert II of Monaco and his wife Princess Charlene, and his sister, Princess Stephanie, donned protective facemasks to attend the inauguration ceremony of the new Casino palace in Monaco in June.

MORE: Where to access mental health support and resources: A helpful guide

The Monaco head of state contracted the virus back in March but made a quick recovery.

King Philippe and Queen Mathilde wore face coverings during a visit to the Royal Museum of Fine Arts of Belgium.

King Philippe during his visit to a market in Wavre, Belgium on 10 June. For three days, cafes, bars and restaurants have been allowed to open and serve customers. The Belgian government asks all citizens to stay home and refrain from "non-essential inbound and outbound travel" to slow the spread of the coronavirus.

The Countess of Wessex left her Surrey home, Bagshot Park, to visit the Hope Hub, which works to prevent and end homelessness in Surrey Heath and surrounding areas. The outing was revealed by the Surrey Heath Council Twitter account, who shared several pictures of the secret visit in April.

During the engagement, Sophie wore latex gloves and a mask to stay protected. She was also pictured alongside other people whilst maintaining a two metre safety distance.

Queen Letizia donned a matching uniform and face mask during a visit to a medical centre.

Queen Mathilde of Belgium and daughter Princess Éléonore of Belgium both donned face masks to hand out food packages at Kamiano, a restaurant in Brussels which helps the homeless.

Queen Rania of Jordan wore a face covering to meet with a group of employees and volunteers from the Royal Health Awareness Society (RHAS) and digital health platform Altibbi to learn about their roles in supporting national efforts to confront the coronavirus pandemic in Jordan, in June.

In May, King Felipe and Queen Letizia paid a visit to Madrid's wholesale Mercamadrid market.

In early August, Prince William and Kate paid a surprise visit to Barry Island, in Wales – the setting for BBC comedy series Gavin and Stacey. The royals visited the seaside resort to hear about how the tourism industry is getting back on its feet, following the impact of the coronavirus pandemic. They visited some of the show's most famous locations, including the amusement arcades and Marco's Cafe.

William and Kate then visited Shire Hall Care Home in Cardiff where they spoke to some of the home's staff, residents and their family members in the garden. For this engagement, the Duke and Duchess donned face coverings, with Kate wearing the Amaia ditsy print mask.

Queen Mathilde wore a protective mask during her visit to the bakery and bike repair classes of the French Community Technical Institute in Tournai, Belgium on 12 June.