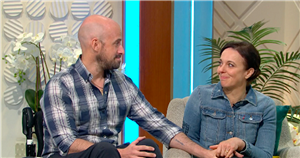 Amanda Abbington and her fiancé Jonathan Goodwin have opened up about the shocking accident that left the Britain’s Got Talent star paralysed in their first TV interview together.

Sherlock star Amanda, 48, and escapologist Jonathan, 42, joined Lorraine Kelly on her ITV show on Friday to talk about how the accident had impacted their relationship.

Jonathan fell 30 feet between two burning cars when a stunt on America’s Got Talent: Extreme went wrong, and spent four months in hospital as a result.

The stuntman, who found fame as a finalist on BGT, told Lorraine: “I’m doing as well as I can be. It was pretty gnarly. It sounds very dramatic sitting here but I did nearly die.”

Following the accident Jonathan was left fighting for his life with a severed spinal cord, third degree burns, a broken spine and shattered legs, and nowuses a wheelchair.

He revealed to Lorraine that the surgeon who performed a spinal operation on him said that it was “basically the worst he had ever seen”.

Jonathan explained that he was lucky to be alive because despite plummeting head-first to the ground in the horror accident, he miraculously avoided hitting his head by tucking in at the last second.

He went on to recall the heartbreaking moment he told Amanda that she could end their relationship following his injury. “I did say, you have a get out of jail free card – if you want to walk away, then I completely understand.

“She told me not to be so stupid and that was that,” he added, while Amanda was moved to tears by the emotional anecdote as she clutched her fiancé's hand.

But Amanda told Lorraine that the experience of nearly losing her fiancé has brought the pair even closer together, saying that Jonathan is a “total inspiration” to her – even though she joked that “he’s an idiot”.

“We are closer and tighter than ever. We just have this unspoken thing – every day is a joy,” she said.

Do you love celebrities, fashion, home interiors and beauty? Then do not waste another minute of your time and sign up to our daily newsletter, where you will receive all that – and more – straight to your inbox at 5pm every day.

From exclusive at home tours, cleaning hacks, the latest in beauty trends – and of course, all the latest celebrity gossip, look no further.

Pop your email address in the box at the top of this article, and et voila! Enjoy

The actress added that she and Jonathan want to “be the people who say yes” to every new adventure. “Life’s too short – that’s what I’ve realised through all of this. Just be in the moment and grab it with both hands, because you just don’t know what’s going to happen," she told Lorraine.

The couple also shared their excitement for their upcoming wedding later this year, revealing that plans were in full motion for the ceremony.

The loved-up pair admitted that they got engaged “within half an hour” of first meeting each other in person, after spending several hours talking on the phone each day and being friends on social media for a decade.

Jonathan ended the interview by sweetly telling Lorraine that their love was “the best medicine” on his road to recovery.

Lorraine airs weekdays at 9am on ITV & ITV Hub.