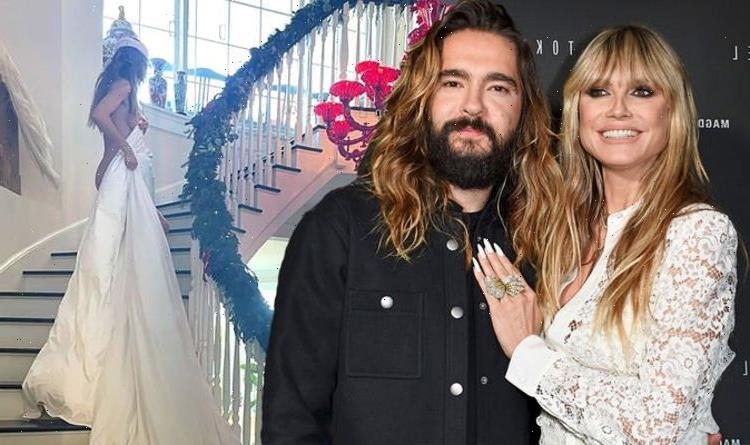 Supermodel Heidi Klum, 48, posted a series of stunning Christmas snaps alongside her husband Tom Kaulitz, 31. The couple could be seen enjoying the festive period together, accompanied by their adorable pet pooch.

Heidi posted the suggestive snaps on Instagram in view of her 8.9 million followers.

Next to the photos she simply wrote: “Let’s go back to bed.”

In the first picture, the model can be seen ascending a grand flight of stairs fitted with festive decorations.

In the picture, Heidi opted to go completely nude as she dragged a long duvet behind her, just about covering herself with the bedding.

The ornate room was also fitted out with a red chandelier and small decorative golden trees in the background.

In the next picture, Heidi is grinning in her santa hat as she gives her dog a cuddle, while husband Tom smiles affectionately at them both.

In the final photo, the Tokio Hotel singer can be spotted leaning in to give Heidi a quick smooch.

This is not the first time the model has felt comfortable enough to bare it all in front of the camera.

In an interview with Ocean Drive magazine a number of years ago, she even described herself as “a nudist”.

“I grew up going to nude beaches with my parents, so I’m a nudist,” the former Victoria’s Secret model said.

“I have no problems with nudity at all. I’m very free.

“When I go to the beach, it’s in a very remote place where there are not a lot of people, and I like to go topless.”

Early on in her career, Heidi famously appeared on the cover of the Sports Illustrated Swimsuit Issue in 1998 and was the first German model to become a Victoria’s Secret angel.

The fashion icon was introduced to her third husband Tom while she was hosting the show Germany’s Next Top Model.

The pair made their relationship public in 2018 and got married the following year.

Heidi was previously married to celebrity hairstylist Ric Pipino between 1997 and 2002 and singer-songwriter Seal between 2004 and 2015.

Tom was also married to model and hairstylist Ria Sommerfeld between 2015 and 2018.

She then went on to have three more children with her long-time husband Seal, who eventually also adopted her daughter Leni in 2009.