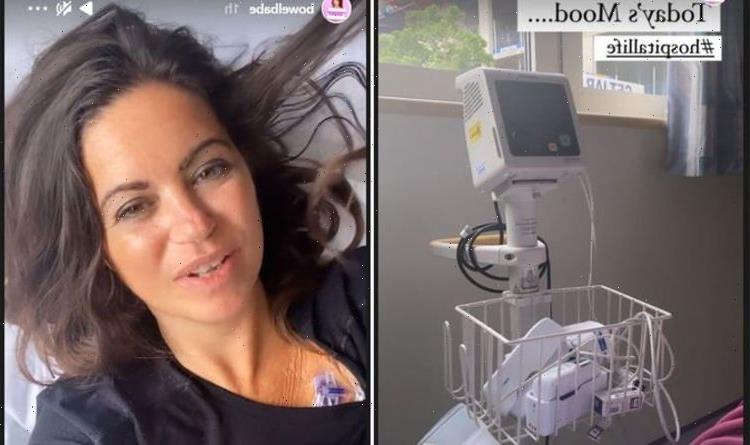 Podcast host Deborah James, 39, has taken to Instagram to reveal that she has returned to hospital with “spiking fevers” amid her cancer battle. Just weeks ago the mother-of-two heartbreakingly shared that her “drugs have stopped working” and her “liver is failing”, leading her to have a stent fitted and starting chemotherapy once again.

In view of her 179,000 followers, the host of You, Me and the Big C stated that she was back in hospital.

Speaking from her hospital bed, Deborah said: “Hey team, how are we?

“Hello from hospital again where I am currently being pumped full of antibiotics and loads of fluids just to get my fever down.

“Essentially, when you’re on chemo your immune system is a little bit wrecked,” she added.

The star previously revealed that she was starting chemotherapy again after her liver function improved after having a stent fitted.

Continuing, Deborah said: “So, as soon as you spike a fever you have to go in and then there’s protocols that kind of say we have to get it down, treat it.

“So I’m feeling tired and a little bit fed up with being here again.”

Heartbreakingly, the media personality said that her soaring fever meant that she was forced to miss her daughter, Eloise’s assembly and that medical professionals had yet to determine the cause of her temperature.

“I missed my daughter’s assembly yesterday, but my temperature was too high, it was just too risky, I had to just come in,” she explained.

“We haven’t got to the bottom of what’s going on, hopefully we will soon but I’ve had loads of tests and sometimes it’s just one of those things on chemo, your body does go a bit crazy.

“But I’m in the right place and hopefully I will get home soon,” Deborah added optimistically before signing off.

Deborah also posted a snap of her view from her hospital bed, with the caption: “Today’s mood… #hospitallife.

“Annoying started spiking fevers so was admitted again. Just being pumped full of antibiotics and fluids to bring it all under control.”(sic)

Days ago the brunette revealed that she was enjoying a day out at Wimbledon after undergoing chemo treatment.

Posting a colourful snap to Instagram, the star celebrated having a day out with her dad.

She wrote: “Slept all morning to refuel!

“For now, I’m Wimbledon ready! Again! OK if you are new to following me – all you need to know is that I’m Wimbledon obsessed and go as much as I can! Today — with my dad!”

Deborah was first diagnosed with incurable bowel cancer back in 2016 and has continued to undergo treatment.

During this time, she has described her husband and father of her two children, Hugo, 13, and Eloise, 11, as being her “rock”.

Following her difficult week, the star compared it to being thrown into the “depths of hell”, but added that the radiotherapy treatment is her “ladder” to climbing back out.