Bigg Boss 14 has been going on well and slowly the contestants have been making the show interesting. Since the start, we have seen Nikki Tamboli is playing a good game. Rahul Vaidya was not visible in the first week but since the second week, we have seen him grown exceptionally well. Both, Nikki and Rahul have been friends earlier and used to gossip and joke. However, after a captaincy task, Nikki felt betrayed and they stopped talking. Soon after that they were sent to the red zone along with Jaan Sanu and they once again became friends. When Rahul had a fight with Jasmin, Nikki Tamboli was seen consoling him. Many times, we had seen Nikki Tamboli talking about Rahul sending her DMs on social media. After emerging from the red zone, Rahul had called Jasmin low-grade cunning during the tasks, on account of her wearing a lehenga instead of gym clothes like everyone else. Jasmin rebuked him for commenting on her attire and Nikki supported her this time, going so far as to call Rahul “shameless”.

Rahul once again had to explain himself to Nikki. Recently, we saw Rahul saying that he also wishes to have a friend like Aly and Jasmin are. Nikki was hurt n cried as she felt Rahul does not consider her his friend. Soon, after that during the nomination tasks everything was changed and Nikki once again abused Rahul. In the recent episodes, Aly Goni as a captain had nominated six people and Nikki had come to Rahul to ask if he will save her and not Pavitra. Rahul said he’ll think about choosing between Pavitra Punia and Nikki as the former is his good friend. He also told Nikki that he never expected her to backbite him. She accepted doing so, but added that none of it was intentional. Rahul then assured her that he’d think about whom to save, and though he did save Pavitra, he didn’t nominate Nikki either. Nikki told him that she wanted to trust him fully again She also confided in him that she longed for a concrete friendship again between them, after which Rahul hugged her. It looked like Rahul is doing the same mistake again and hence we had asked fans if they feel Rahul should trust Nikki again. Fans have said that he should not trust her again. 77% of people feel he should not trust her. 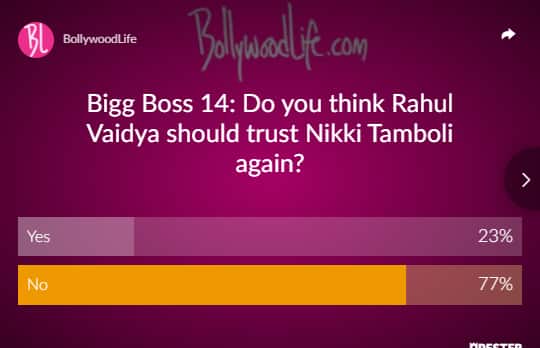