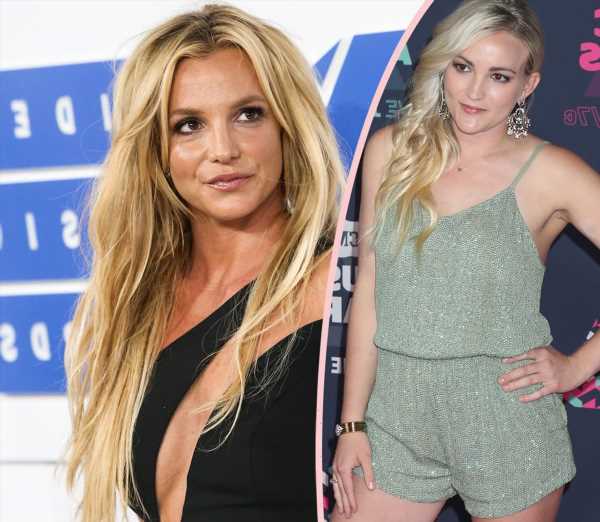 The latest drama between the feuding siblings began when the 31-year-old actress broke down in tears while discussing what it was like to grow up with a mega-superstar sister during the premiere episode of the competition series Special Forces: World’s Toughest Test this week. Jamie Lynn said that she struggled with self-esteem issues as a result of being in Brit’s shadow, explaining:

“Growing up, my sister became famous, worldwide famous, when I was very young. I’m so proud of her, love her to death, but I don’t know. Sometimes I feel like I don’t really have anything for myself.”

Given the 41-year-old singer has been vocal about how much she suffered in the nearly 14-year conservatorship at the hands of her father, Jamie Spears, and other family members, it was safe to say she didn’t take the Zoey 101 alum’s comments too well! Britney took to Instagram on Friday to fire back at Jamie Lynn, saying:

“Are we gonna say it was hard being my sister ???? Hmmmmmmmmmmm …. really ??? Well this was my spa plan at Vegas as my childhood friends had their heads held high with a seat for toes and nails and a bottle of champagne for each one of them while I STOOD AT THE DOOR not allowed to go in …. but bet ur bottom dollar they be gotten their entertainment from me that night !!!!! I’ve learned from the BEST … do we dare set aside our SELF CARE AND ACKNOWLEDGE a childhood friend ???? WHY no !!!! We teach her the MEANING OF MEAN and then throw her away in the end with no self rights !!!! You want me to share it on Telly ??? I’d rather spit in their faces and trash them on Instagram cause that’s all my family has ever been to me !!!!”

While taking a shot at the Sweet Magnolias star, she also revealed she suffered spinal accessory nerve damage as a result of some of the things she went through during her controversial arrangement:

“Pssss here are pics of what nerve damage can do … which I have right side of my body and goes numb every night !!! Not a victim story or crying about it because I was never a big deal … I sat in a chair for 10 hours a day and no rights for 4 months !!! They hurt me and nothing was done except that I lost 15 years of my life with my family owning my name … subjected to being an angel while my dad has 5 women on his tour bus drinking that cup of coffee … so cool and smooth it must have been nice owning my name for 15 years …”

The Womanizer artist concluded the post, saying it “blows my mind the hardships you say you have had with having me as your sister.” She added:

“I’m sorry you feel that way but don’t ever poke at my broken foot in a kitchen telling me to go to the doctor because my foot infection might infect your royal children !!!”

So much for seemingly squashing the beef between them last month! You can ch-ch-check out the heated message to Jamie Lynn (below): 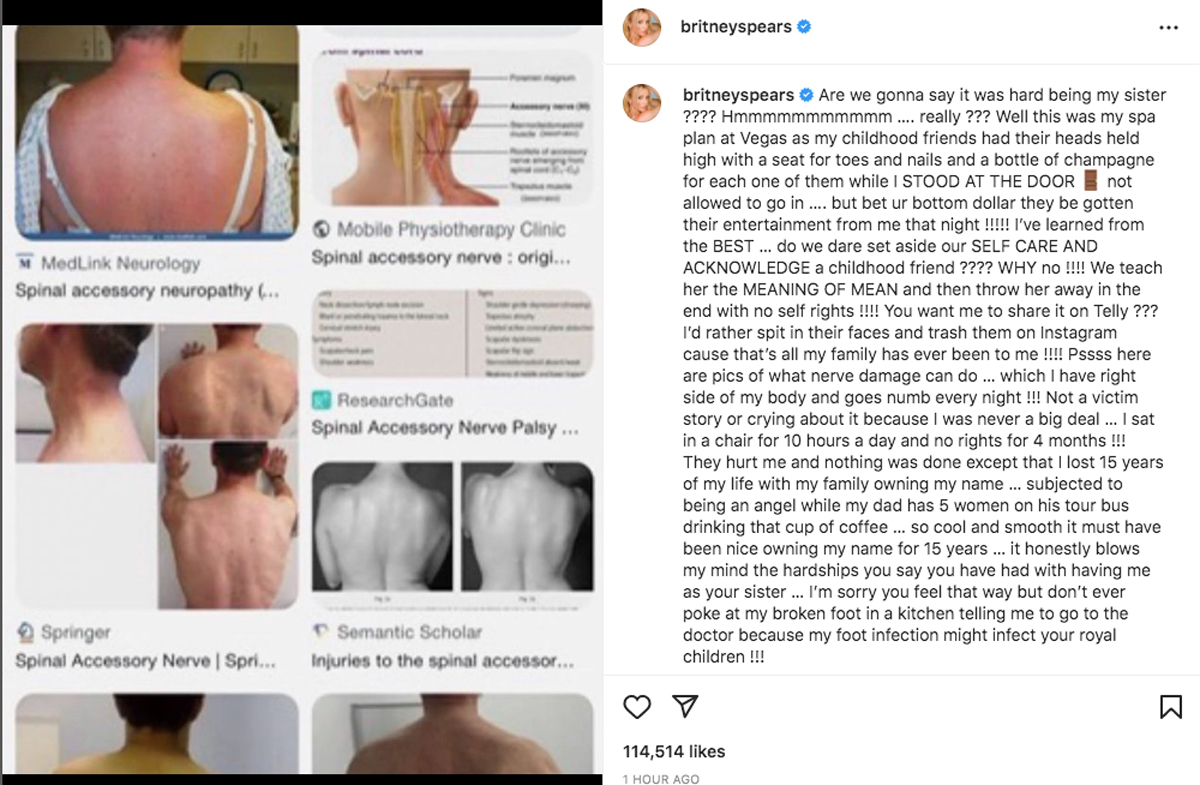 Jamie Lynn hasn’t reacted to Britney’s call-out at this time. Reactions, Perezcious readers? Let us know in the comments below!