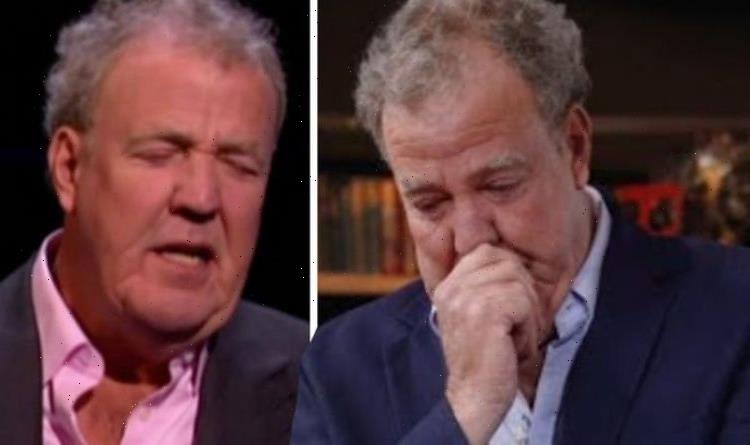 Last week Jeremy Clarkson, 61, was hospitalised following a dramatic kitchen mishap that saw him accidentally slice “half” his thumb off. He had been warned he could lose use of it if he didn’t seek sufficient medical help, and he’s glad he did because he’s now realising just how much he can’t do without it.

I can’t sign my name, and I can’t even wipe my bottom

In his latest column for The Times, the Top Gear legend informed fans of what he had done, and in true Jezza fashion – blunt and bold – uploaded a picture of his bloodied digit wrapped up.

He wrote: “There was an awful lot of news to digest last week, but all I could think about was the seemingly never-ending list of things I can’t do without a functioning right thumb.

“I can’t operate scissors to get a Covid tester out of its packet. I can’t do up button-flied trousers. I can’t open a door.

And it that list wasn’t bad enough, Jeremy admitted: “There are other things I’ve forgotten about, I’m sure, because all I can do as I sit here now is think, ‘God almighty. My thumb hurts so much.'”

It turns out, he was practising making chilli-flavoured crisps that is girlfriend and Clarkson’s Farm co-star Lisa Hogan, could sell in the Diddly Squat farm shop.

Using a special machine called a mandolin, Jeremy detailed how the accident happened – and it sounded very, very painful.

Describing it the mandolin like an “upside-down carpenter’s plane,” he explained: “You slide the potato along it and the razorsharp blade takes a slice off the bottom.

“Then you slide it again and it takes another. And you keep doing this, with much vigour, until eventually your thumb is in the firing line and it take a slice off that. A big slice. A crisp-sized slice.

“I turned and plunged the wound into a stream of icy spring water, which was a mistake because bone is normally surrounded by warm blood and flesh.

“It’s unused to coming into contact with anything cold and responds by sending a message to the mouth suggesting it says ‘f**k’ a lot.”

After the on-site medic dressed his bleeding wound, a “dizzy” Jeremy was told the rather startling news he could lose use of his thumb if he didn’t go to hospital to treat it properly.

“Since the opposable thumb is all that separates us from goats, I decided I’d better do as I was told,” he penned.

Jeremy continued to reveal he was seen by a professor when he got to the hospital in Oxford, who “immediately jabbed what remained of my thumb with local anaesthetic”.

After having it totally numbed to have his digit patched up, he concluded his dramatic tale.

“Today it’s a different story because the anaesthetic is beginning to wear off and it hurts like a bastard,” he seethed.

“And it’s going to continue hurting, apparently, until Christmas Day.

“Speaking of which, have a happy one, and think of me sitting here, with a thumb full of more ingredients than a pizza, unable to open any of my presents or operate a corkscrew.”