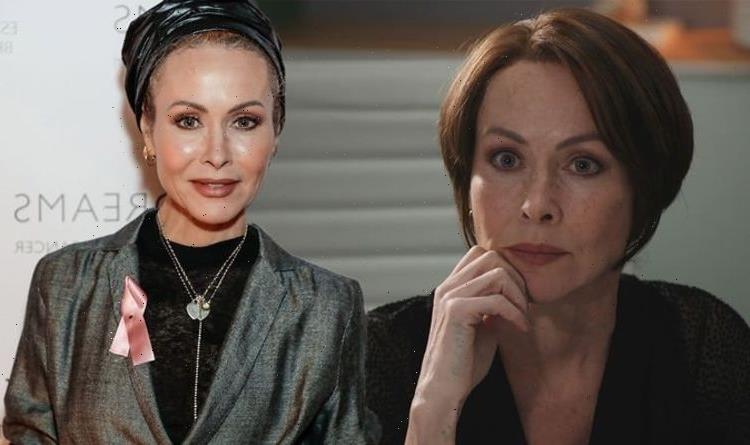 Amanda Mealing, 54, described her growing passion for directing and revealed she would be bringing her talents to the show in future episodes. Aside from her exciting new career ambitions, the star was also keen to talk about her work with WaterAid, as she recently handed in a letter to Downing Street signed by nearly 20,000 people addressing the growing climate crisis.

When asked if she would be making a comeback to Casualty any time soon, the actress revealed that she was indeed coming back but to direct – however teased a possible Connie appearance.

“I’m actually going back to direct at the beginning of next year,” she revealed.

She went on to allude to an acting return as well, saying “I’m going to have a powwow with the bosses on Friday and see what we can do about going back, maybe.”

The star went on to express her sadness over the end of Holby City after 23 years on screens.

She also revealed that, while there might be some hope for Connie’s return in Casualty, the character would not be able to make it back to Holby in time.

“I had hoped to make a trip back there, but because they very quickly need to round up all the storylines, I think it was difficult to try and squeeze a Connie storyline in there,” she said.

“So unfortunately, I won’t be able to make it back before the doors close for the final time.”

Amanda may have left Holby City for good, but she is certainly not done with Casualty, even hinting at which two storylines she might be involved in directing next year.

“I’ve asked for Michael Stevenson, who plays Iain the paramedic,” the star revealed.

“He and I bumped into each other recently. He said, ‘Oh please make sure I’ve got a big storyline in it’.

“So out of the two of them I know I’ve bagsied a storyline with him, so I get to work with him which will be nice.”

Amanda is an established director with several impressive credits under her belt, including Coronation Street, Casualty, The Dumping Ground and a number of short films.

Looking to the future she said: “I’ve actually been directing for a while. It’s something that I think I’ve always wanted to do and the first time I did it, it seemed like a natural progression.

“I’d like to keep going hand in hand with acting for as long as I can, but you know the industry’s a bit harsh on women of a certain age, so I think it’s probably wise to have another career starting on the sidelines.”

Amanda has also been incredibly busy, campaigning for charity WaterAid, delivering an open letter written by Burkina Faso representative Basile Ouedraogo to Number 10, which was signed by nearly 20,000 people.

The letter, which was delivered ahead of the COP26 summit tomorrow, outlines the devastation felt by the poorest communities who get the brunt of our ever worsening climate crisis, despite not having the resources to deal with its severe effects.

The letter called for the government to ensure a third of their international climate fund went to local projects in the most vulnerable parts of Africa, including those that are subject to flooding and drought.

Amanda said: “It’s about helping those communities adapt, because not only is it the poorest communities that are already struggling with clean water issues, but they are now on the frontline of the climate crisis – they’re the ones that have been impacted first and hardest.”

Speaking about the “amazing” people she met on her trip to Ghana in “the most devastating situations”, she continued: “It’s heartbreaking, because water is such a simple thing and such a basic need for everyone.

“I mean, it is an injustice. It’s not right and it’s not fair that anyone should be living in that kind of situation – but it is something that can be rectified.”

An incredible 19,148 celebrities, cross-party politicians and WaterAid supporters have added their names to Basile’s open letter to join OurClimateFight, calling on Boris Johnson and Liz Truss to listen to people most affected by climate change.