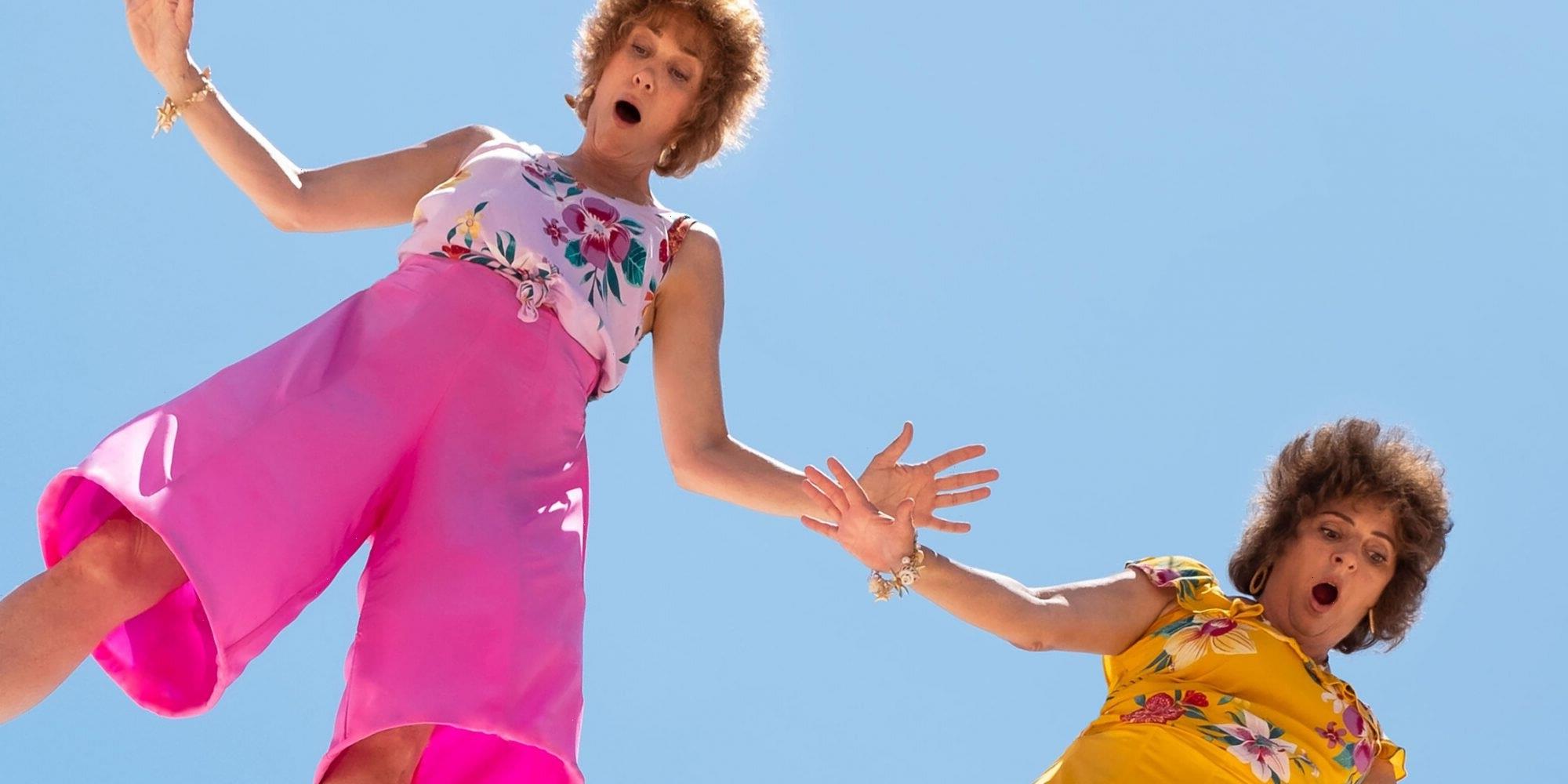 Two summers ago, I was suspended 50 feet above the sand on the shoreline of Mexico in a pair of yellow culottes. I turned to my friend and creative other half, Kristen Wiig, and realized we were thinking the same thing: "We are gonna die."

We were shooting a scene for Barb & Star Go to Vista Del Mar, and it was the part of the movie where our characters jump off of a cliff and our culottes inflate like parachutes, gently guiding us in a swaying, floating motion down to the sand. (I know. You kind of have to see it.) In real life, when you're suspended in a harness, you don't feel weightless or "zippy" like Tinker Bell. You feel every ounce of your actual body weight wrestling with gravity's pull to suck you back down to where you belong, which is the ground, at its desired rate of 9.8 meters per second. I looked over to see the mechanism that was supporting us was not a steely contraption, but rather a tiny man holding a flimsy rope. He looked as if he weighed maybe as much as one of my legs. I thought, "How does his weight counteract our combined body weights?" Kristen and I grabbed hands.

After what felt like an eternity, the director yelled something inaudible, there was a small jerking motion, and we began to fall in a "controlled plummet" to the ground. It was a rush of adrenaline but also complete elation, a kind of euphoria that I don't get in my regular life of running errands and switching out my laundry detergent for a new and improved scent. It was a happiness I maybe hadn't felt since I was a kid, like when I rode my bike down the big hill behind my house for the first time. Kristen and I looked at each other again, and this time we couldn't help but burst out laughing. And it struck me. This is why I do this! This is what I'm in this business for. Because after all, the career path I have chosen as an actress and screenwriter is not for the faint of heart.

I appreciate what a rare occurrence it is when all of this chaos somehow magically comes together and turns into a falling-in-your-culottes moment.

While I feel lucky and grateful that I get to work in show business, and I sometimes make a living at it, I have been knocked around pretty good. And let's just say, there hasn't always been a tiny man lowering me gently onto the sand. There have been some hard, fast, bone-rattling falls. I'll never forget riding in the car on my way to the Oscars for Bridesmaids and having to call my parents to borrow money to pay my rent. Since then, the biz has been everything I was warned about, and I have lived just about every cliché — except the good ones. I've never found myself in a moment of Instagram nirvana, floating on a raft in a bikini and holding a White Claw while hashtagging "Sunday vibes." I tend to "float" while reclined on my sofa in sweatpants with a bottle of Kirkland Signature Rosé between my knees, scrounging for that last piece of microwave popcorn that got lost between my boobs.

In actuality, I pretty much work around the clock. And as a single mom of two, I've learned that writing deadlines don't make allowances for kids having the flu or a school project that requires three trips to Michaels in one afternoon. I turn down acting jobs that could help pay for my kids' college tuition because I can't bring myself to leave them to go to Vancouver for eight weeks or move to Atlanta for six months and trust their sex education to the YouTube gamer that they follow who never leaves his basement. "He makes so much money, Mom! For Christmas can we get a basement, Mom?"

I run around like a hot mess mostly, never knowing what day it is, what time it is, what important thing I have forgotten to do that day, or what I'm supposed to be doing the next. But I keep at it. Because having seen what it takes from the inside, I appreciate what a rare occurrence it is when all of this chaos somehow magically comes together and turns into a falling-in-your-culottes moment. These moments are lightning in a bottle. Whatever that lightning is for each of us, we must fight for it. Maybe even give up our sanity for it. Or dangle from a frayed rope 50 feet above the Mexican shoreline for it. That is why tomorrow, come hell or high water, I will wake up and do it all over again.

Mumolo is the Oscar-nominated screenwriter of Bridesmaids and the star and co-writer of Barb & Star Go to Vista Del Mar.

For more stories like this, pick up the August 2021 issue of InStyle, available on newsstands, on Amazon, and for digital download July 16th.