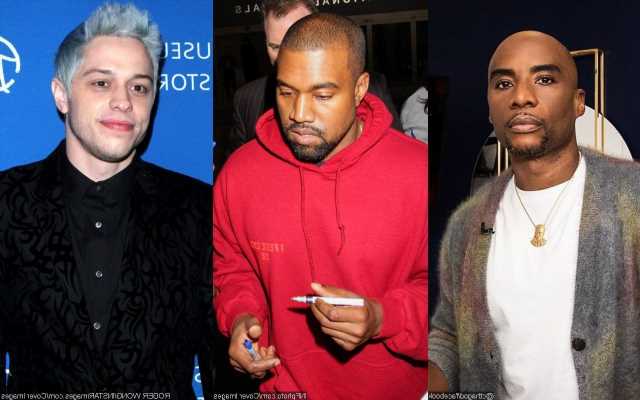 The ‘Breakfast Club’ host puts the Yeezy designer on blast after the rapper criticized him for talking about the comedian’s big member on his radio show.

AceShowbiz –Kanye West continued to make headlines with his controversial remarks. His most recent antics involved Charlamagne Tha God, Pete Davidson and the comedian’s alleged penis size as the “Breakfast Club” host slammed Ye for his comments on the matter.

It started after Ye talked about his beef with Charlamagne during a now-deleted interview on “Drink Champs”. In the episode, the “Donda” artist slammed Charlamagne for going on air and revealing that Kim Kardashian dated Pete because he had a big penis. “Why are you talking about another man’s d**k on camera,” he asked.

Charlamagne fired back at Ye after he caught wind of the interview. He took to his Instagram account to share a clip of him talking about the situation on his show “Brilliant Idiots”. In the video, Charlamagne revealed that he and Ye got into an argument last November because the latter was “basically trying to get me on board to s**t on somebody he knows is my friend – Pete Davidson.”

“He’s screaming on the phone,” Charlamagne further recalled. “What am I supposed to do but laugh at that? … The reason I keep bringing up Pete’s penis on the radio is because I know it f**ks with you. Alright? And you said that to me. But you get on the interview and act like he don’t know where that came from. The motherf**ker is a master manipulator.”

“I Think In Life You Should Always Tell The Whole Story,” he wrote in the caption to his 4.4 million Instagram followers. “There was some context missing from this story told on @drinkchamps so I decided to provide it. Sending Healing Energy To Everyone Who Needs It This Morning. Felt Petty might delete later…….”

Kim, meanwhile, weighed in on the comedian’s infamous BDE (Big D**k Energy) during her appearance in the Tuesday, April 12 episode of Dear Media’s “Not Skinny But Not Fat” podcast. Host Amanda Hirsch asked if she sensed the “BDE that everyone talks about” after they kissed on “Saturday Night Live“, to which Kim replied, “When we kissed, I was just like, ‘Hmm!’ “

Further offering details, “The Kardashians” star continued, “It was a stage kiss, but it was still a little zing.” She continued, “It wasn’t anything like a super, crazy feeling.” The kiss also allegedly made her realize that she hadn’t “kissed anyone else in 10 years.” It prompted the reality TV star to think, “I just got to get myself out there.”