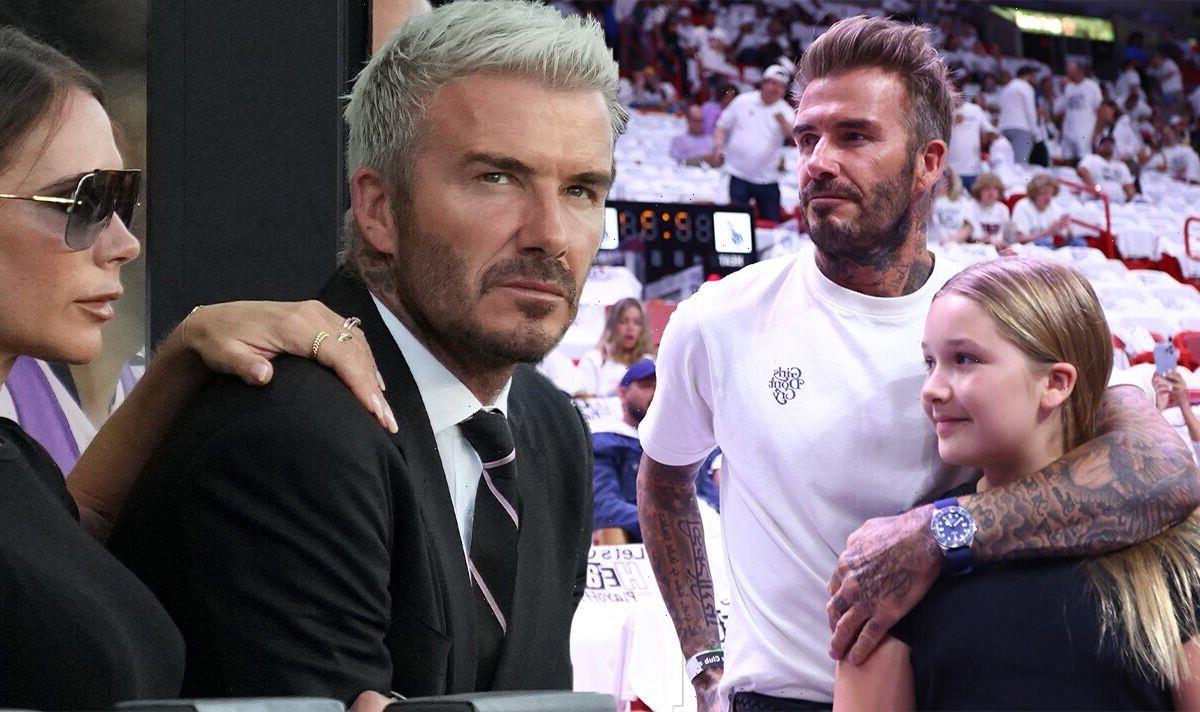 Former football star, David Beckham, was left fearing for the safety of his family after a stalker believing to be his daughter Harper’s mother approached her at school, a court heard. The ex Manchester United player claims he does not know the woman in question, and has insisted that she is not the mother of his four children.

David, 47, felt “threatened and frightened for the safety of his family” due to the alleged stalking incident, Westminster Magistrates’ Court heard at a hearing yesterday.

Sharon Bell, 58, is said to believe that Beckham and his wife Victoria stole her eggs and that 10-year-old Harper is her legitimate child, the court heard.

It is also alleged she is also under the delusional belief that she was in a relationship with the former England footballer.

Sharon turned up at Harper’s primary school in an attempt to speak to her and was also there when Victoria, 48, arrived to collect her daughter, the court heard.

At the hearing yesterday, prosecutor Arizuna Asante said: “[David] felt threatened, he felt frightened for the safety of his family, and he believed this behaviour was targeted and intimidating.”

“He says he does not know the defendant and she is not the mother of his children,” he continued.

The court heard that Sharon did not attend the hearing on account of being in hospital, where she has been sectioned.

After sending a series of letters to the Beckhams’ homes in Oxford and London, Sharon also tried to visit the addresses in July and September last year, the court heard

The Watford woman previously pleaded not guilty to a charge of stalking and is facing trial on 12 July.

Lisa Wilson, Sharon’s lawyer, made submissions about how the trial should proceed in the case that Sharon is not found to be insane by the court.

She insisted that the Beckham family – who will be on holiday during the trial – should be called as witnesses so they can be questioned about the claims.

The lawyer said this would include quizzing Victoria about whether she “conspired with David Beckham to steal the eggs of Sharon Bell”.

Richard Gere, 72, not concerned about being an older dad with wife, 39 [NEWS]

He told the court it would amount to “further harassment of the Beckham family.”

“There is a risk of the family suffering further harassment, alarm or distress because of delusional allegations being put to them,” he said, adding it is in the interests of justice that their statements be read.

As reported by Sky News, the judge then offered a civil interim stalking protection order until the end of the proceedings, which he said were likely to result in a hospital order.

David and Victoria have four children altogether, including three sons that they welcomed before daughter Harper.

Their eldest son Brooklyn Beckham, 23, got married to actress and model Nicola Peltz in a lavish wedding in Miami last month.

Their second eldest child Romeo, 19, appears to be following his dad’s footsteps on the football pitch.

Meanwhile, 17-year-old son Cruz has taken inspiration from his Spice Girls mother and appears to be pursuing a career in music.