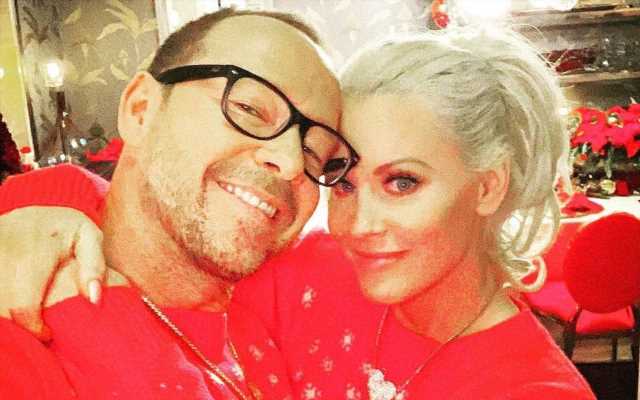 The ‘Blue Bloods’ actor and the ‘Masked Singer’ judge dress casually as they mark their latest wedding anniversary by saying ‘I do’ again in front of family and friends.

AceShowbiz –Jenny McCarthy and Donnie Wahlberg celebrated their latest anniversary with wedding vow renewal, marking the eighth time the couple did so.

Holding the ceremony each year since they tied the knot in 2014, the 49-year-old beauty and her 53-year-old husband – who have both been married before – carried on with the tradition when they marked their wedding anniversary this week.

“Some people ask ‘why do you renew your vows every year?’ Those tend to be the same people that also ask ‘how do you keep your marriage so new?’#happyanniversary @jennymccarthy aka Mrs Wahlberg. I’m so blessed to call you my wife, and so honored to be your husband. I thank god every day for you, and I thank you always for ‘taking care of my heart’ – as promised. I love you. On to forever,” Donnie wrote on Instagram alongside a clip from the ceremony.

The “Blue Bloods” actor added a prayer, heart, and ring emojis to his post before going on to thank those involved in the renewal ceremony.

He added, “Thanks to Reverend Ray (@bellboy47) Michelle McElroy (@mrsmahm) for always coming through and making it magical. @toodelicious444 @jillmele @amysuuuue @vpopovic_ny and to @freyagrant @steveschirripaofficial and the @thegarden team, for helping me pull off this surprise! I knew it would be tough to surprise her again (for the 8th time), but it’s always worth the effort to see her reaction. You guys rock. Thank you! #thankful.(sic)”

Meanwhile, “The Masked Singer” judge Jenny admitted Donnie stunned her with his plans for the ceremony every year.

She said in a message alongside her post of the same video, “Every year you surprise me with our vows and every year I fall deeper into the rabbit hole of love with you. Thank you for making our love a priority and making every day feel like the most ultimate adventure with my best friend, lover and soulmate. You are the #GOAT of all husbands. I love you Donnie and Happy Anniversary, my love.(sic)”

She signed off her post with a heart emoji.

The video showed the pair dressed casually walking into a room before Jenny exclaims, “Oh my God” after Donnie surprised her with the ceremony, with guests heard in the background saying, “Surprise.”

Their minister said in his blessing it was to “reignite” elements in their marriage including “passion,” “romance,” “connecting,” and “deeper intimacy.”

The video posted on Wednesday (31.08.22) then flashed up a montage of throwback snaps of the couple including on their wedding day.

Jenny and Donnie first met in 2012 but didn’t start dating until a year later, before they married on August 31, 2014.