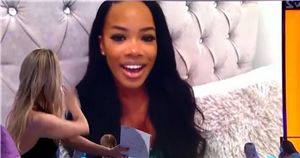 Love Love Island? Our Factor 50 email brings all the goss direct to your inbox

It was her big moment in the spotlight.

But now Love Island's Rachel Finni has been forced to self-isolate at home after being contacted by the NHS track and trace app.

The app has been created to advise people to self-isolate when they have been in close proximity to someone who has tested positive for coronavirus.

And Rachel, 29, ensured she was taking all the proper precautions as she appeared via video link from her comfortable bed for Sunday night's instalment of Love Island: Aftersun.

If she was upset about not appearing live in person, Rachel didn't make it known as she seemed to be in a great mood while talking to host Laura Whitmore.

If anything, Rachel dodged an awkward run-in with fellow dumped Islander Brad McClelland, who she was previously partnered up with on the show.

The luxury travel specialist had her villa experience cut short after Brad McClelland took a U-turn and fell for Lucinda Strafford.

Brad's decision to recouple with Lucinda meant that Rachel was left out in the cold as her chemistry with Teddy Soares, 26, wasn't enough to get the relationship off the ground, and he opted to explore his connection with Faye Winter, also 26, instead.

And speaking on Aftersun, Rachel admitted: "Knowing what I know now. You have to graft to stay in there. I was stupid enough to fall for Brad's graft, because it wasn't genuine."

She went on: "The honest truth is, both guys admitted to me that I wasn't their particular type. There wasn't anything more special with Brad, I picked him because I was more attracted to him.

"I knew I'd be a placeholder. I was a placeholder for Brad to get Lucinda. I wish I gave myself as much of an opportunity as I gave other people. I would've gone for Aaron."

Having had time to reflect on her time in the villa and what fans had seen portrayed on TV, Rachel recently agreed to do a Q&A with her Instagram followers.

When one quizzed Rachel over her regrets while taking part in the sun-soaked reality series, she reminded her 42,000 followers that editors condense 24 hours of footage into one hour-long episode per night.

"I actually want to say no," she considered. "Despite people thinking I was crying and in love, remember things are edited, and you only see bits and pieces."

"I'd say my biggest regret is not grafting enough with other people – despite what you all may think," the dark-haired beauty continued.