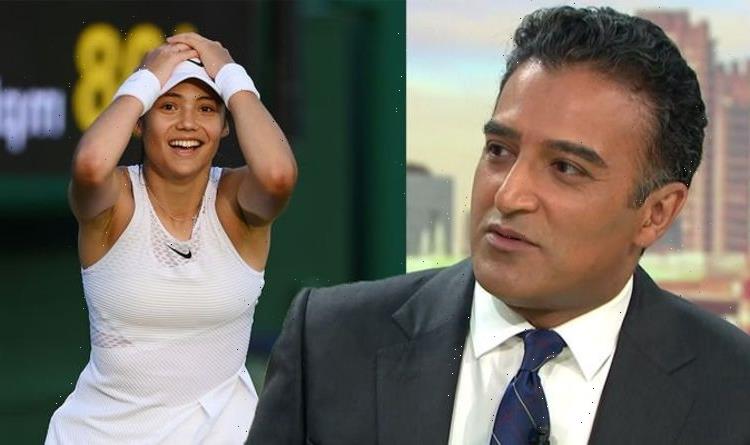 Adil Ray, 47, has caused division on social media after commenting on Emma Raducanu’s, 18, Romanian heritage ahead of her appearance in the US Open Women’s Final this evening. The Good Morning Britain star tweeted that if you’re in the tennis final you are considered “British” however if you have a service job people consider you to be “Romanian”.

Adil tweeted: “If you play in a tennis final you’re British, if you’re a builder/delivery man/waitress etc you’re Romanian.”

People were unimpressed with his tweet and accused him of trying to start a “row”.

“As usual Mr Ray yet again trying to make a row where one doesn’t exist!” One Twitter user commented.

Another added: “Adil I’m supportive of a lot of what you do, but that’s a really poorly thought out nonsense tweet purely designed to invite a negative reaction. Why?”

Adil responded: “Who was I generalising about?”

The user continued: “Suggesting that’s how people think- it doesn’t apply to everyone. I don’t, some do.”

Adil answered: “I didn’t say it did. Well done for not being those that do.”

Emma was born in Toronto, Canada, before she and her family moved to London – where they settled in Kent – when she was two.

Her father, Ian, is originally from Romania while her mother, Renee, is Chinese.

Adil later tweeted: “How many news reports have referred to #EmmaRaducanu as an immigrant/child of immigrants, or Romanian/Chinese.

“It’s important we do. Incredibly powerful. Let’s not just leave those labels for when we are doing “wrong” “lagging behind” or “disadvantaged”. It is us. Our British us.”

Emma is due to play Leylah Annie Fernandez at the US Open final tonight at the Arthur Ashe Stadium in NYC.

“Not only are Emma Raducanu and Leylah Fernandez both teenage grand slam finalists, but they’re also both multilingual,” read a post that Adil retweeted.

He added: “So are many children of immigrants: multiskilled, unique perspectives, incredibly driven, punching up but many of us never say the same about them.

“They’re not integrating, surveyed about their Britishness, talk a bit funny and should feel lucky despite their poverty.”

The 18-year-old has wowed fans in New York over the past week with a stunning run to the finals of the US Open as a qualifier.

Emma almost pulled off the same feat at Wimbledon this summer, bursting onto the scene to reach the fourth round before being forced to retire after falling ill.

The tennis star sought medical treatment but decided it was best to withdraw without completing the rest of the match.

She released an emotional statement at the time citing breathing difficulties.