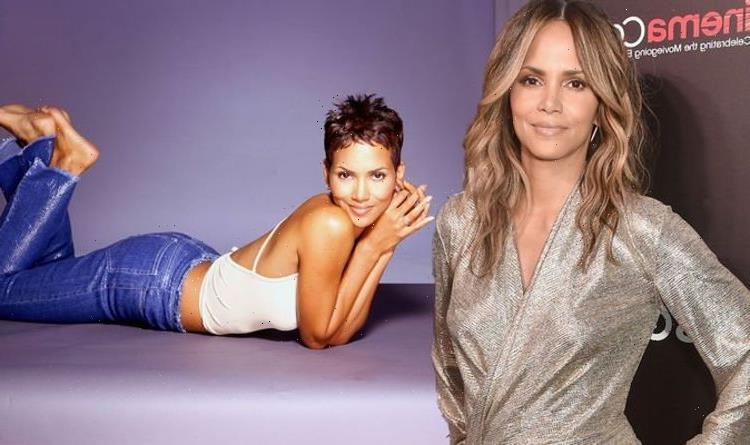 Hollywood actress Halle Berry spoke to British Vogue ahead of this year’s award season. The star is rumoured to be in the running for some best actress nominations following her turn in her directorial debut film Bruised, which was showcased at the AFI Film Festival late last year.

Halle, 55, is the sole black woman to ever win the best actress Oscar in 93 years.

The star won the award in 2002 for her memorable turn as Leticia Musgrove in Monster’s Ball.

Speaking about her first ever audition, however, Halle revealed that she had once been told that she would never succeed in the industry on account of her cutting off her hair.

When the actress was asked about her first ever audition, she revealed that she had gone for a role on TV show Living Dolls, a short-lived sit-com on ABC that ran for one season in 1989.

“It was for a television show called Living Dolls,” she told the publication.

“I decided to cut all of my hair off because all the girls that I saw had long, curly hair.

“My manager told me that I’d never work again. I booked the job.”

Halle has enjoyed an incredibly high-profile career, starring in major franchises including James Bond and X-Men.

Halle starred opposite Pierce Brosnan as Jinx Johnson in 2002 film Die Another Day.

She also portrayed the superhero Storm in the X-Men films between 2000 and 2014.

Halle had a tougher time after playing the titular character in 2004 film Catwoman, which was generally panned by critics.

Nonetheless, the actress has since won roles such as Sofia in 2019’s John Wick: Chapter 3 – Parabellum and Ginger in 2017’s Kingsman: The Golden Circle.

Halle’s new film Bruised tells the story of Jackie Justice, a disgraced MMA fighter that seeks redemption once the son that she abandoned reenters her life.

The screenplay has been written by debut screenwriter Michelle Rosenfarb and directed by Halle herself.

In the film, the star explores the physical profession of MMA fighting itself, as her character works to overcome her own demons.

No female director has ever had an Oscar nomination for best actress for their own film.

Comparatively, there have been 10 instances where male directors have been successful in winning Oscar nominations for their performances in their own films.

Orson Welles was nominated for best director and won best actor for his 1941 film Citizen Kane.

Most recently, Clint Eastwood won best director and was nominated for Best Actor for Million Dollar Baby in 2004, having previously experienced the same outcome for his 1992 film Unforgiven.

Other actor/directors to win nominations in both categories in their films include Warren Beatty, Woody Allen, Kenneth Branagh, Roberto Benigni and Sir Laurence Olivier.

The March issue of British Vogue is available on newsstands and via digital download from Tuesday 22nd February.