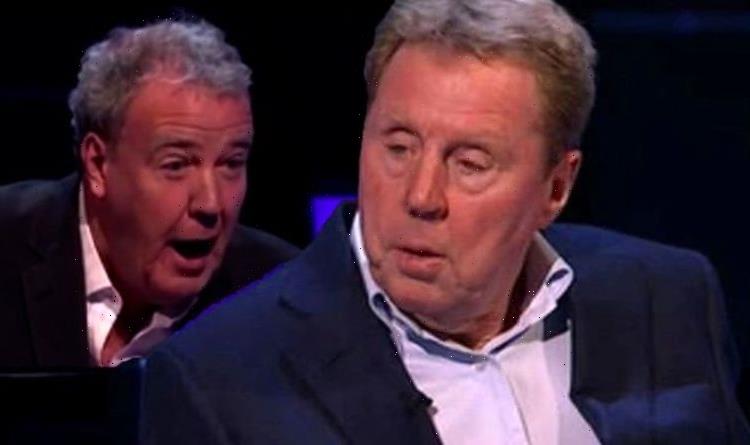 Football legend Harry Redknapp, 74, was left red faced after he failed to walk away with any money during his time on Who Wants to be a Millionaire? The star was devastated by the blunder, but showed he had a heart of gold when he took money out of his own pocket to give to the charity, according to reports.

Harry has managed to become the first celebrity to play on the game show without winning any money for a good cause, but that didn’t stop him from donating the money anyway.

The former football manager and player was said to have left show host Jeremy Clarkson, 61, astonished when he crashed out of the competition early without any money in the bank.

The star was reportedly embarrassed that he only managed to answer three questions correctly, raising a total of just £300 before going bust on his £500 question.

Harry was upset to lose out on the money, as it was intended to go to charity, but he soon fixed things with a generous donation.

“He’d barely been in the hot seat a few minutes,” an inside source told The Sun.

“But he was crestfallen mainly because he’d failed to raise any funds and didn’t hesitate to put his hand in his pocket,” they continued.

“It was certainly a contrast to when he was on another big ITV show, I’m A Celebrity . . . Get Me Out of Here!, which he won.”

Harry is no stranger to televised game shows, even going on to win I’m A Celebrity… Get Me Out Of Here! back in 2018 when the public fell in love with his personality.

The retired celeb, who had never watched the programme before entering the camp, said at the time: “I’m amazed I survived three weeks.”

He added that he was worried he would have nothing in common with his fellow campmates when he first arrived on the show, but that they had helped him to make it through.

“They’ve pulled me up hills, they’ve dragged me through the water,” the former West Ham and Tottenham manager admitted.

The rules of Who Wants To Be A Millionaire? stipulate that a player must answer five questions correctly in order to win a guaranteed prize of £1,000 to take away.

Therefore, by only answering three questions, Harry was unable to secure any money.

It is reported that Harry failed to answer a film-related question correctly during the fourth round of the game.

Who Wants To Be A Millionaire? gained a lot of media buzz last year when ITV released a limited series about one of the show’s biggest scandals.

Entitled Quiz, the drama told the story of Charles Ingram, a former British army major, who caused controversy after being caught cheating his way to winning £1 million on the game show.

Among the cast were Succession’s Matthew Macfadyen and Fleabag’s Sian Clifford as the notorious husband and wife duo.

Michael Sheen played long-time quiz host Chris Tarrant, who has since been replaced by Jeremy Clarkson on the new reiteration of the show.

The episode of Who Wants To Be A Millionaire featuring Harry Redknapp airs tomorrow at 9pm on ITV.