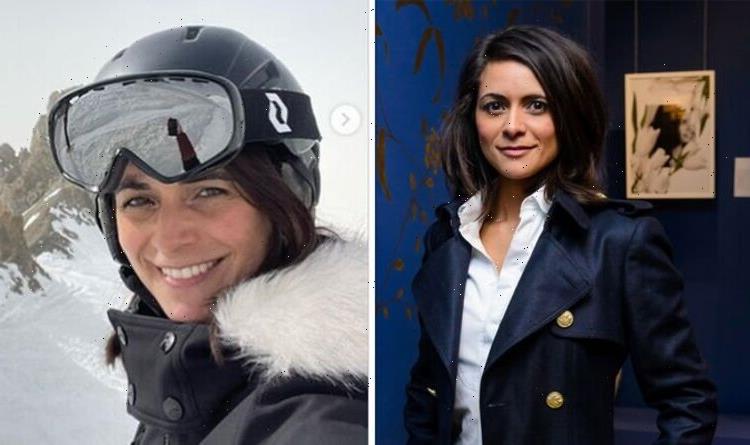 Lucy Verasamy, 41, has issued a warning that the sunshine Britain has been enjoying recently isn’t here to stay, unfortunately. Temperatures are set to plummet, meaning bad news for those who were hoping for more sunshine in the coming days.

Lucy has said “colder air incoming” on her social media accounts, where she has also posted some holiday snaps from her skiing trip.

Lucy added: “Spring is fickle! Colder air incoming – snow in the forecast this week (for the UK & the Alps).”

She also posted a snowflake emoji alongside the message in view of her 171,000 Twitter followers.

The posts were made on Monday morning.

In the series of images, taken in Tignes, France, Lucy can be seen posing in the French Alps in the first snap.

There is also a snap of the Tignes – Val d’Isère ski resort.

Later that same day, Lucy also shared a post from the Met Office on Twitter, which showed ‘blue hues’ on the chart.

Sharing how the sunshine affects her mood in a positive way and makes a “huge difference,” Lucy urged her fans to walk on the sunny side of the street when they can.

She took the selfie while out on a walk in the sunshine.

Lucy appeared to be in a really good mood and compared the snaps with one from when the weather was colder and she certainly wasn’t smiling.

In the selfie which was taken in warmer weather, Lucy could be seen smiling from ear to ear.

Lucy captioned the post: “Winter in the shade, summer in the light this time of year.

“Choose the sunny side of the street. HUGE difference!!”

She added: “Summed up by a quote by Charles Dickens in 1880: ‘It was one of those March days when the sun shines hot and the wind blows cold: when it is summer in the light, and winter in the shade.’ Great Expectations.”

On Monday, BBC Weather forecaster Chris Fawkes warned that there are sub-zero chills forecast for the rest of the week.

This will be a big change compared to the weather Britain has been having.

Mr Fawkes said: “We’ve had quite a prolonger run of dry and sunny weather.

“Temperatures last week reaching as high as 21C but this week is set to get a lot colder.

“Cold enough for some of you to even see a little bit of snow later on in the week, would you believe it. For now, we’ve got quite a bit of cloud across the West Midlands, parts of Wales, west England working into the Irish Sea.

“Across the Isle of Man, and into eastern counties of Northern Ireland so a bit of mist with that, could find the odd patch of drizzle.”