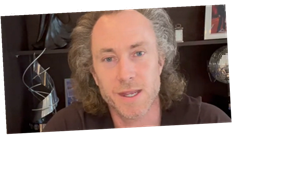 Want the most up-to-date celebrity exclusives sent straight to your inbox every day? Sign up now and join the club!

After losing his father Alan in March, James Jordan has returned to social media for the first time since his tragic death.

The professional dancer, who admitted he wished he and wife Ola had children sooner, shared a video on his Twitter and Instagram accounts on Saturday for his fans to see.

The 42 year old began: "I haven't been on social media for quite a long time now because my father unfortunately passed away on 13 March at 8.05am.

"I've been totally devastated. I did try and do this post before, but I wasn't able to because I was too upset.

"This could potentially change your life or someone in your family's. My dad had a stage four brain tumour – a glioblastoma," he explained.

"He was diagnosed approximately one year ago and myself and my family slowly watched him disappear."

The former Strictly Come Dancing star went on to share the anguish about the disease striking his father.

He continued: "It's an absolutely horrendous, horrendous disease. Cancer is awful no matter which cancer it is but brain tumour is particular takes away that person's identity a lot.

"Brain tumours are the biggest cancer killer in children and adults under 40. Out of £600million raised in the UK, less than three per cent goes to brain tumour funding for treatments.

"I want to change that because I don't want any of you guys to go through what I and my family went through," James heartbreakingly shared.

The television personality revealed he will be shaving off his hair on his birthday, 13 April, for a brain tumour charity.

"Hopefully we can do something good from it. Many of you have been pointing out how horrendous it looks.

"I'm going to shave it off totally and all I want from you guys is to raise as much money as I can," he expressed.

The dad-of-one, who broke down while appearing on Loose Women, shared the sad news of his father's passing on Instagram.

"My dad became an angel at 8:05am. I will forever miss him. He will always be my hero. RIP Daddy," the Celebrity Big Brother star penned.