Three words: Jennifer freakin’ Lopez. Is that enough to get your attention? Great! Because I am here to let you know that 2020’s Super Bowl halftime show performer and 2022’s most iconic bride is Filthy. Stinkin’. Rich.

With a career spanning more than two decades that highlights her talents in singing, acting, and dancing (we love a good triple threat!), J.Lo is literally the GOAT. She got her start back in 1991 when she auditioned for and secured a role on In Living Color as a dancer before moving on to become a backup dancer for THE Janet Jackson.

But because Jennifer Affleck has always been ambition personified, she wanted more from her career as an entertainer. Enter: 1997’s Selena, in which J.Lo gave a stunning performance playing the late singer Selena Quintanilla. If you know anything about this film, you’ll know it served as a launching pad for the rest of J.Lo’s career and helped her become the first Latina woman in Hollywood to make over $1 million on a single film. Impressive is an understatement! 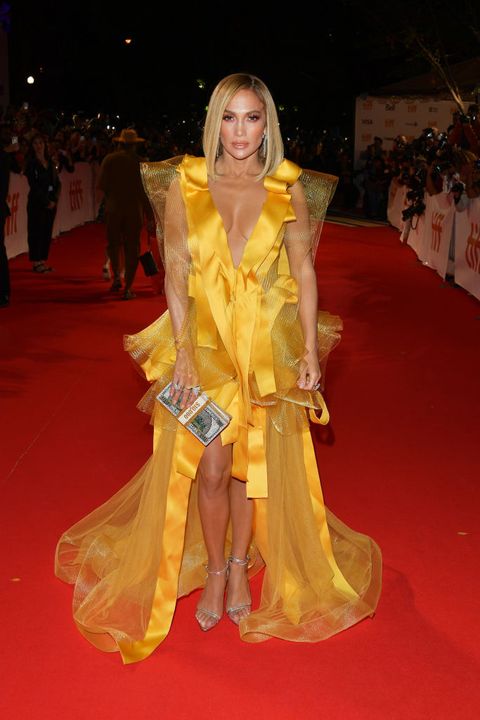 And in case you were wondering, J.Lo’s pretty much been busy making money in the decades since then, TYVM. If you’re curious about exaaaaactly how much, here’s a lil breakdown of her money moves, which will have you filling up your empty wallet with a pool’s worth of tears.

First of All, J.Lo’s Been in a Sh*t Ton of Projects

Did you know that J.Lo has been over FOURTY-TWO movies and TWENTY-TWO television programs??? Whelp, you do now! J.Lo’s 2019 film, Hustlers, made a whopping $100 million worldwide as of October of that year, meaning it’s likely made way more moolah since then. Honestly, not too shabby for something she both produced and starred in.

Her Music Endeavors Make Bank Too

Ever heard of a little album called On the 6? Duh, of course you have! J.Lo’s debut record spawned some of your favorite bops like “Waiting for Tonight,” “If You Had My Love,” and “Let’s Get Loud.” The record *also* just so happened to go triple platinum and sold more than 8 million copies worldwide. And because she literally just can’t seem to stop releasing hit after hit, the singer has released seven more studio albums (!!!) since, which, in total, have sold more than 75 million copies.

Oh, and let’s not forget about her residency! Back in 2016, J.Lo embarked on her All I Have Las Vegas residency, which spanned 121 shows through September 2018. It earned her a totally-casual $101.9 million, making her Vegas residency the sixth highest-grossing one of all time and the top-grossing residency by a Latin artist. *Cue the applause*

‘Kay, a Note on the Super Bowl

J.Lo and Shakira (FYI, both singers co-headlined the halftime show in 2020) made $0.00 for their literal watershed performance. At least from the NFL, which has a general rule of not paying performers. To quote an NFL spokesperson who chatted with Forbes: “We do not pay the artists. We cover expenses and production costs.” Mkay, noted!

Now, I know you’re currently like GIVE J.LO HER MONEY, but here’s the thing: the artists who perform at the Super Bowl not only get a major platform on one of the world’s biggest stages, but they can also expect to see a huge increase in their music sales post-show. In Jennifer’s case, Spotify said that her streams soared by 335 percent afterward. So fine, I guess. I’ll allow it!

Did You Know She Makes Perfumes and Beauty Products?

I mean, duh. Which celebrity doesn’t have a fragrance at this point? But unlike other stars, J.Lo has 25 different scents that make up her insanely lucrative $2 billion fragrance franchise, WWD reports. The A-lister released her newest fragrance, Promise, in September 2021.

And if you want anything else to go with that purchase, don’t worry—J.Lo’s gotchu! She has a line of beauty products from her J.Lo Beauty collection available for purchase at Kohl’s.

She’s Already Made So Much Money This Year

Recently, J.Lo has come out with a ton of new projects that are def on track to make her a lotta money. On top of that impressive shoe line she designed with DSW, she’s also an investor and the chief entertainment and lifestyle officer of Richard Branson’s cruise line, Virgin Voyages, and was more recently the face of Coach’s Spring 2022 campaign with Megan Thee Stallion. Truly all I see is 💸💸💸 in the A-lister’s future, but I, for one, am far from mad about it!

Unless you’ve been living under a rock for years, you know that J.Lo and A-Rod are no longer a couple, whomp! However, if she had married him, she would’ve been the wife of one of the highest-paid pro athletes of all time, according to Celebrity Net Worth, which determined that his own valuation hovers around the $350 million mark.

Dry your tears though—J.Lo seems to be doing just fine because: 1. She literally doesn’t need a man to be financially stable, she is Jennifer Lopez and 2. Earlier this year, she got married to another impressive star you may or may not have heard of, LOL. Does Ben Affleck ring a bell? The actor currently has a net worth of a cool $150 million per Celebrity Net Worth, so yeah, Jen is doing juuuuust fine.

^^The vibe is unbothered (and rich…*very* rich)!

So, What Is Jennifer Lopez’s Total Net Worth?

Oh, just a whopping $400 million according to Celebrity Net Worth. Furthermore, J.Lo allegedly rakes in $40 million per year, which is honest to god so depressing for me because I, a mere mortal, make way less than 0.5 percent of that annually. But it’s okay, I am fine! It’s totally fine!

That said, please excuse me while I weep over my empty wallet and J.Lo laughs her way to the bank.