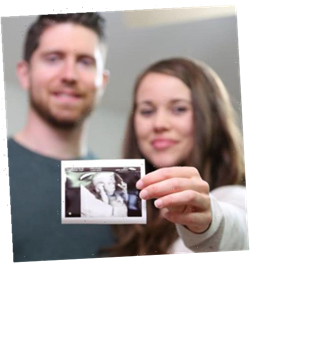 Jessa Duggar and Ben Seewald would like your attention.

They have a very special announcement to make.

It may not come as a huge surprise to those that have been paying close attention, but that doesn’t make it any less blessed and/or miraculous.

Oh, well, we’re still gonna come out and scream it from the virtual rooftops:

Jessa Duggar and Ben Seewald are expecting another child!!!!!!!!!!!!

“We’re looking forward to summertime, and here’s our #1 reason! Thank you, God, for this precious gift!” wrote the couple as a caption to the ultrasound photo below.

They included the hashtag #RainbowBaby” along with the message because Jessa sadly suffered a miscarriage in 2020.

“After the heartbreaking loss of a baby last year, we’re overjoyed to share that another little Seewald is on the way.”

No word yet on whether Jessa is growing a boy or a girl inside of her womb.

In early December, a bunch of astute observers wondered whether or not Jessa was pregnant… simply based on a photograph of her in sweat pants.

It seemed silly at the time.

However, if Duggar really is due this summer, then she likely did have a bun in her oven at the time.

We apologize for making fun of anyone who jumped to this conclusion — even if it is sort of rude and inappropriate to spread pregnancy rumors about a woman on the Internet prior to confirmation.

“The pregnancy is going smoothly, and both baby and Jessa are doing well,” added Duggar and Seewald when speaking to TLC today.

“We are so grateful to God for the precious gift of a new life!

“The kids are delighted, and we can hardly wait to welcome this little one into our arms this summer.”

Jessa and Ben got married in November of 2014 in Arkansas.

Their relationship was documented on 19 Kids and Counting until it went off the air in 2015, at which time they then joined the family TLC spin-off, Counting On.

The pair welcomed their first child together in 2015 and have remained committed to a great deal of pro-creating ever since.

“Spurgeon and Henry are very excited. They understand,” Jessa tells this cable network.

“We have little pregnancy apps on my phone that we look at and they get to see updates of the baby’s progress and growth.”

Jessa and Ben’s impending child will be the latest addition to the Duggar family, becoming Jim Bob and Michelle’s the 21st grandchild.

In an inexplicable and related gender run, Jessa gave birth to Ivy in May 2019.

Since then, six baby girls have been born into the family, with Kendra Duggar expecting the seventh this month.

Will Jessa and Ben keep this pattern going?

Or will they break it up with a son?

The husband and wife have yet to find out the gender of their forthcoming child while he/she has been in utero, but Jessa now hints this could change with baby number-four.

Whether it’s a boy or a girl, however, we’re certain the kid will receive a great deal of love.

And alsoo a great number of hand-me-downs.

Congratulations to the entire immediate family!

We can’t wait to meet this bundle of joy in a few months!