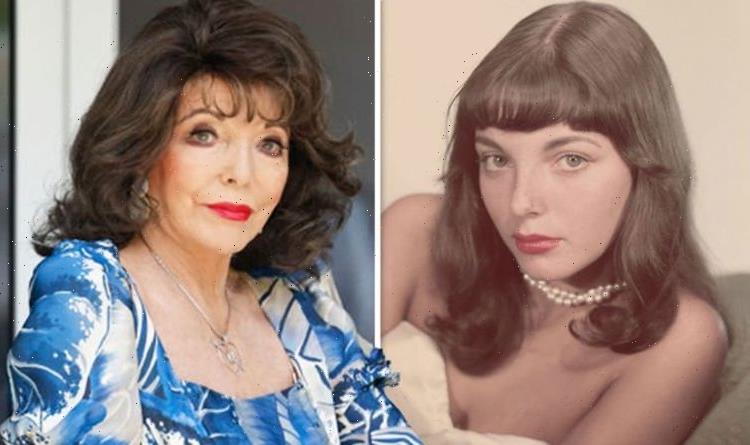 Dame Joan Collins has opened up about her five marriages in a candid documentary, This Is Joan Collins, set to air tonight on BBC Two. The Dynasty actress made a shocking revelation as she spoke frankly in the new feature film.

The 88-year-old revealed how her first husband Maxwell Reed tried to pimp her for £10,000 a night as she dished on the details of their fraught marriage.

The on-screen star shared how she married the late actor out of “shame” after he raped her on their first date.

The veteran star said she is a “survivor” as she detailed her past traumas in the documentary.

After she starred as a rebellious teenager in I Believe You, Joan was introduced to her first husband Maxwell, who was 14 years her senior.

Joan explained that she was still a virgin when she went on a date with the famous film star and was offered a drink while at his home.

Speaking on the documentary, she explained: “He had an American accent which was quite odd for a man from South London.

The actress went on to explain that he took a bath but beforehand, he gave her a rum and coke to drink – which had been laced with drugs – and some books to read.

“The next thing I knew I was flat out on the sofa and he was raping me,” she said.

“In those days, my mother would have said I was ‘taken advantage of’. Now we call it date rape.”

Joan carried on seeing him and, months later, accepted his proposal of marriage.

“Had I not been so innocent about sex and the way things should be I wouldn’t have done that, but I had a strong sense of guilt, so I did it,” she says.

“The honeymoon was a fiasco. We looked outwardly happy but underneath I was miserable.”

As Joan’s prominence began to rise in Hollywood, her marriage began to fall apart.

She explained that the final straw came when Maxwell had attempted to pimp her out to an Arab Sheikh.

She said: “He gravitated towards rich old men and that night I found out why.

The actress later filed for divorce from her ex-husband and threw herself into Hollywood life.

Joan married her fifth husband, Percy Gibson, in 2002 in Claridge’s Hotel in London.

This is Joan Collins airs tonight on BBC Two at 9pm.