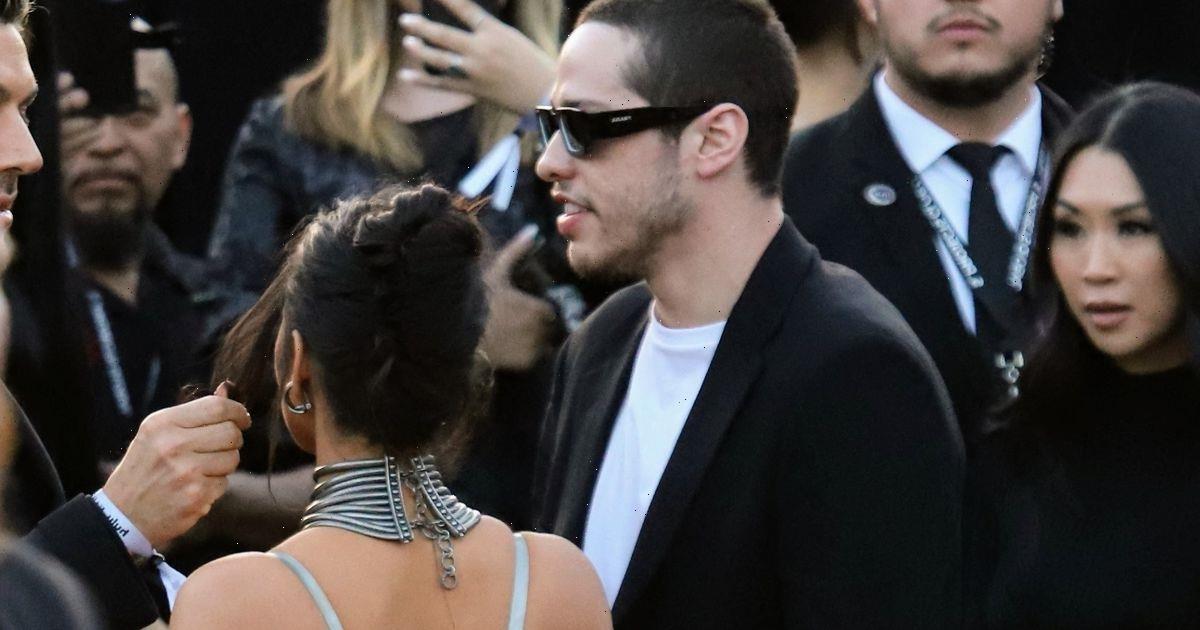 Kim Kardashian and Pete Davidson are one of showbiz’s hottest new celebrity couples and the pair aren’t shy about flaunting their romance.

Pete stepped out to support his famous girlfriend on Thursday night as they made their red carpet debut at the premiere of her family’s new Hulu series, The Kardashians in LA.

The couple held hands and sweetly gazed into each other’s eyes as they arrived to the event. 41 year old Kim flaunted her famous curves in a figure hugging grey latex dress with a long fishtail skirt.

Her raven tresses were swept back into an elegant bun and she wore a matching choker necklace and wrist cuffs.

The SKIMS founder’s makeup was typically flawless with brown eyeshadow, fluttery black eyelashes and nude lipstick, with pink blush highlighting her cheekbones, and she looked happy as she posed for the cameras.

Comedian and Saturday Night Live star Pete, 28, looked dapper for the occasion in a simple black suit which he paired with a white T-shirt, sneakers and sunglasses as he helped his girlfriend of around seven months navigate the red carpet.

The loved-up couple have been dating since around October 2021 after Kim guest-hosted Saturday Night Live that month.

Despite facing a hard time with numerous social media outbursts from Kim’s ex-husband, Kanye West, the couple seems to be going from strength to strength, with Kim making it ‘Instagram official’ on March 11, to the delight of her 299million followers.

Pete has since met her kids, and was snapped this week taking Kim’s daughter North, eight, out on Kim’s pink electric car which was gifted to her by her mother Kris Jenner, 66, at Christmas.

Kim recently gushed about her new romance in an interview with Robin Roberts on ABC news, in a special to promote the Kardashians’ upcoming show, which airs on April 14.

In a teaser for the special, Kim said: “I am a relationship kind of girl, for sure, and I wouldn’t be with someone if I didn’t plan on spending a lot of my time with them. Obviously, I want to take my time, but I’m very happy and very content. And, it’s such a good feeling to be at peace.”

Kim’s mum Kris Jenner and sister Khloe Kardashian, 37, gave their seal of approval on Kim’s relationship, with Kris saying “Pete’s great. He’s a really nice guy”, whilst Khloe said, “he just makes her laugh. And she laughs all the time.”

For the latest updates on your favourite celebs, sign up to OK!'s daily celebrity newsletter.