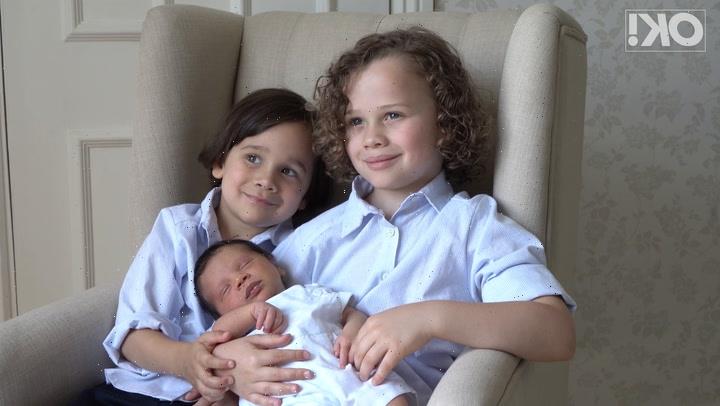 Kimberley Walsh has shared a series of sweet snaps of her baby son Nate, who has recently been struggling with a cough, as she marked him reaching another milestone as he reaches five months old.

The mum-of-three posted an adorable birds-eye view of her little boy in a knitted basket, dressed in a tan two-piece outfit.

In another image, Girls Aloud star Kimberley, 39, showed her youngest son dressed in a light blue pyjama set, as he was propped up against the star's cream sofa.

Already sporting a full head of tousled brown locks, Nate gave a cute smile to his mum as he posed.

Kimberley also shared images of all three of her sons cuddled up together, as they grinned for the camera along with a family member holding Nate when he was just a newborn barely able to open his eyes.

"Five months of magic," Kimberley captioned the adorable post, and friends and fans flocked to the comments to share their well-wishes.

"Where does the time go? My little girl is 6 months old today," another fan shared.

While one person gushed over all of Kimberley's children, saying: "5 month milestone gorgeous boys."

Kimberley is mum to sons Bobby, six, Cole, four, and little Nate, five months, and she shares them with husband Justin Scott.

The married couple tied the knot in 2016.

The couple welcomed their third child into the world in the world-famous Lindo Wing at St Mary's Hospital, London on 28 May.

In the months following their little boy's birth, Kimberley and Justin revealed that their family was now "complete" and they wouldn't be trying for more children.

The Girls Aloud star also revealed that her sons have all bonded brilliantly, as she told OK!: “They just had this instant attachment and love.

"We have a step in our hallway and it’s the exact same spot we showed Cole to Bobby," adding that Bobby even came down one night at 3am to ask his mum if she needed help with the baby.

For all your latest updates on Kimberley Walsh, sign up to OK!'s daily newsletter.