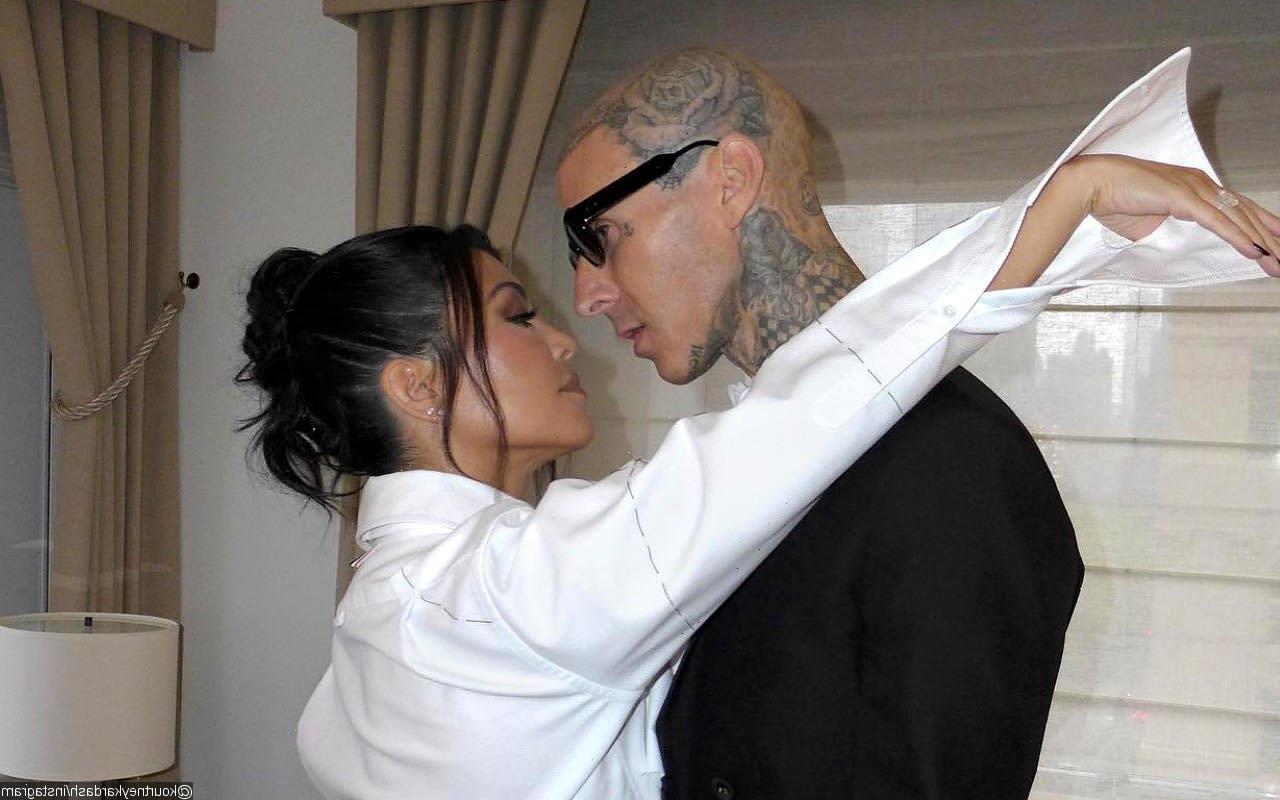 A month after they had a ‘practice’ wedding in Las Vegas, the ‘Kardashians’ star and the Blink-182 drummer legally wed in a small ceremony on Anacapa before holding their lavish Italy nuptials.

AceShowbiz –Kourtney Kardashian and Travis Barker are officially wife and husband now. The couple said their “I do” in a small courthouse wedding in Santa Barbara over the weekend, just a month after they had a “practice” wedding in Las Vegas.

According to TMZ which first reported the news, the pair got the legal paperwork in order on Sunday, May 15 in a downtown courthouse on Anacapa. They were spotted exchanging vows on the steps of the courthouse.

The ceremony was attended by a few close friends and family members, including Kourtney’s grandma and Travis’ dad. There were also bodyguards and other witnesses who were on hand to keep things in order during the private affair.

The reality TV star was seen wearing a traditional white dress. She kept it simple in the short dress while still wearing a white veil. As for Travis, he wore an all-black tuxedo. Their pair posed on the front of a black lowrider convertible, which had a sign strapped to the front grill that reads “JUST MARRIED,” before leaving on it.

While the other famous Kardashian-Jenner members were not seen at the Santa Barbara wedding, they likely won’t miss Kourtney and Travis’ upcoming lavish wedding. The couple is set to hold a big celebration in Italy in the near future.

“They had to legally get married first ahead of their big Italian wedding, which is happening very soon,” a source tells PEOPLE. “All the details are set and the whole family, including all the kids, are very excited.”

Back in April, Kourtney and Travis surprised everyone with their impromptu wedding in Las Vegas after the 64th Annual Grammy Awards. The mother of three, however, later confirmed that they were not legally married at the time.

“Once upon a time in a land far, far away (Las Vegas) at 2am, after an epic night and a little tequila, a queen and her handsome king ventured out to the only open chapel with an Elvis and got married (with no license),” the 43-year-old wrote while sharing photos from the unofficial elopement. “Practice makes perfect.”