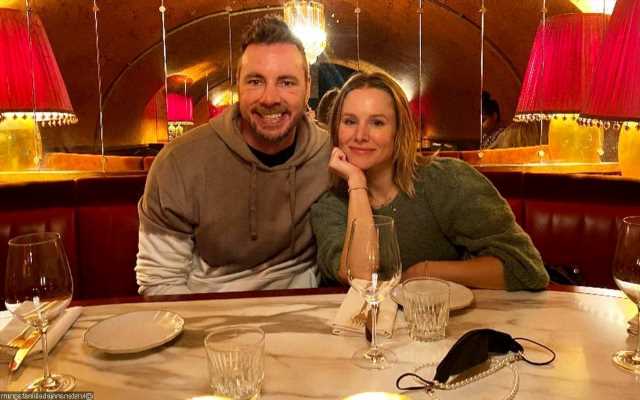 The couple appears in a new episode of ‘The Ellen of DeGeneres Show’, in which Dax opens up about his new celebrity crush after years of crushing on Brad Pitt.

AceShowbiz –Kristen Bell is a supportive wife for her husband Dax Shepard. The couple appeared in the Monday, November 15 episode of “The Ellen DeGeneres Show“, in which Dax opened up about his new celebrity crush after years of crushing on Brad Pitt.

“I’m embarrassed to say, I did what these old men do, I got a younger model. Because Danny’s only 31,” Dax said of Australian Formula One driver, Daniel Riccardo. He then shared that they “kind of hit it off” after Daniel appeared on his “Armchair Expert” podcast.

Dax added, “I pushed hard, got a phone number. We’ve just really been building this thing that’s culminated in us seeing the world together, really,” before sharing photos of the two spending time together. One picture saw the two donning matching overalls, while another picture featured them holding hands while sightseeing in London.

Kristen was nothing but supportive for the budding bromance. “They’re really cute. I fully support this,” she said.

Dax also recalled when he jumped off a bridge and into the river in Austin, Texas while Daniel and other friends were tubing. “I thought he was so impressed because he’s a Formula One driver telling me to be more careful. It was a real feather in the cap,” the podcast host said. “And then I have since realized he’s just worried because I’m old as hell. I’m 46, I could be his father. He wasn’t worried it was too shallow. He just thought I might break something.”

While Daniel might think that Dax is weak, Kristen has plenty of praise for her husband. “Isn’t he a hunk? Look at this guy!” she raved about Dax’s new muscular physique. “Now he’s a big boy. I’ve got no complaints!”