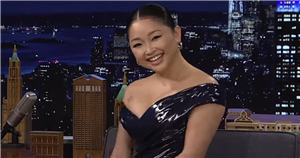 Lana Condor is floating on cloud nine after getting engaged to Anthony De La Torre. During a stop on “The Tonight Show Starring Jimmy Fallon” on March 28, the “Moonshot” actor gushed about De La Torre’s Christmas Eve proposal, the special meaning behind her engagement ring, and how she and De La Torre first met at an Emmys party in 2015.

“I secured the rock. My work here is finished,” she joked about her engagement, which she announced back in January. “On Christmas Eve, he was setting up this dinner on the balcony, but I thought it was Christmas Eve dinner because I thought Christmas Eve was reserved for baby Jesus.” Much to Condor’s surprise, De La Torre ended up getting down on one knee that night. “It was amazing. I’m so happy,” she added.