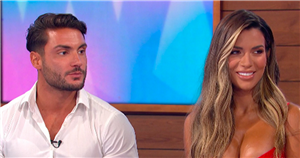 Love Island winners Ekin-Su Cülcüloglu and Davide Sanclimenti are hoping to get a place together in the next few months.

The Turkish actress, 27, says leaving the villa has brought her and Davide “closer” since winning the show.

The pair won over viewers with their fiery relationship that evolved during this summer's series, with ITV revealing they had been the clear winners of the public vote with a whopping 63.7% share.

Speaking on Loose Women on Monday following a very dramatic reunion show, Ekin-Su said that although she and Davide were close during the show, she thinks that leaving has brought them “a lot closer”.

During the interview, which viewers branded uncomfortable following Ekin-Su's awkward exchange with panellist Nadia Sawalha, Davide added that coming out to reality was “not scary” but that they were getting “a lot of attention from everyone”.

While they confirmed that they were not living with one another currently, they are “always together” following the end of the show last week, with Ekin-Su revealing they have plans to move in together in "probably September, October time" this year.

The couple had a passionate on-and-off again relationship while on the dating show which saw them both explore other potential partners including islanders Jay Younger and Mollie Salmon.

Reflecting on how the Casa Amor villa tested their relationship, Ekin-Su added: “In relationships, you’ve got to make mistakes, to know it’s right you have to have these tests.

“And in real life, whether you have a normal job, day to day walking on the street, you have to trust your partner.

“And there’s going to be people who are going to try it on you and I feel like Casa Amor was that big test.

“And the fact that whether Davide came back alone or not, that was a test for him.

“My test was with Jay, that was kind of my Casa Amor experience and there was, like, obviously people at Casa Amor but literally my heart and my head was at the villa.”

Davide also explained that he wanted to ensure he was choosing her for the right reasons: “I always said for myself, ‘If I want to choose Ekin-Su, I want to choose her on top of everyone else not just because she’s the only girl that I fancied inside the villa’.

“So actually, what I did with Molly in Casa Amor is actually been a confirmation that I actually felt something for her. I realised that what we had was unique.”