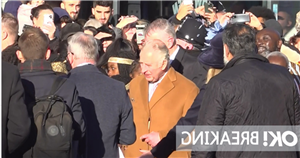 A 21 year old man has admitted throwing an egg towards the King during a walkabout in Luton because he thought the monarch’s visit to a “poor area” was in “bad taste”.

Harry May pleaded guilty at Westminster Magistrates’ Court on Friday to a Section 5 public order offence relating to the incident on 6 December.

Prosecutor Jason Seetal said police had detained May after seeing him hurl a projectile towards the monarch, which landed on the floor nearby as the King spoke with members of the public.

Mr Seetal said when officers interviewed him, he told them “he did this because he believed the King visiting a town like Luton, which is a deprived and poor area, was in bad taste and he wanted to make a point of this”.

May sat in the dock wearing glasses and a navy jacket and remained expressionless as the facts were read out to the court.

The ordeal occurred last month, with May going on to be arrested at the scene.

Charles had been temporarily steered away from the crowds outside Luton Town Hall by his security staff shortly after arriving.

He then resumed shaking hands with members of the public after being moved to a different area.

A similar incident occurred in York a month prior as another member of the public attempted to hit Charles and wife, Queen Consort Camilla with eggs.

The King and Queen Consort were being welcomed to York by city leaders when a protester threw three eggs at them, all of which missed before the pair were ushered away.

The man was heard to shout “this country was built on the blood of slaves” as he was being detained by around four police officers.

Other people in the crowd started chanting “God save the King” and “shame on you” at the protester.

The suspect was later carried away in handcuffs, with his legs bound by two uniformed officers, who put him in the back of a police van.