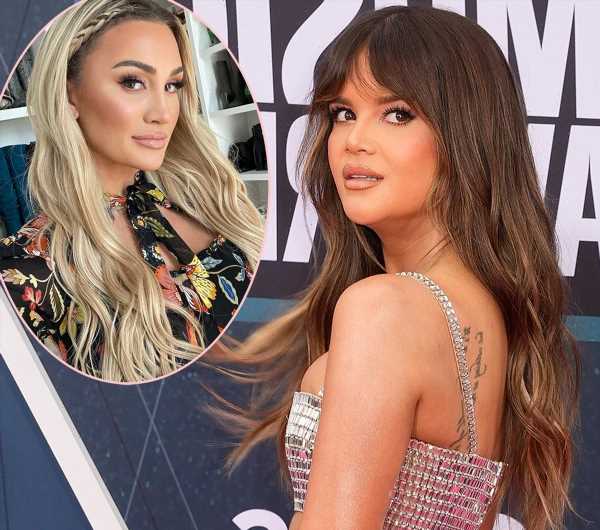 Maren Morris is getting real about why she didn’t hold back in calling out Brittany Aldean.

By now, you most likely know that the Grammy Award winner made headlines last month for her feud with Jason Aldean’s wife over a transphobic comment the latter made on Instagram. Brittany had captioned a makeup video posted on the platform at the time:

“I’d really like to thank my parents for not changing my gender when I went through my tomboy phase. I love this girly life.”

Having a tomboy phase is NOT the same thing as identifying as transgender. Equating the two shows a lack of understanding and perpetuates fear against the transgender community.

“It’s so easy to, like, not be a scumbag human? Sell your clip-ins and zip it, Insurrection Barbie.”

The heated exchange quickly sparked a back-and-forth online confrontation between Maren and Brittany. Later on, the 33-year-old even appeared on Tucker Carlson Tonight to address her problematic comments – which she claimed were “taken out of context” (seriously????) – and continued to double down on her stance regarding the matter:

“I’m advocating for children. I think that children should not be allowed to make these life-changing decisions at such a young age. They are not mature enough; they should have parents who love them and advocate for them regardless.”

And sadly, the Bones hitmaker has since had to deal with online haters attacking her for calling out Brittany. Now, in an interview with GLAAD on Thursday, the 32-year-old country singer is defending getting “heated” with Brittany over her transphobic posts. She explained her comments to the makeup artist only came “from a good place,” saying:

“Honestly, I think the empathy bone you get when you become a parent just is amplified so much more, so I think that you’re even more sensitive to disinformation and bullying.”

Maren then noted that it is so important to “correct” the discourse that is “completely untrue about trans youth and gender-affirming care and what it actually entails.” She continued:

“I think that in correcting that, I definitely get heated because it’s not like we’re talking about what your favorite color is; we’re talking about people’s lives. And so, I do get extremely emotional when I talk about it or if I correct someone. It is really, really sensitive. … But I don’t think you can do this all the time with, like, sunshine and rainbows. I think you have to have the tough conversations so people, like, understand what’s actually going on and you could actually save someone’s life having the right information.”

So true. Furthermore, the songwriter said she just wants her fans to feel “safe” at her shows and know where she “stands” on LGBTQ+ issues at the end of the day. You can ch-ch-check out her entire interview with GLAAD (below):

Reactions, Perezcious readers? Let us know in the comments.