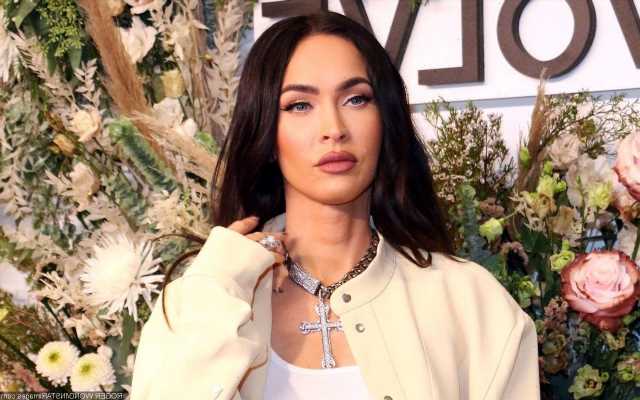 The ‘Jennifer’s Body’ actress draws mixed response after revealing on Instagram that she cut a hole in her sparkly blue outfit to have sex with her fiance Machine Gun Kelly while in Las Vegas.

AceShowbiz –Megan Fox and Machine Gun Kelly are clearly still madly in love with each other and they are down to get hot and heavy at any given time. The engaged couple recently attended the 2022 Billboard Music Awards and things turned racy during their time in Las Vegas.

The actress has revealed that she cut a hole in her blue jumpsuit, which she wore before the prize-giving event, to have sex with her fiance. The former “Transformers” star made the shocking revelation in her Instagram post while sharing photos of her looks in Sin City.

On early Monday, May 16, Megan shared a photo and videos of her rocking the sparkly blue jumpsuit. One of the clips featured her posing with MGK for what looks like a photoshoot.

On the fourth slide, meanwhile, Megan shared a screenshot of her conversation with her stylist about what happened when she donned the jumpsuit. “Was this blue outfit expensive because we just cut a hole in the crotch so we could have sex,” so she texted her stylist at 2:08 A.M. along with a shrugging emoji.

“I hate you,” the stylist jokingly replied, adding crying laughing emojis. The stylist added though, “I’ll fix it.” In the caption of the post, Megan wrote, “An introvert in Vegas for three days during eclipse season…just SO much crying in the shower.”

Finding it hilarious, one person reacted to Megan’s conversation with her stylist, “LMAOOOOO the sex text omfg.” Another admitted, “Literally crying !!” while another weighed in, “Lol this sounds like those high school girls who are in bad relationships but they try to act they aren’t by posting weird stuff like that.”

Some others, however, thought that it was unnecessary for Megan to share the information on social media. “Everything I know about this relationship has been completely against my will,” one follower responded.

Another agreed as saying, “The text message like really? Nobody cares or wants to see that.” A third critic added, “megan PLS WE GET IT. YALL F**K.” Someone else remarked, “girl we did not need to know what u and mgk did in that dress.”

Another called it “cringe” as writing, “S**t is so cringe at this point. We get it yall like to f**k constantly no need to advertise it at every opportunity lol.” Someone also blasted the mother of three, “For a woman with kids i dont think showing that text is appropriate.” One other person commented, “This relationship is awkward.”

For the BBMAs, Megan wore another outfit, which was a black dress with a high slit up the side paired with black and diamond opera gloves. MGK matched her look in a studded suit over a diamond-covered turtleneck.