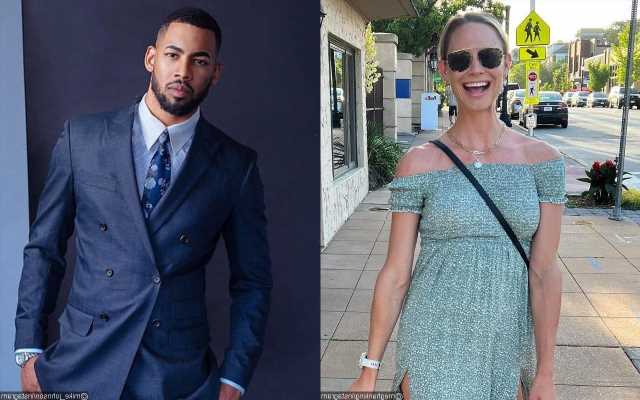 The former Bravo personality and ‘The Bachelorette’ alum cozy up to each other after attending a podcast party at the Green Valley Ranch Resort and Casino ahead of the 2022 iHeartRadio Music Festival.

AceShowbiz -It looks like Meghan King had a lot of fun with Mike Johnson during a recent outing. When hitting up a strip club together in Las Vegas, the former star of “The Real Housewives of Orange County” and “The Bachelorette” alum were spotted cuddling up to each other.

According to E! News, Meghan and Mike met up at a podcast party at the Green Valley Ranch Resort & Casino ahead of the 2022 iHeartRadio Music Festival. iHeartRadio producers reportedly set them up for her “Intimate Knowledge” podcast, but things escalated quickly with the two kissing during the night.

“Meghan arrived hand-in-hand to Crazy Horse 3 alongside Mike Thursday night,” a separate eyewitness told the outlet. “They snuck off to a table in VIP and were all over each other all night. Meghan was sitting on Mike’s lap the majority of the night. Mike was very touchy feely with her.”

The eyewitness claimed the twosome left together and “seemed very into each other.” However, a different informant divulged that the pair “are not dating” and they’re “just friends.”

While they might not be an item, a video obtained by TMZ showed Meghan and Mike getting handsy with one another. The 37-year-old reality star even sat on his lap before a dancer came to entertain them.

Following the outing, Meghan shared a photo with Mike on Instagram. “Look who I found at @iheartradio festival in Vegas! @mike_johnson is my new fave!” she captioned the post.

Back in July, it was reported that Meghan was dating businessman Trevor Colhoun following her split from Cuffe Biden Owens. She allegedly began romancing the CEO of Trusted Provider Network in April.

The former Bravo personality confirmed her separation from President Joe Biden’s nephew in December, just two months after they tied the knot in a private ceremony in October 2021. “I am rattled. This situation is profoundly devastating,” she said at that time. “This is obviously not what I imagined when I made my vows – and I’m shocked and saddened by the way things turned out.”