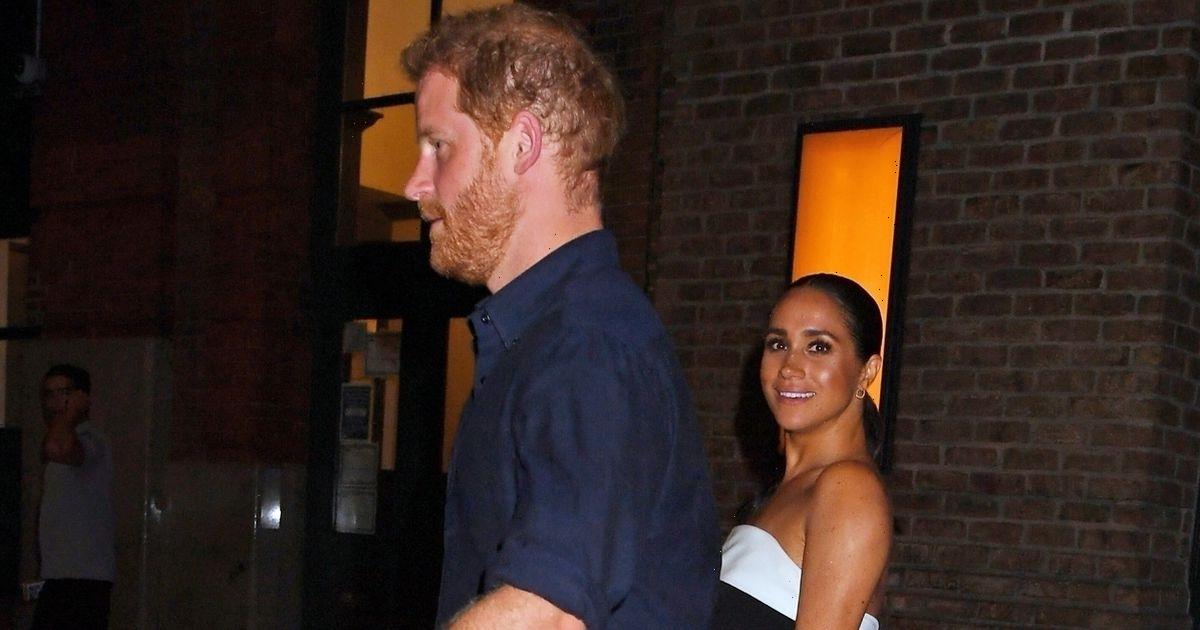 Prince Harry and Meghan Markle looked loved-up as the left a trendy restaurant where they had been eating with friends during their trip to New York.

The couple spent the evening at Chef Andrew Carmellini's Tribeca hotspot, Locanda Verde, with pals just hours after Harry gave a keynote speech at the UN.

The pair looked very much in love as they smiled and held hands as they left the restaurant, following a busy day that saw Harry speak at a United Nations event honouring Nelson Mandela.

Harry, 37, opted for a casual look in black denim jeans, a navy blue shirt and grey trainers. He also accessorised his look with two bracelets and a necklace.

Wife Meghan, 40, chose a more glamorous look, wearing a black and white jumpsuit, black stilettos and a red clutch bag as she showcased her third outfit of the day.

Meghan's outfit, a black jumpsuit with white detailing around the neckline, is by designer Gabriela Hearst and retails for almost £4000.

However, any royal fans feeling like they've seen it before would be correct, as it's very similar to an outfit worn by Kate Middleton just a few weeks ago.

Kate, 40, wore a long fitted ballgown with a similar white silk stripe across the neckline to the premiere of Top Gun: Maverick on May 19 this year, where she was photographed with the film's main star Tom Cruise.

The Duchess of Cambridge's dress is by designer Roland Mouret and sells for a slightly lower price of £2700.

Harry and Meghan's date night comes after the prince heartwarmingly paid tribute to his wife by calling her his “soulmate” during a highly anticipated speech at the UN.

The couple attended the organisation’s New York headquarters on Monday as part of a wider celebration of Nelson Mandela International Day.

They were invited along to an event held by the General Assembly to mark the special day, with Harry even giving a keynote speech to a number of keen listeners.

The Duke of Sussex was just one of several speakers, which also included the Deputy Secretary-General and the President of the General Assembly – however it was his touching reference to his wife that many fans felt stole the show.

Dressed in an immaculate blue shirt and tie, Harry spoke passionately about climate change and his desire to tackle ongoing poverty.

The prince also made a number of references to Nelson Mandela’s ongoing legacy, including the challenges faces by the anti-apartheid activist during his lifetime.

This included highlighting a disparity between the rich and poor, tackling ongoing food inequality and pledging to continue to stand against racism.

During a portion of his speech where the prince spoke about his many visits to Africa throughout his life, Harry paid tribute to both his mother and his wife, as he described Meghan as his “soulmate.”

He said: "Since I first visited Africa at 13 years old, I've always found hope on the continent.

"In fact, for most of my life, it has been my lifeline, a place where I have found peace and healing time and time again.”

He then added: “It’s where I've felt closest to my mother and sought solace after she died, and where I knew I had found a soulmate in my wife. And it's why so much of my work is based there.”

In honour of the day, Harry also shared a fond and poignant memory of a photograph in which Diana had been stood beside Nelson Mandela, explaining how that image had been a great source of comfort to him in his grief.

"On my wall, and in my heart every day, is an image of my mother and Mandela meeting in Cape Town in 1997," said the Duke.

”The photo was presented to me by the late Archbishop Desmond Tutu, whose friendship and inspiration were their own treasured gift. My wife and I had the honour of introducing our four month old son to him back in 2019.

"When I first looked at the photo, straight away what jumped out was the joy on my mother's face. The playfulness, cheekiness, even. Pure delight to be in communion with another soul so committed to serving humanity."