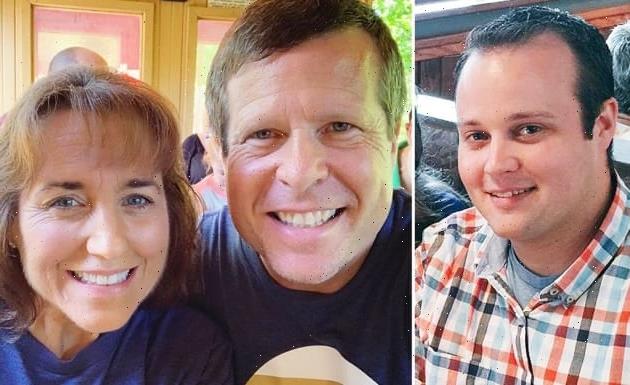 Jim Bob and Michelle Duggar have released their first statement in the wake of their eldest son, Josh, being found guilty in his child sexual abuse material trial.

The verdict came down on Thursday after a jury deliberated for about 24 hours.

Jim Bob Duggar was in attendance for the proceedings and reportedly hugged Anna Duggar shortly after the guilty verdict was read out loud.

He then exited the courtroom alongside younger son Justin and daughter-in-law Claire.

“This entire ordeal has been very grievous.

“Today, God’s grace, through the love and prayers of so many, have sustained us.

“Our hearts and prayers are with anyone who has ever been harmed through CSAM [Child Sexual Abuse Material],” the polarizing couple wrote on their official website late yesterday.

“In the days ahead, we will do all we can to surround our daughter-in-law Anna and their children with love and support..

“As parents, we will never stop praying for Joshua, and loving him, as we do all of our children.

“In each of life’s circumstances, we place our trust in God. He is our source of strength and refuge.

“Thank you for your prayers.”

As part of Josh’s trial, a long-time family friend named Bobye Holt testified that Josh confessed as a teenager to molesting multiple little girls, including his own sisters.

She then took to Facebook and wrote that Duggar was nearly arrested for these misdeeds — but Jim Bob and Michelle swooped in to influence local authorities and manipulate the situation.

They helped Josh avoid an arrest for pedophilia at the time.

Years later, he has now been convicted of pedophilia for downloading graphic material of minors being tortured and assaulted.

Josh was arrested in April and pleaded not guilty to the charges of receiving and possessing child sexual abuse material.

In a statement immediately after their son was charged, Jim Bob and Michelle Duggar said:

“The accusations brought against Joshua today are very serious.

“It is our prayer that the truth, no matter what it is, will come to light, and that this will all be resolved in a timely manner.

“We love Josh and [his wife] Anna and continue to pray for their family.”

Elsewhere: Jill Duggar and her husband, Derick, have also spoken out on Josh’s conviction.

“Today was difficult for our family,” the couple stated on theirr blog Thursday.

“Our hearts go out to the victims of child abuse or any kind of exploitation.

“We are thankful for the hard work of law enforcement, including investigators, forensic analysts, prosecutors and all others involved who save kids and hold accountable those responsible for their abuse.”

Continued Jill, who is no longer close to her famous relatives:

“Nobody is above the law. It applies equally to everybody, no matter your wealth, status, associations, gender, race, or any other factor.

“Today, the people of the Western District of Arkansas made that clear in their verdict.

Jill and Derick went on to invoke a verse from Luke’s chapter of the Bible, in which disciples were warned:

“Whatever you have said in the dark shall be heard in the light, and what you have whispered in private rooms shall be proclaimed on the housetops.”

Dillard was in attendance for most of the trial because he said he wanted to see the evidence laid out against Josh first-hand.

“We have been lied to so much that we wanted to hear the evidence for ourselves in court,” he and Jill added via their statement.

“After seeing all the evidence as it was presented, we believe that the jury reached a just verdict today, consistent with the truth beyond a reasonable doubt.”

Jill, meanwhile, has distanced herself from her 18 siblings and her parents in recent years — but she shared words of support for her sister-in-law on Thursday.

“Josh’s actions have rippled far beyond the epicenter of the offense itself. Children have scars, but his family is also suffering the fallout of his actions,” her blog post concluded.

“Our hearts are sensitive to the pains Josh’s wife, Anna, and their seven children have already endured and will continue to process in the future.

“This trial has felt more like a funeral than anything else. Josh’s family has a long road ahead.

“We stand with them, we are praying for them and we will seek to support them however we can during this dark time.”

Josh Duggar, who was handcuffed and taken into custody after learning his fate in court, will be sentenced in about four months.

He faces up to 40 years in prison.

“We appreciate the jury’s lengthy deliberations,” said his attorney yesterday.

“We respect the jury’s verdict, and we intend to appeal.”