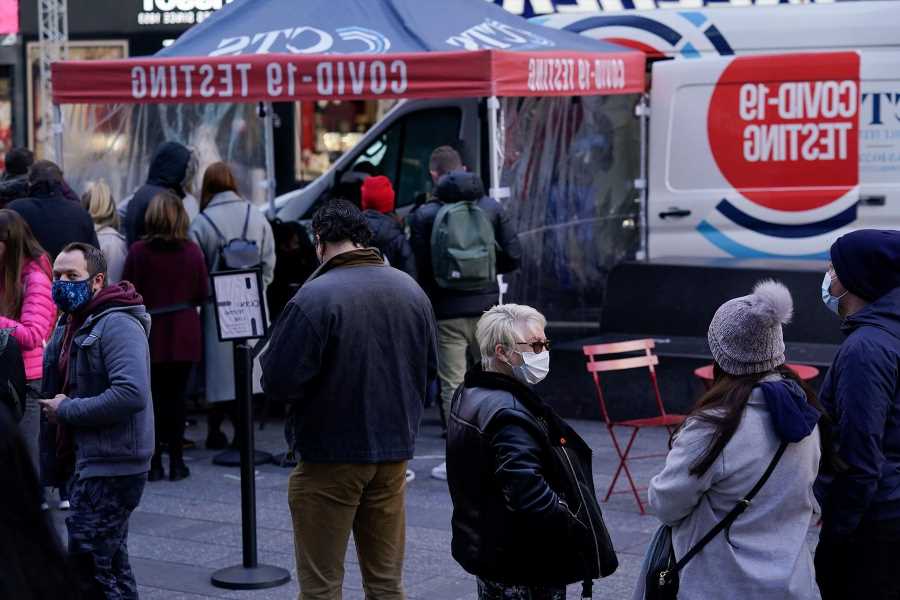 With lines for Covid-19 testing snaking down the sidewalks, and messages announcing closures posted on the shuttered doors and Instagram accounts of local businesses, New York City residents have been witnessing scenes this week that they hoped they’d never see again. That’s because Covid-19 has once again been making its way across the city, to the tune of nearly 4,000 new cases each day: the highest those figures have been since last April, before vaccines were widely available.

While the Delta variant of SARS-CoV-2 continues to spread throughout some regions of the United States, leaving hospitals filled to capacity and healthcare workers stretched too thin, the more recent Omicron variant is the one tightening its grip on New York City. After everything that has happened in the nearly two years since Covid was introduced to our lives, seeing these all-too-familiar scenes — whether in person, or watching from other parts of the country — is alarming.

N95 Masks vs. KN95 Masks: Which Ones Work Best to Protect You Against Covid?

Andrew Cuomo Ordered to Give Back the $5.1 Million He Made Off a Covid-19 Book He Didn't Write

Black Sabbath on the Making of 'Vol. 4': 'It Was Absolute Pandemonium'

It also raises a lot of questions: like how this is possible in such a highly vaccinated population, and what it tells us about the effectiveness of the existing Covid vaccines and boosters. Here’s what’s going on in New York City, and what it means for the rest of the country.

The percentage of people in New York City testing positive for Covid-19 has doubled over three days this week, according to a tweet from Jay Varma, MD, a physician, epidemiologist, and New York City Mayor Bill De Blasio’s senior public health advisor — adding that “we’ve never seen this before in #NYC.”

Although it will take a while to get the definitive numbers, at a press briefing on Dec. 16, New York City Health Commissioner Dave Chokshi, MD, said 13 percent of the city’s cases at the beginning of this week were caused by Omicron.

“It’s an urgent situation, because what we know so far is imperfect about Omicron, but it sure is clear that it spreads fast,” New York City Mayor Bill de Blasio said at the same event, where he announced a series of measures to attempt to get a hold on the rapid spread. In addition to opening more testing sites and adding mobile clinics, starting on Monday, Dec. 20, the city will also distribute 500,000 at-home rapid tests and 1.5 million KN-95 medical grade face masks through community organizations.

At this point, 78.8 percent of New York City residents (across all age groups) have received at least one dose of a Covid-19 vaccine, and it’s not unusual to see New Yorkers wearing face masks, even when they haven’t been mandated. A range of public health mitigation strategies exist, and are widely available, including testing. How did Omicron manage to get past all that?

“Before Omicron, I think many thought that current vaccines — including boosters — would mitigate spread,” says Howard P. Forman, MD, professor of radiology and public health, and director of the health care management program at the Yale School of Public Health. “Omicron has made that impossible. And it will not be the last variant.”

From what has been seen in the United States so far, the Omicron variant is behaving largely as expected: more transmissible than previous strains, but resulting in less severe illness. This is in line with the findings of one of the first real-world studies on Omicron, conducted in South Africa and published on Dec. 14, but even with that data, it’s too soon to know how this variant will play out as it makes its way through the U.S.

It’s also too early to know for sure how Omicron is able to spread so rapidly, but preliminary data from a preprint study indicate that it may be because its many mutations make it easier for the variant to enter and take hold of a person’s respiratory tract. That’s because once it reaches the tissue, it multiplies about 70 times faster than the Delta variant, the researchers at the University of Hong Kong found. (But it’s important to note that their experiments were done on tissue in a lab, and not under real-life conditions.)

What does this have to do with the spike in cases in New York City, where so many people are at least partially vaccinated? According to Forman, it comes down to the fact that the current Covid-19 vaccines — particularly with a booster — remain highly effective against severe disease and death. “But, they are not nearly as effective against transmission,” he explains. “This, combined with seasonal changes in climate and behaviors are affecting all regions [of the country].”

So what does this all mean? In short, there’s a good chance they’re next. “The spread seems pre-ordained to all areas of the country,” Forman says. “We have only modest means to control this right now, but hospitalizations, severe disease, and deaths can and should be prevented with either immediate primary vaccination or booster shots if you are due.”

At this stage, it looks highly unlikely that SARS-CoV-2 will ever be fully eradicated, but instead, become endemic. This would mean that the virus would still exist and circulate, but, thanks to sufficient and lasting levels of immunity from vaccines and natural infection, Covid-19 would be more like influenza is now: serious for high-risk populations, but manageable (if unpleasant) for everyone else. There is not a specific timeline or path the novel coronavirus will take to becoming endemic, as it will depend on multiple factors, including how the virus will continue to mutate, and how long it takes to get more of the world vaccinated.

So, is the outbreak in New York City (and soon-to-be elsewhere) a sign that Covid is becoming endemic? In Forman’s view, we’re not there yet. “Omicron is likely just another serious variant — there will be more,” Forman explains. The good news is that researchers are starting to experiment with vaccines that would be more effective against respiratory spread of the novel coronavirus. “Hope should not be lost that we will get more effective vaccines that stop transmission,” Forman notes. “And we have therapeutics coming along — particularly Pfizer’s Paxlovid — that could transform this into something much more manageable.”

Until then, the existing Covid-19 vaccines and their booster doses are the key to moving forward. “I do not believe we will have this truly under control until we have much larger percentages of the world population vaccinated, effectively,” Forman says. “I still think we have a long way to go before we can declare victory; and hundreds of thousands of more deaths in the United States.”