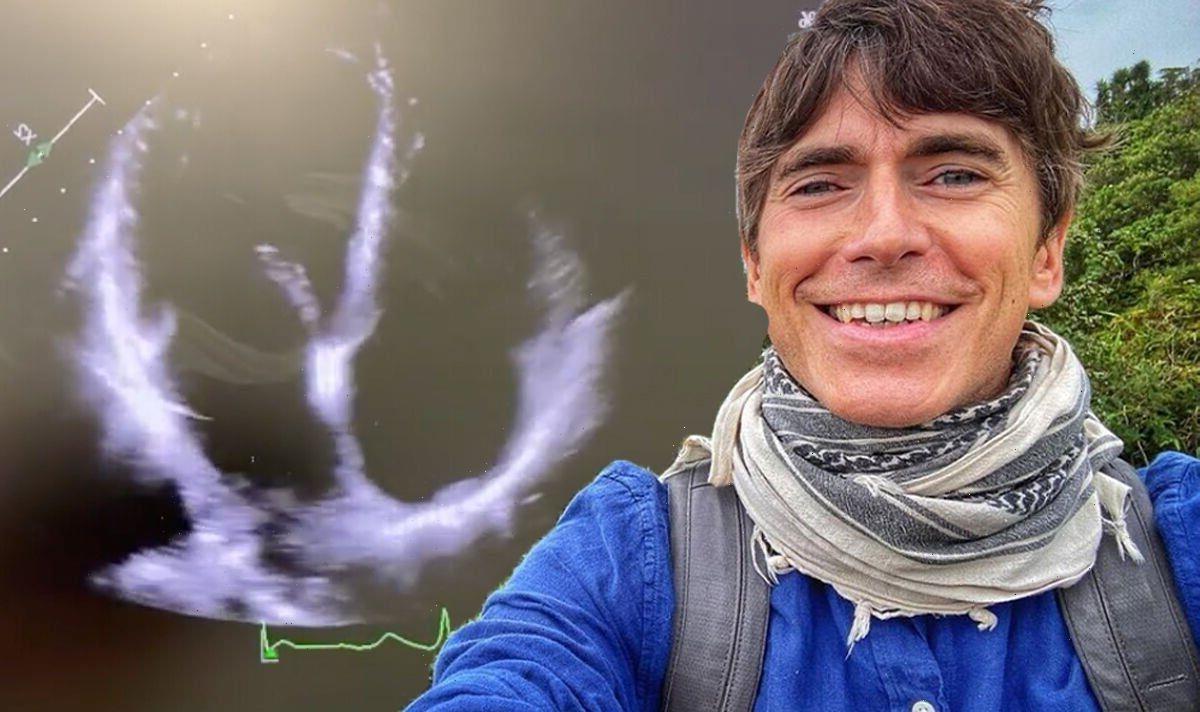 Simon Reeve, 49, took to his social media accounts to post a scan of his heart “beating and flapping away” after he was tested for “vegetation growth” after contracting the illness. He seemed delighted as he announced the “all clear result”.

He wrote: “My heart(!). Beating and flapping away.

“Final check for any ‘vegetation growth’ (not a good thing) after exotic illness… all clear was a phew moment. Thanks again to @rdehospitals.”

wortschatz75 typed: “Oh wow, what a thing to see. Glad for your all clear! X.”

coolcat1304 commented: “All I can see is a stick man clapping in the middle! Glad you are ok.”

Tilly9509 remarked: “Well you don’t do these things by half’s, do you?! Keeping yourself and your loved ones on their toes. Glad you don’t have any ferns or mosses or palm trees growing in there! Stay well !!”

ritarosemccarthy typed: “Wonderful film but so sorry for your problems hope you improve and get better soon.”

kavwire joked: “I thought you were pregnant at first …great news.”

It is believed that the adventurer and documentary filmmaker picked up the exotic illness during one of his work trips, but he has not yet specified what the illness is.

Last year, Simon revealed how he had managed to defy the odds after fertility doctors told him and his wife Anya that they had little to no chance of ever having children.

The TV presenter and adventurer knew that he had always wanted to be a father, and thought of the role as his life’s purpose.

When he met and first started dating his wife, they were both in their early thirties, and Simon knew that if they were going to have children, it needed to be soon.

However, once they started trying, he soon realised that conceiving a child was going to be a much harder task than he initially expected.

After months of trying to conceive a baby naturally, Simon and Anya knew that something wasn’t quite right.

Simon was left horrified when an expert told him that he was “basically infertile”.

Recalling the moment his world crumbled before him, Simon told his wife that if he couldn’t have children, he was “likely to go mad”.

“I would not be able to have children. It was the starkest of messages: I could hardly take it in,” Simon wrote.

“She told me I had loads of sperm but their morphology was terrible. We’d never heard the term before.

“‘Your sperm are deformed,’ said the expert. ‘They will never be able to break into Anya’s eggs.’”

Simon went on to explain that he had zero per cent normal sperm and the fertility experts had also checked his sperm motility.

“My sperm were swimming around in circles or moving energetically without going anywhere. Ironically enough, considering my day job, they were not good travellers,” he explained on Instagram.

Even with the stark diagnosis, Simon’s wife Anya wasn’t ready to give up just yet.

Anya insisted that her husband led a rather unhealthy lifestyle, and insisted that if he were to make some much-needed changes, then maybe they would have a chance at conceiving a child.

And she was right. The presenter underwent a lifestyle overhaul, and they now have 10-year-old son Jake.