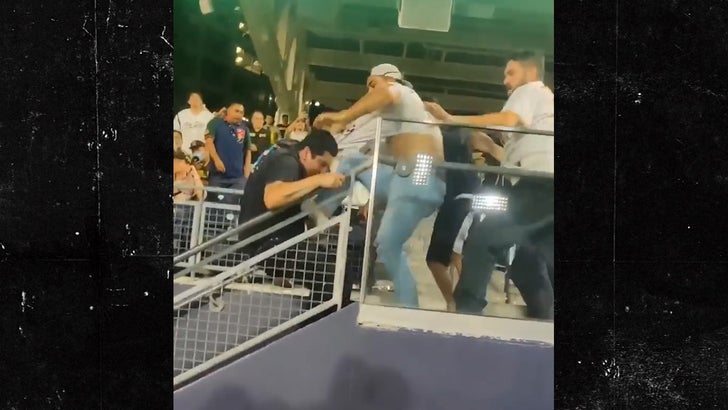 The Padres didn’t show much fight on the field on Monday night, but their fans in the stands certainly did … as several men got involved in a wild fracas out in right field.

The melee happened at some point during San Diego’s lifeless 1-0 loss to the Giants at Petco Park — when four people got into a tiff.

It’s unclear what started the altercation, but video shows it got violent in a hurry … when one fan in a Padres jersey attempted to Sparta-kick a man down a row of stairs.

The guy, though, somehow ended up staying on his feet — and then he dragged the Padres supporter down the stairs himself.

Eventually, two other guys jumped into the fray and began throwing punches.

The men traded blows for a few seconds — before a bevy of security guards raced into the action to break it up.

A spokesperson for the San Diego Police Dept. tells TMZ Sports … “security handled and two subjects were ejected. We were not made aware of fight until it was concluded.”