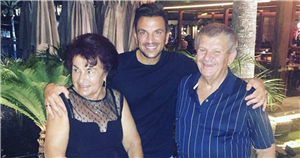 Peter Andre has paid tribute to his parents on their 66th wedding anniversary, posting a photo of the couple on his Instagram.

The singer has been unable to see his parents throughout the lockdown due to Australia's strict travel ban and expressed his sadness at not being able to celebrate face to face.

He posted the caption: "HAPPY 66th wedding anniversary mum and dad. The love we have for you is incredible. Beyond words. Im so sad i can’t see you face to face yet but I pray the borders will open soon. Thank you for inspiring me in every possible way.

"Bringing me and my brothers and sister up in a way that I hope has made you proud. I hope we’ve listened ( im sure I’ve messed up a few times, and for that I apologise); but I have and will always try to think of you both and your lessons as I bring my children up in this changing world. "

He finished: "Thanks for being so amazing to us all and hope you both have a lovely day. Like you always say dad, ‘it’s only the first 100 years that are tough’. Love and all the respect in the world. Love from your son."

Peter was flooded by messages of congratulations from his celeb friends, including Kerry Katona who wrote: "Oh I love your mum and dad… they’ve always been so lovely to me…. Happy anniversary."

Princess has previously told her fans during an Instagram Q&A that she'd "100%" go on the dating show, but Pete was quick to chime in and say "she won’t be going on Love Island. Not tomorrow or next year or…ever."

The protective dad updated readers in his weekly new magazine column, saying: "Princess has said she wants to do it but I still haven’t changed my mind about that. Presenting it? Yes. A contestant? Not so sure!"

He also discussed Junior's new record deal and how he feels about sending the kids back to school.

He revealed: "As you may have seen, Junior has signed a deal with Columbia Records and I couldn’t be prouder!

"I won’t say too much – I want him to tell people – but suffice to say, from when I took him into Rebel Records six months ago and got him in the booth, his dedication has been unbelievable."

"I signed my first record deal at 16, so my dream was to get him signed at the same time, and we did it!

"I have plans for Princess musically as well, but she’s too young at the moment. And besides, I thought she agreed she’ll be a nun. Oh, maybe it was just a dream I had – LOL!"

For the latest news and updates on Peter Andre, sign up to our daily OK! newsletter.