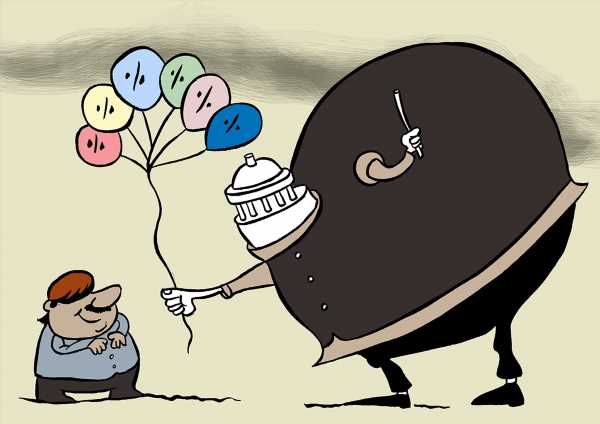 ‘Comparing the rates of interest with PSU banks, the three- and five-year time deposit rates of the post office are more favourable.’

The government has raised the interest rates on some small savings schemes For the second quarter in a row.

The Reserve Bank of India has raised the repo rate by 225 bps since May 2022, with the objective of containing inflation.

Says Manavi Prabhu, head-fixed income, Anand Rathi Share & Stockbrokers: “The rates for small saving schemes are supposed to be market-linked, based on a predefined formula. According to the last monetary policy report released in September, these rates were 44-77 bps below the formula-based rates, hence an increase is only justified.”

The maximum increase in rate was seen in one, two and three-year fixed deposits.

Given the 225 bps rate hike in the repo, the maximum hike was expected in shorter-duration instruments.

Deepesh Raghaw, founder PersonalFinancialPlan, a Sebi-registered investment advisor, says, “It (the rate hike) is in line with what is happening in the economy right now. Government bonds are giving 7.3 per cent.”

So the question is, which instruments have become the most attractive after this rate hike?

The rates are typically around 7 per cent, except in the Senior Citizen’s Savings Scheme (SCSS), where the rate is 8 per cent.

Sanjeev Govila, a Sebi-registered investment advisor and CEO of Hum Fauji Initiatives, a financial planning firm, says, “All the rates are fairly good now. With inflation trending below six per cent currently, and expectations of it not going too high in the near future, there would be a net positive rate of return to retail investors (ROI less the inflation rate) from these small savings instruments, before tax.”

So, has SCSS become very attractive? Govila believes it has, as it is now offering 8 per cent, and is particularly beneficial for those in the nil or lower income tax brackets.

The Public Provident Fund (PPF) rate has not changed and stands at 7.1 per cent.

So do these instruments become less attractive?

Since PPF and SSY rates are linked to long-term yields — the Gsec — they do not need to mirror repo rate hikes that drive the shorter end.

The fact that the PPF rate has not been raised does make it less attractive.

However, the tax benefits on the interest, capital investment and redemption proceeds still make it a relevant investment.

The interest income earned on an investment made in a minor’s name (beyond a very minimal restriction), is taxed in the hands of the parent with the higher income.

Says Vishal Dhawan, founder and CEO, Plan Ahead Wealth Advisors: “The 7.6 per cent return on SSY is actually very attractive compared to other instruments available, as it is tax-free. So not raising rates does not reduce its effectiveness.” How do the post office fixed deposit rates compare with bank rates? They are more or less the same, with a variation of 0.1 per cent to -0.3 per cent.

Says Prabhu of Anand Rathi: “However, bank FDs have flexible tenures from 7 days to 10 years, whereas post office FDs have fixed tenures of one, two, three, and five years only. Post office FDs can be pre-closed only after they complete six months, whereas bank FDs offer higher liquidity.”

The interest is only paid out annually on a post office FD, while banks offer multiple payout options.

Govila says, “Comparing the rates of interest with PSU banks, the three- and five-year time deposit rates of the post office are more favourable. However, private banks offer much better rates across all time periods.”

How do small savings instruments compare with debt funds now?

Small savings are also an attractive option for investors in lower tax brackets, though debt mutual funds currently offer yields to maturity that are marginally higher than small savings, especially in certain categories.

Dhawan says, “However, for those who are in a higher tax bracket, the fact that the indexation benefit is available on debt mutual funds if you hold long term, and you don’t have to pay any tax until you actually sell the instrument makes it more attractive for those in the higher tax brackets. The tax bracket of the investor is a very important consideration when he or she is deciding on whether to use one instrument over another.”

Debt mutual funds could also be much easier to deal with from an operational and servicing perspective, similar to bank deposits.

Many things are available electronically and therefore easier to manage.