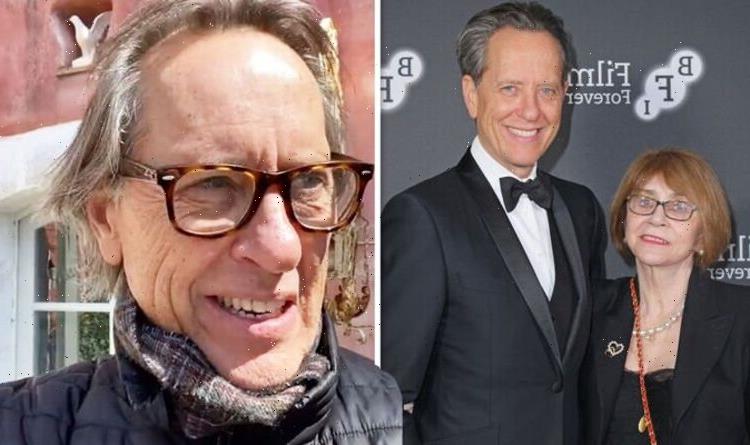 British actor Richard E.Grant announced the death of his wife Joan Washington in September, who died just eight months after being diagnosed with stage four lung cancer. The Star Wars actor said he was feeling “emotional” as he visited the couple’s home in the South of France.

The 64-year-old took to Twitter and shared a candid video in view of his 288,500 followers.

The film star explained that he and his late wife had purchased a home in the South of France three decades ago.

He has since returned to their home months after her death as he sorted through her belongings.

In the candid clip, he said: “33 years ago my wife and I bought a little house here in the South of France when my daughter was just six-weeks-old.

“And it’s obviously very emotional being here having to sort through her clothes and deal with other things.

“But gloriously life-enhancing to be back. We swam, danced, played badminton, had parties, surrounded by flea markets.”

He concluded: “The sun is shining and it’s utterly freezing.”

Richard captioned the post: “Something for the weekend. In spite of the Arctic wind!”

He added a series of freezing face emojis following his candid admission.

Twitter user, Marie Redd remarked: “It is always emotional going back to places that meant so much to you all and even harder when it was your home as well.  You can only take one day at a time.”

Julie Miller commented: “This is when you really realise the important things in life are the people you love and all the good times you have together – they’re what  gets you through the not so good times.”

“Ah, Richard your daily pocketful of joy comment, bestowed onto you by your beautiful wife has stayed with me. Looks like you have found it today,” Shelley offered.

As Carrie added: “You are a true gentleman, even in your heartache you ooze gratitude and count your blessings, you are an inspiration, Richard. Your positivity is infectious.”

On September 3 he revealed his wife’s death, sharing a video of the pair dancing together to the song Only You.

They married in 1986 and share a daughter, Olivia, and a stepson, Tom, from Joan’s previous relationship.

He said: “Since her stage four lung cancer diagnosis two days before Christmas, she was accepting, clear sighted, sanguine and totally without self-pity.”

He praised the oncology team at the Royal Marsden Hospital, NHS nurses, Price’s Mill Surgery and Longfield palliative carers from their “beyond exemplary” work.

He continued: “It’s been my privilege to be by your side, sharing our last eight months together, enabling us to say everything we possibly wanted and needed to, so that when you asked Olivia and me two weeks ago ‘to let me go’, we unequivocally said ‘yes’.”

The couple met when Joan agreed to give Richard private voice lessons in 1982.