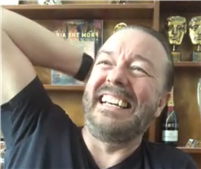 Leave it to comedian Ricky Gervais to have the last laugh in the generally unfunny Will Smith saga.

While the reaction to the Academy of Motion Pictures 10-year ban on Smith was mixed, with some calling it light and supporters deeming it appropriate, Gervais had the definitive take.

Following the Friday announcement of the penalty, he took to Twitter with his own comment on the move: “Hopefully, he’ll only do 6 years with good behaviour.”

Earlier, Gervais said that Chris Rock’s joke about Jada Pinkett Smith’s hair was “like the tamest joke I would’ve ever told.”

When people asked the frequent Globes host what would have happened to him in the same circumstances he replied, “Nothing.”

As for Pinkett Smith’s hair — she suffers from alopecia, which occurs when the immune system attacks hair follicles, causing uneven hair loss — and Rock’s joke, Gervais said, “Someone said it was joking about her disability.”

“Well I’m going a bit thin, I’m disabled,” he said while pointing to his hair in the video chat. “I can park right up next to Tesco’s now [in disabled parking]. I’m fat. That’s a disease. I’m fat and balding.”

Tom Tapp contributed to this report.