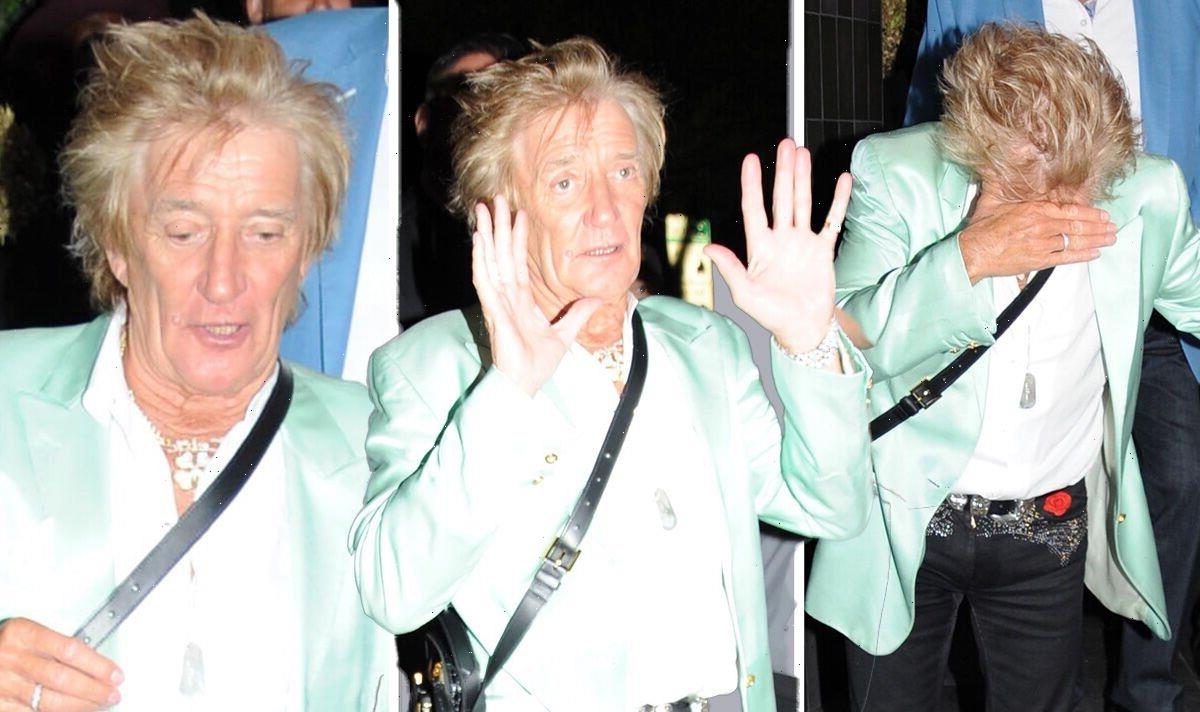 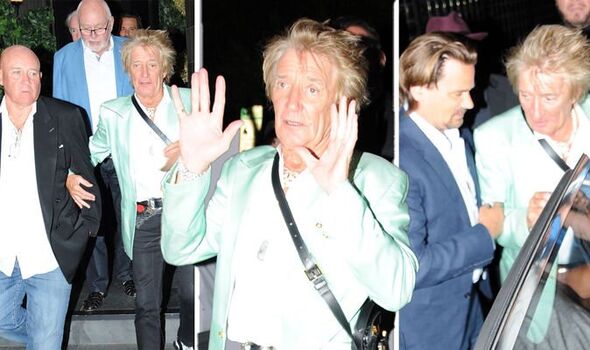 Rod Stewart has spent some quality time with his son Sean at a restaurant in LA. The pair were pictured multiple times as they exited the steak restaurant, both of the men looking smart in suit jackets and shirts. Rod went for a more glam rock look as he accessorised a mint green blazer with a large buckled shirt and sparkly designer shoes.

The British rock and pop singer donned a lavish mint green blazer while he tried his best to block camera flashes and hold back adoring fans as he left the steak restaurant with his son Sean Stewart.

Sir Rod Stewart caught the eye of fans in his satin green blazer, which was paired with tight black jeans, a large buckled belt and glittery designer shoes, displaying the words Dolce on one foot and Gabbana on the other.

Rod’s son Sean, who is also a singer/songwriter, helped to protect his father from the huge crowd, while wearing a navy suit with a crisp white shirt underneath.

The pair looked stunned as they navigated their way to the car, trying to avoid getting dazed by all the flashing cameras and screaming fans, with Sir Rod clutching onto his pal’s arm for support.

At one stage, Rod posed with a fan who held up a mobile phone in front of him. After signing a few autographs, Sean helped his father into the car and the pair drove off, with the former sitting in the front passenger seat and Rod in the back. 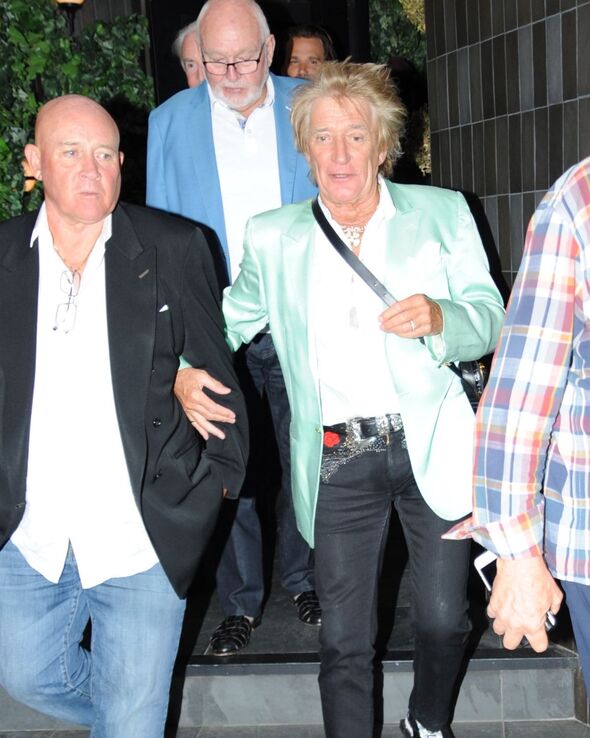 Due to the amount of flashing cameras and screaming fans, 77-year-old Rod was helped out of the restaurant and guided towards his car by a security guard. The stern-faced guard held out one of his arms which Rod grabbed onto for support, while the other was placed on his bag strap which went across his chest. 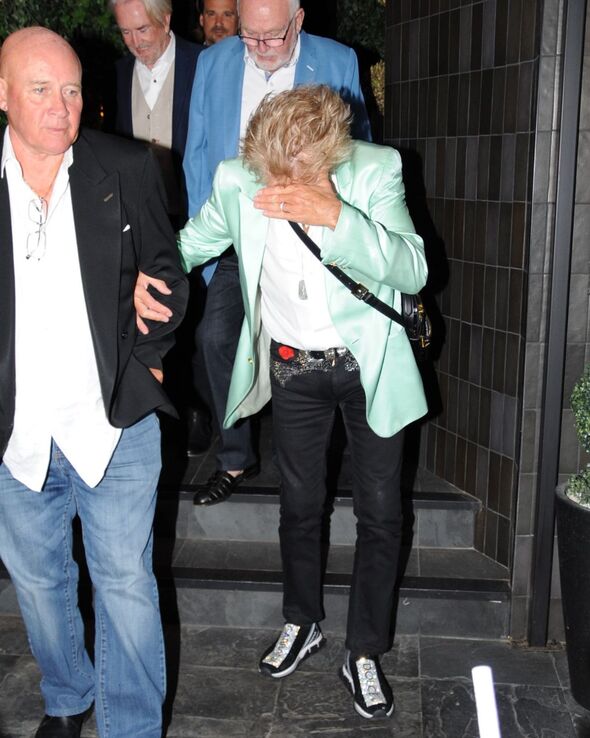 Rod shielding his face from cameras

Trying to navigate the stairs as he headed towards the car, which was waiting to pick him up, Rod put his hand up to cover his face. The glaring light from the hordes of paparazzi understandably proved too bright for the Do Ya Think I’m Sexy singer to handle. 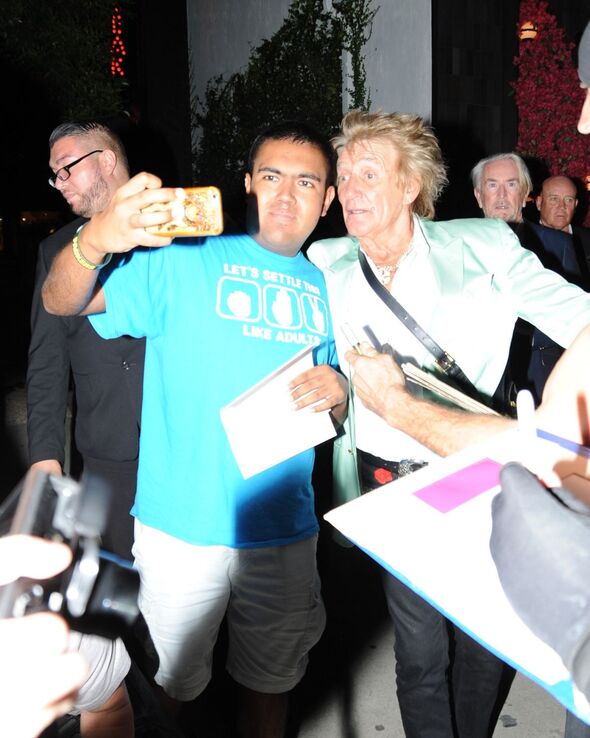 A wide-eyed Rod posed for a picture with lucky fan

Amid the chaos, one fan managed to get close enough to the singer to grab a selfie. Holding up his phone to take the picture, Rod leans in, his wide-eyed gaze and confused look making for a memorable shot. 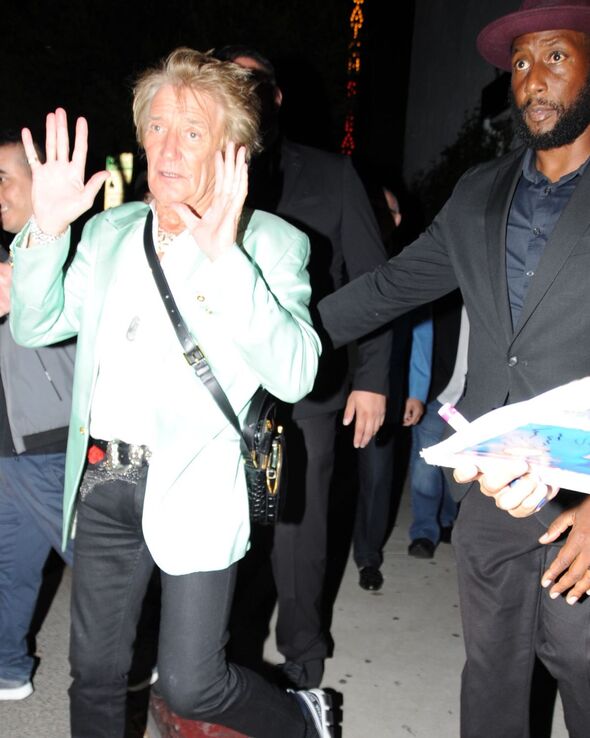 Rod holds up both hands as fans demand his attention

Looking overwhelmed by the attention he is drawing, Rod held up both of his hands, in a bid to say ‘that’s enough’. Guided by numerous security guards, one of whom put his hand on Rod’s back as they tried to get to the car undisturbed by fans. 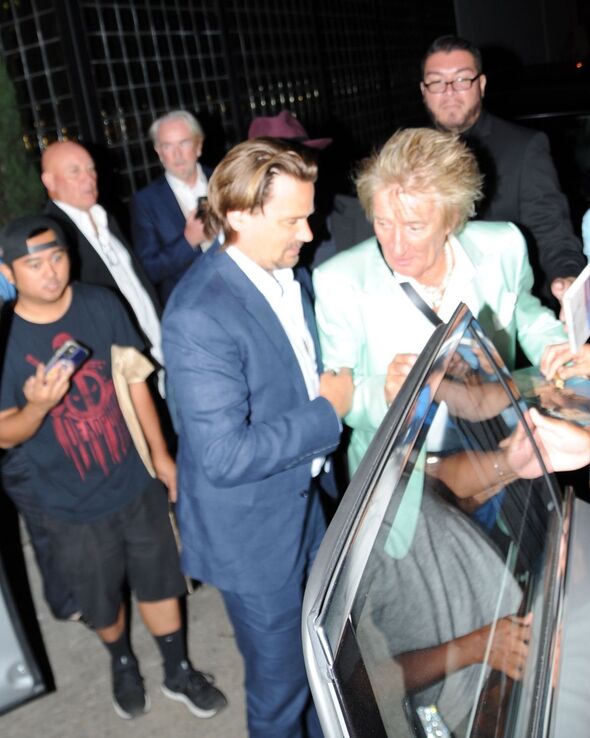 Sean ushers his father into the car

As they reach the car, Sean stays close to his father, gently guiding him to the back door of the vehicle. Even when trying to get into the car, relentless fans hold out pieces of paper and Rod Stewart merchandise, desperate for a signature from the man himself. 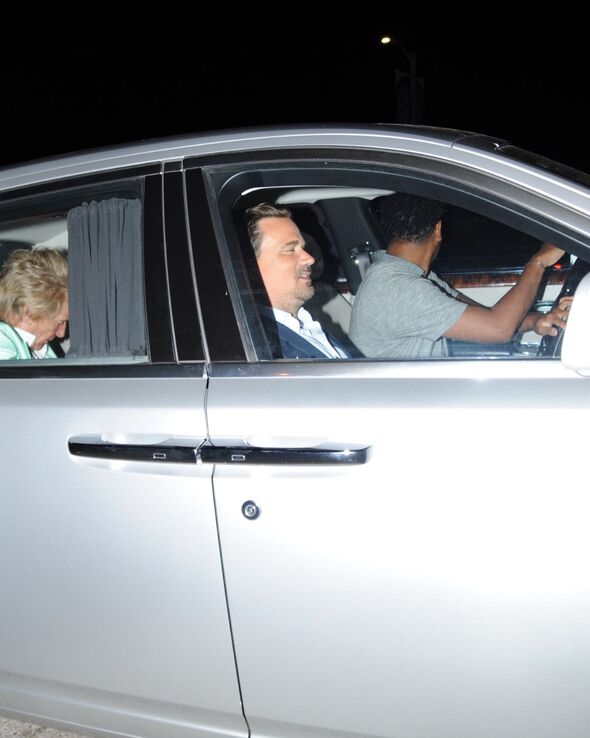 Safely in the car, Sean seems to flash a fleeting smile in the front seat of the car before he and his father are driven away from the hectic scene outside of the restaurant. Rod keeps his face down away from the cameras, his mint green jacket still visible through the car window.