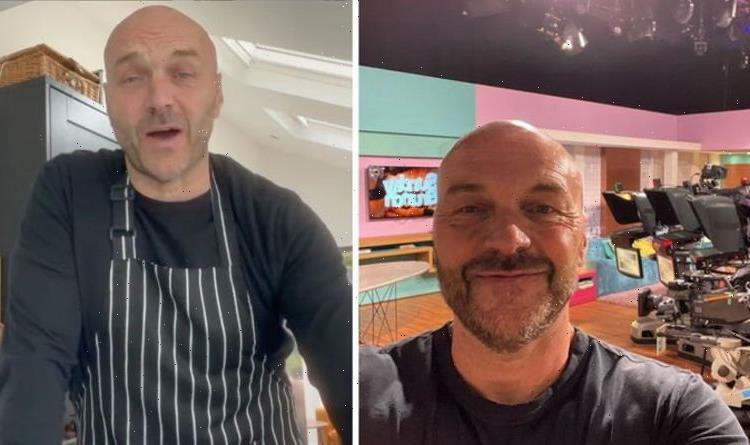 Simon Rimmer took to social media last night to explain the reason why he did not appear on this weekend’s Sunday Brunch. The 58-year-old presenter was replaced by TV and radio personality Miquita Oliver yesterday without an explanation from his co-star of nine years, Tim Lovejoy.

Channel 4 viewers took to social media to share their concerns for the TV star after Tim simply said he was “off”.

Simon has now admitted that he had a “hangover”, and was making the most of a week off from work after fans questioned his whereabouts online.

“Hi Simon, are you ok? You were not on Sunday brunch today. It felt like cornflakes without the milk,” one viewer wrote online.

“Wish I could tell you a dramatic story as to why I was off @SundayBrunchC4 today – I was just having a week off!” the presenter told his 270,300 followers.

“So I did what you lot normally do – enjoyed my hangover!

“See you next week,” he added, reassuring fans that he would be back for next week’s show.

“Oh thank goodness,” one follower remarked in the comments section of the post.

“We’re just a load of worryworts,” another added.

“You were missed, however @miquitaoliver did a great job! Can we have three presenters?” a third user asked.

“So pleased that you’ll be back next week. The show wasn’t the same without you,” a fourth person chipped in.

On Sunday’s show, Tim told viewers: “No Simon this week! He’s off.”

“He’s probably got a hangover, good morning Simon if you’re watching,” he quite rightly predicted.

Introducing his 37-year-old co-host, the presenter added: “My co-presenter this week is Miquita Oliver.”

“I’m really good, it’s really lovely to be here actually,” Miquita replied, before admitting that she hadn’t done much research ahead of her stint on the show.

Possibly revealing the cause of his hangover, Simon posted a picture online from the Pub in the Park festival, two days ago.

Michelin-starred chef Tom Kerridge could be seen in the background of his photo ahead of a cooking demonstration.

“About tonight @cheftomkerridge @pubinthepark,” the TV chef captioned his post.

The pair were in St Albans for the event and will head to Marlow for the next stop of their tour.