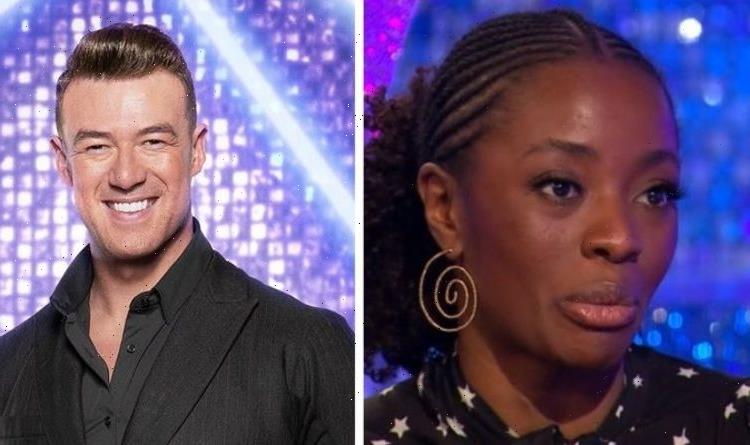 Kai Widdrington’s new partner will be former EastEnders star Maisie Smith, spelling a formal end to his Strictly Come Dancing partnership with AJ Odudu. However, her recent post on Twitter made it clear that there were no hard feelings, despite the fact that she is sadly unable to join her dance partner on the Strictly tour.

It turns out I can’t go straight from wearing a medical moonboot to performing in 37 shows in 3 inch heels. Who knew?

“I’m so happy @Kaiwidd doesn’t have to miss the Strictly tour because of me,” she wrote in view of her 54,300 followers.

She added: “Who better to pass on the Kai-shaped baton onto, than the amazing @maisie_smith_?

AJ has done an excellent job of masking her disappointment after gracefully bowing out of last year’s Strictly final, although, painfully for her, she had been tipped as a favourite to get her hands on the Glitterball trophy.

In the end, the show’s first ever deaf contestant, EastEnders’ Rose Ayling-Ellis, and her professional dance partner Giovanni Pernice, claimed the winners’ title instead.

Hours before this evening’s tweet celebrating Maisie as Kai’s new partner, AJ had announced that she had no choice but to pull out of the tour.

“Following medical advice, I’ve sadly had to pull out of the @strictlycomedancinglive due to injury,” she wrote.

“I had hoped for one last dance with @kaiwidd & we were so looking forward to showing you our (unseen) show dance, but it turns out I can’t go straight from wearing a medical moonboot to performing in 37 shows in 3 inch heels.

“Who knew?” she joked of the bittersweet news that she might already have been anticipating.

“The good news is, Kai and the rest of my Strictly fam will be setting the stage on fire.”

She added: “I can’t wait to go cheer them all on.”

However, not everyone was willing to accept Maisie as her replacement after noting the atmosphere and chemistry between AJ and Kai on the dance floor, which many Strictly tour-goers were excited to witness.

TeamKaiandAJ replied: “Aj I’m gutted I can’t see @Kaiwidd dance with anyone else but you.”

The account continued: “We all fell in love with you and Kai falling in love!”

Don_LB added hopefully: “I’m sure you’ll get to do your show dance later this year, either Xmas special or as part of opening show, eh @bbcstrictly?”

Followers hoped the tagging of the show’s Twitter account would add some pressure on the BBC to arrange an alternative date for the pair to showcase their unseen dance in the future.

1scrummymummy also responded with a supportive message, saying: “Recovery will bring you back even stronger! Here’s hoping @bbcstrictly know what an absolute GEM they found in the beautiful dancer you now are! You will slay in that ballroom again.”

Band_Of_Thieves added: “Your health is the main priority so get that ankle healed and we’ll hopefully see you dancing again soon because you’re too talented to leave it all behind!

“This doesn’t have to be the end.”

Lovedbyyou14 praised: “The baton is still firmly in your hands babe!!!”, while sholem_shadie reassured her: “The way you have reacted to this whole situ just shows your pure class.”