A Florida judge has officially dismissed divorce proceedings between Sylvester Stallone and his wife Jennifer Flavin as they salvaged their 25-year marriage.

The couple filed a voluntary notice for dismissal in Palm Beach County, Florida and are ‘together and very happy’, Page Six reports.

It comes as Stallone and Flavin were seen arm-in-arm in Manhattan on Friday as both had their gold wedding bands back on.

The action hero, 76, looked fit in a pair of jeans and a navy blue T-shirt, with a navy sweater tied over his shoulders as his spouse tried to give him a kiss. 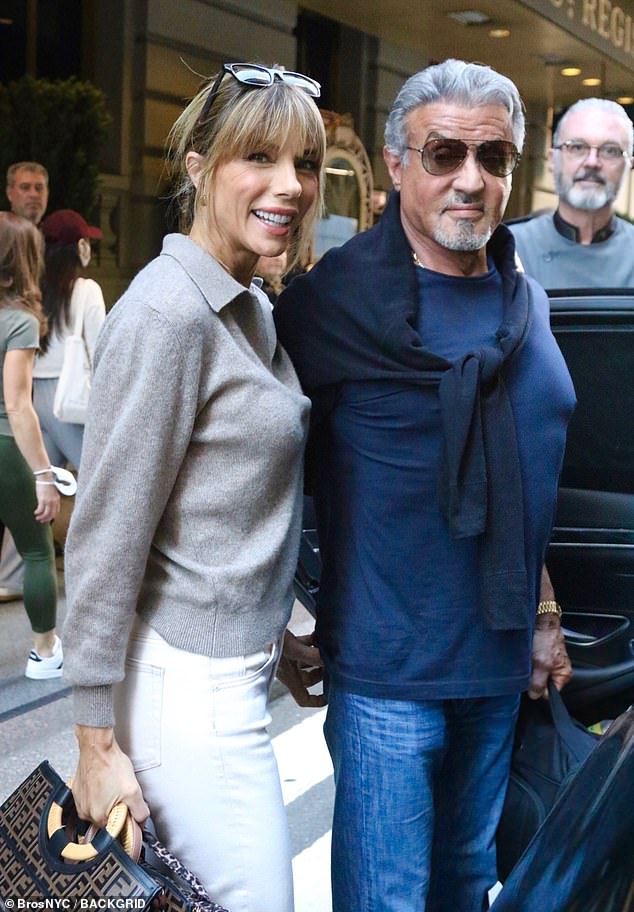 Rekindle: Sylvester Stallone and Jennifer Flavin continued to rekindle their relationship in New York Friday putting on a loved-up display on Friday; the same day it was reported they have dissolved their divorce

The Rocky star’s salt-and-pepper hair was bushed back and his mustache and goatee were cut close to his face.

Jennifer, 54, looked chic in a grey collared sweater and white jeans as she held on to a Fendi purse. 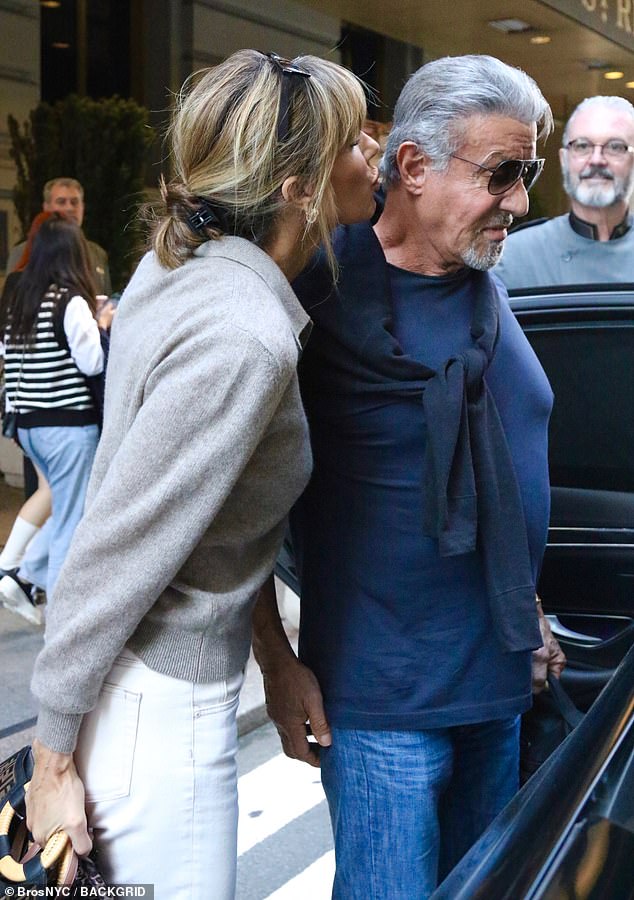 Kiss: Jennifer tried to plant a kiss on her husband’s cheek as they got into the limo

The model’s blonde hair was pulled back at the nape of her neck with a hair clip and she wore dark sunglasses atop her head.

The Serious Skin Care founder wore natural minimal makeup with a natural pink lip as she tried to plant a kiss on her husband’s cheek as they got into the limo.

The day before they were arm in arm as they shopped and in the evening she wore a sexy black dress for a date night with her husband. Her wedding ring was back on as well.

It appears the trip to the Big Apple has a dual purpose. 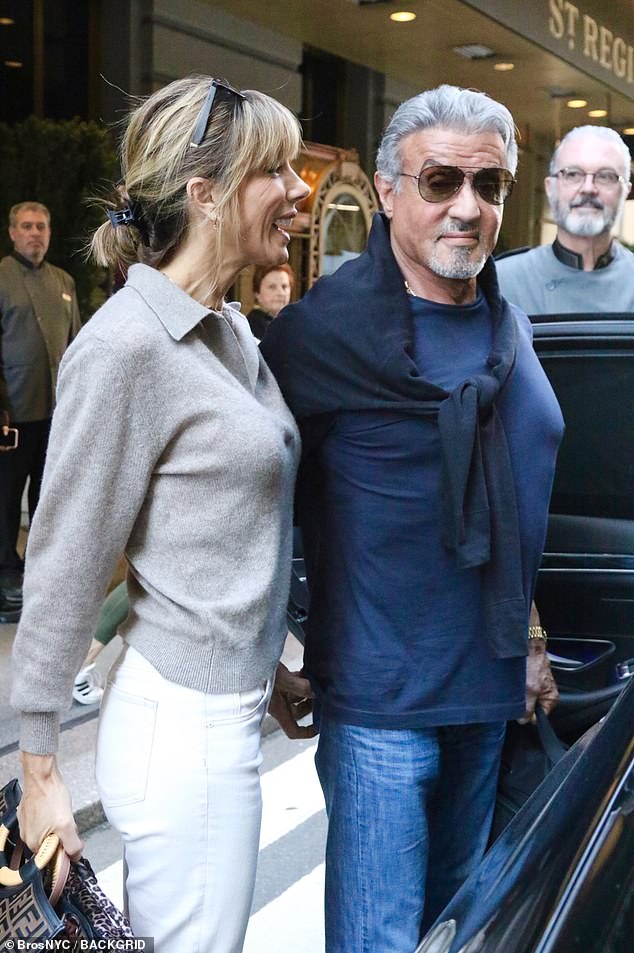 Official: The couple, who had filed for divorce, decided to reconcile two weeks ago, have officially filed a motion of voluntary dismissal in Palm Beach County, Florida, according to Page Six

Sly is reportedly there to promote the upcoming series, Tulsa King, in which he stars as a mobster recently released from prison.

His character, Dwight ‘The General’ Manfredi, is ordered by the crime family he works for to establish territory in Tulsa, Oklahoma.

Meanwhile, the two have finally put the brakes on their divorce.

The couple, who decided to reconcile two weeks ago, have officially filed a motion of voluntary dismissal in Palm Beach County, Florida, according to Page Six. 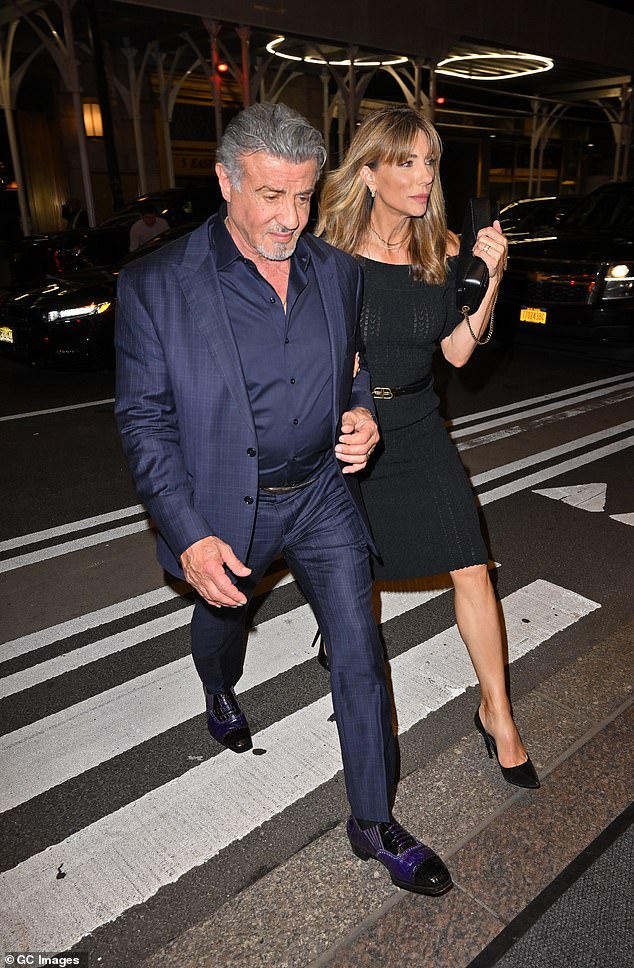 Date night! Stallone and Flavin leave The Polo Bar on Thursday evening in New York City; here she is seen with her wedding ring back on 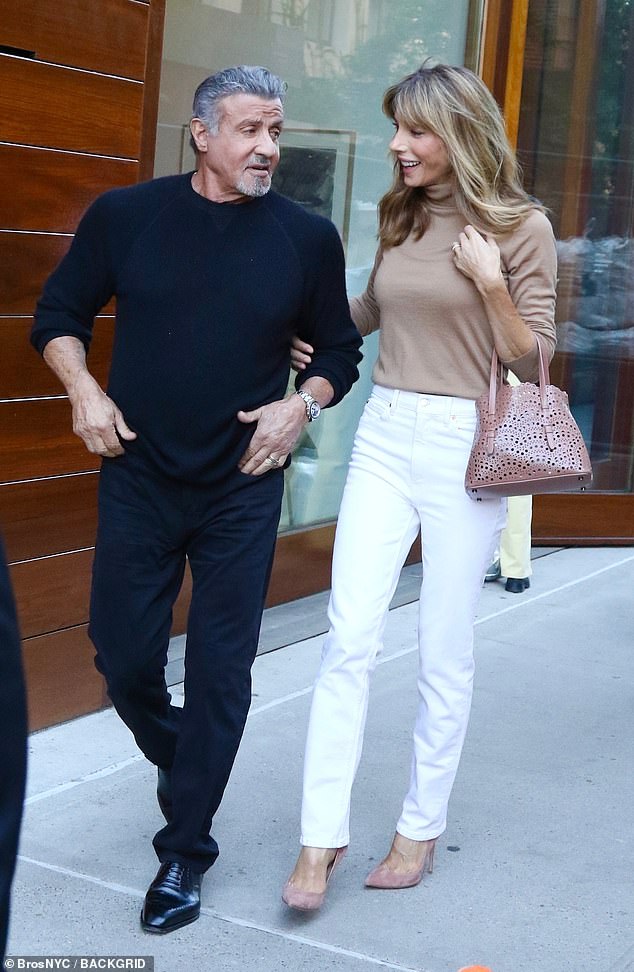 The day before: They were seen arm-in-arm in Manhattan on Thursday afternoon as they shopped and hit an art gallery; both had their rings on in this image

Earlier last week, it was reported that the movie star and his wife of 25 years ‘decided to meet up at home, where they talked and were able to work out their differences. They are both extremely happy,’ his rep told Page Six.

Their reconciliation comes one month after Jennifer filed for divorce from Sylvester.

People also confirmed the duo are back together.

Days prior to their reconciliation, a court filing revealed at a Palm Beach Country, Florida court revealed that the duo agreed ‘that it is in the best interests of each of them individually, and more importantly collectively as a family, to resolve all issues attendant to the dissolution of their marriage in a dignified, amicable and private manner out-of-court.’

Fans speculated they reconciled earlier this week after he shared two throwback photos on his social media showing he and Jennifer holding hands. 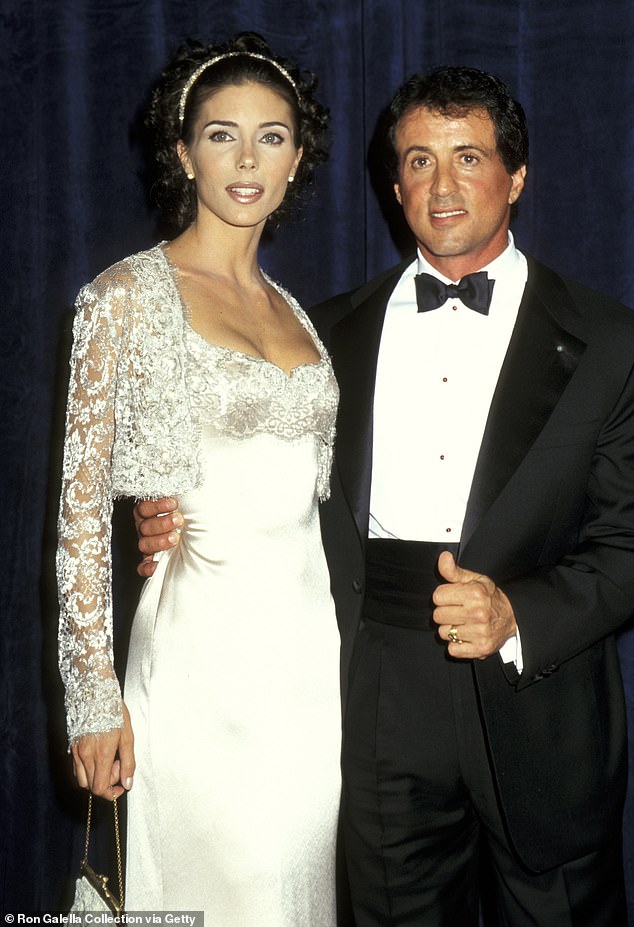 Throwback: The movie star and his wife of 25 years are pictured during Friars Club Honours in New York, 1997

‘Wonderful…’ Sly wrote as the caption for the post.

The Philadelphia native shared two throwback images. One of he and wife Jennifer smiling with their three daughters who were grade school aged at the time.

In the other snap, Stallone was seen from behind walking hand-in-hand with Flavin.

The stars are parents to three children together: daughters Sophia, 26, Sistine, 24, and Scarlet, 20; Sylvester also has a son named Seargeoh, 43, with ex Sasha Crack. He also had a son named Sage with Sasha as well, but he died in 2012 at age 36.

Sylvester and Jennifer wed in May 1997. 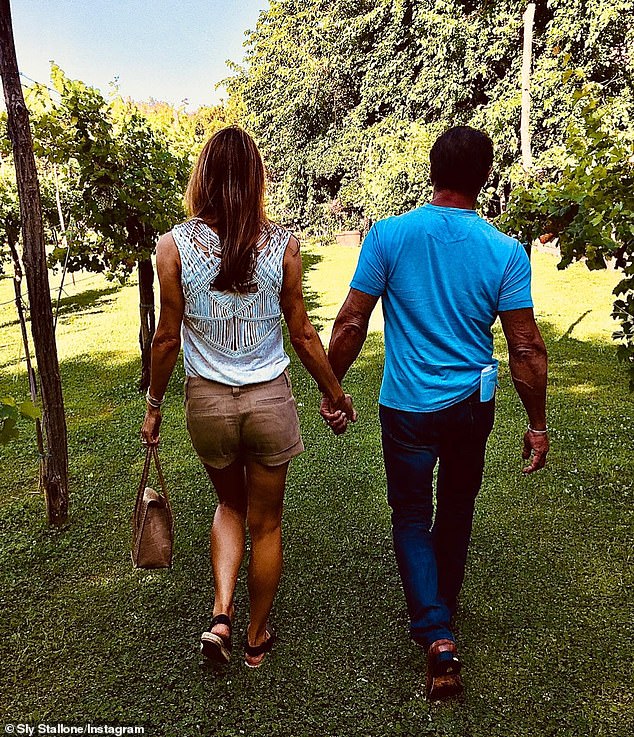 ‘Wonderful..’ Fans speculated they reconciled earlier three weeks ago after he shared two throwback photos on his social media showing he and Jennifer holding hands

On August 19, Jennifer filed for divorce from him, alleging that he ‘engaged in the intentional dissipation, depletion and/or waste of marital assets, which has had an adverse economic impact on the marital estates.’

The actor denied her allegations at the time.

Following the filing, Jennifer told People: ‘I’m sad to announce that after 25 years of marriage I have filed for divorce from my husband Sylvester Stallone. While we will no longer be married, I will always cherish the more than 30-year relationship that we shared, and I know we are both committed to our beautiful daughters. I ask for privacy for our family as we amicably move forward.’

Sylvester addressed the split at the time via a statement: ‘I love my family. We are amicably and privately addressing these personal issues.’

Days before the divorce filing, DailyMail.com revealed that the actor had a giant tattoo of Flavin on his right bicep covered up with a picture of Butkus, Rocky’s bull mastiff from the hit movies. 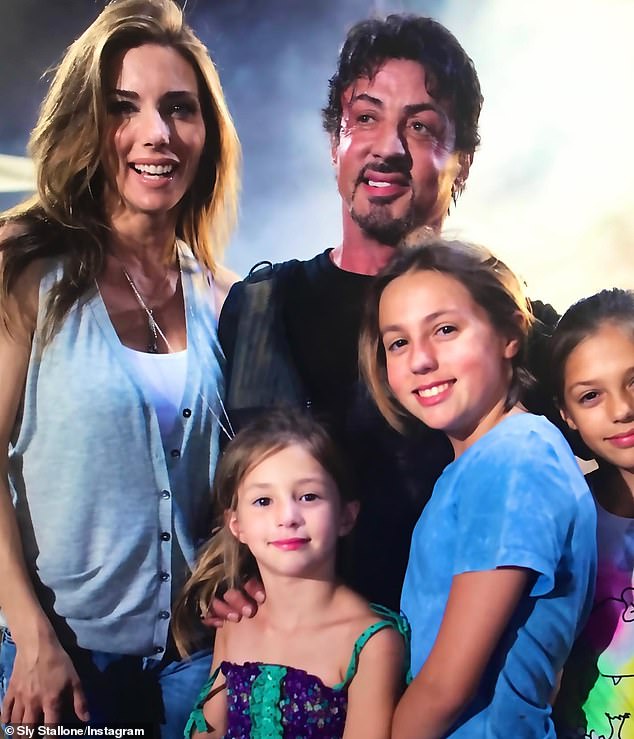 Happier times: The Philadelphia native shared an throwback image of he and wife Jennifer smiling with their three daughters who were grade school aged at the time 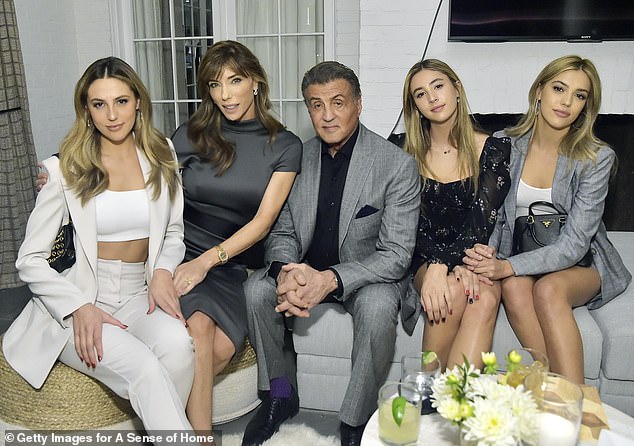 Family first: The stars are parents to three children together: daughters Sophia, 26, Sistine, 24, and Scarlet, 20

There were claims that their Rottweiler Dwight was the immediate cause of the break-up. Stallone dotes on Dwight — the name of his character in a new TV drama series, Tulsa King — and has posted gushing videos and photos of the pet on social media.

Family insiders told website TMZ that the actor wanted the dog to help protect the family at their homes in Los Angeles and Palm Beach, Florida.

But — while they already own other dogs — Flavin didn’t want a huge Rottweiler in the house and strenuously objected. Their disagreement over Dwight allegedly caused a huge row that brought up other issues between the couple, culminating in her decision to press the nuclear button. 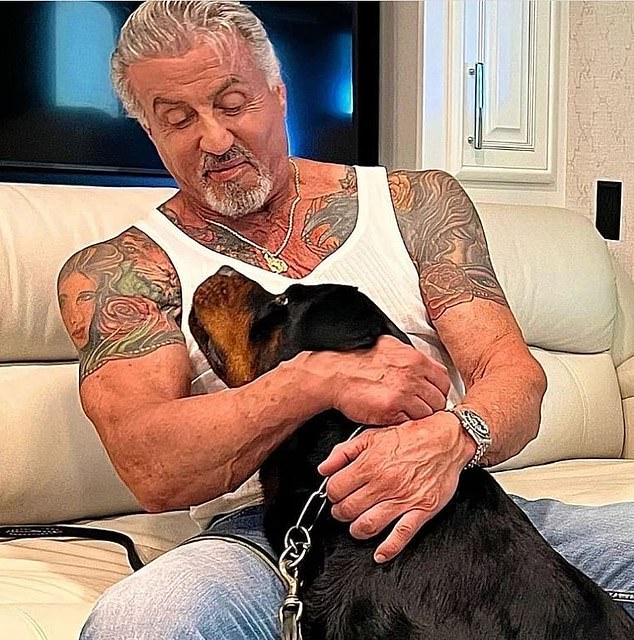 Previous: Last month, Stallone was in agreement that their marriage was ‘irretrievably broken’