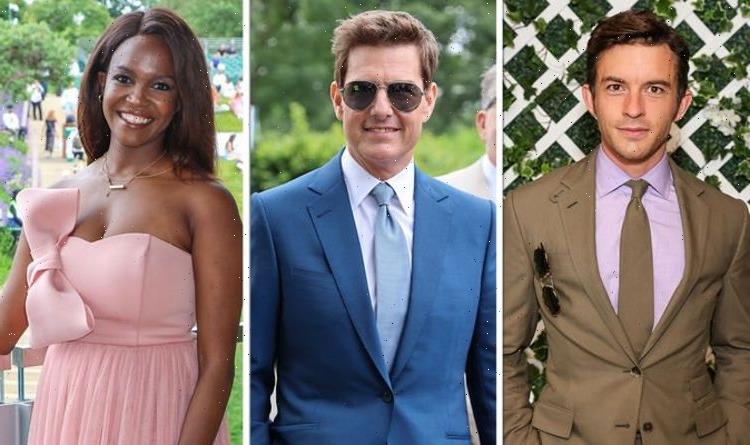 Wimbledon welcomed many stars for the Men’s Final between Novak Djokovic and Matteo Berrettini today. Among those pictured were Strictly Come Dancing star Oti Mabuse and Tom Cruise watching from the sidelines.

Novak and Matteo took to the court today as they battled it out to become Men’s Singles Champion.

The match was watched by a full crowd on Centre Court, including several familiar faces.

Among those pictured with lucky tickets were Tom and Oti.

Tom was making his second appearance in as many days for the final after attending the Women’s Final yesterday.

For the special occasion he wore a dark blue suit paired with a pale blue tie.

The Mission Impossible star also wore his trademark aviator sunglasses for the match.

Strictly Come Dancing star Oti was pictured with her husband Marius Lepure at the match.

She donned a beautiful pale pink dress for the occasion complete with a large bow.

Other stars pictured at Wimbledon include comedians Rob Brydon and Jimmy Carr.

The royals were also in attendance for the landmark match as well.

Kate Middleton was pictured alongside her father Michael Middleton as was Lady Amelia Windsor.

Elsewhere, Cruise reportedly FaceTimed the England squad ahead of their Euros final tonight.

Speaking to BBC 5Live, Harry Kane opened up about the moment the actor called.

He said: “Obviously we have had ex-players and people get in touch.

“We actually had Tom Cruise get in touch yesterday evening, you get everyone who loves football.

“The majority of people in the world love football, so it’s great to have all that support not just in England but across the world, so it’s been a great time for all of us.”

The team players were also treated to watching one of his films, which has not yet been released.

However, Gareth Southgate missed out on the fun because he was working.

He explained to the Independent: “They were very fortunate. They had a preview of a film that’s due out further down the line and they had Tom dial in to speak to them which was, I would imagine, quite surreal.

“I was in a meeting watching videos of Italy but that’s another story.

“I think they all thoroughly enjoyed that experience and, yeah, they’ve had a good week, really.”