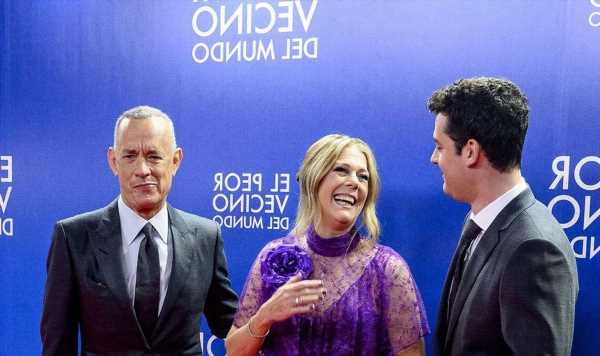 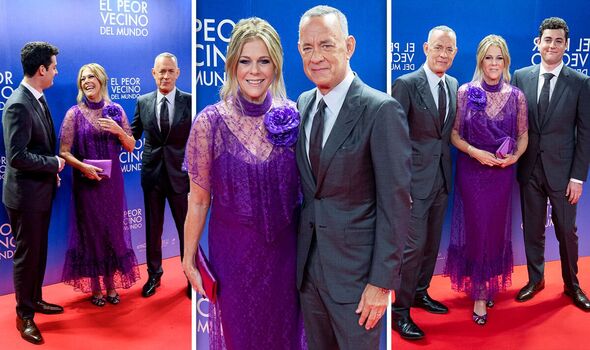 Tom Hanks put on a very loved-up display with his wife Rita Wilson as the couple took to the red carpet at Madrid’s premiere of A Man Called Otto. The Hollywood couple were also joined by their rarely-seen youngest son Truman Hanks, 26, who also looked very dapper in a grey suit.

Rita Wilson, 66, stunned last night in a purple sheer lace dress, alongside her husband Tom Hanks, 66, for the premiere of A Man Called Otto.

The actress produced the film through the Playtone company that she shares with her husband who plans Otto in the film.

She was seen posing with her spouse Tom on the red carpet, with the actor looking dapper in a grey suit which he teamed with a black tie.

The couple also posed up a storm on the red carpet with their rarely-seen son Truman Hanks, 26, who looked very dapper in a two-piece grey suit.

A Man Called Otto is adapted from the 2012 Swedish novel A Man Called Ove, which was turned into a 2015 Swedish film of the same name starring Rolf Lassgard.

Rita Wilson made sure to cut a glamorous figure

Rita Wilson stunned in a purple slip dress, featuring a sheer overlay in the same colour, along with glistening beaded detail.

Rita Wilson produced A Man Called Otto through the Playtone company she shares with her husband Tom Hanks who also played the part of Otto in the upcoming Hollywood movie.

Tom Hanks looked very dapper in a grey suit as he posed alongside his wife Rita Wilson who stole the show in her purple number. Tom accompanied his suit with a crisped white shirt and a pair of polished black shoes for the evening.

As well as Tom Hanks and Rita Wilson had a role in A Man Called Otto, and their son Truman who plays the younger version of his father in the film, with Tom talking about his son’s role on the red carpet. He said to Deadline: “Well, it’s the family business. [This guy] comes along with the same last name. But as Forster himself recognized, there is a doppelganger effect. If you hold up a picture of me at the age of 26 and our youngest son at the age of 26, we are dead ringers for each other.”

Tom Hanks admitted his resemblance to his youngest son is uncanny

Tom Hanks continued to Deadline: “You’re looking for that family resemblance anyway, and it was built into it. Everything else was a conversation between Marc and the actor who played young Otto. I said, ‘Look this is somebody else’s decision to make, not mine. But yeah, if you can hit the mark and tell the truth, let’s find out if you want to.” Tom also has his son Colin from a previous marriage and his other son Chet with Rita.

Rita Wilson and Tom Hanks have two children together

Between his marriage to Rita Wilson and former union with the late Samantha Lewes, Tom Hanks has four children. With Samantha, Tom has one son and one daughter, Colin and Elizabeth Hanks. With Rita, Tom has two sons, Chet and Truman Hanks.