Trevor Noah told Kanye West he was ‘an incredible part of my life’ but warned him that he could be in a headline about ‘men who’ve killed their exes.’

Trevor Noah took the high road after Kanye West tried to start another one of his infamous Instagram feuds against him. The Daily Show host left Ye a heartfelt message after the rapper hurled a racial slur at him in a since-deleted Instagram post — calling him a “k–n.” HollywoodLife has obtained Trevor’s now-deleted response, and it seems the talk show host has nothing but sympathy and well wishes for the Grammy Award-winning artist. 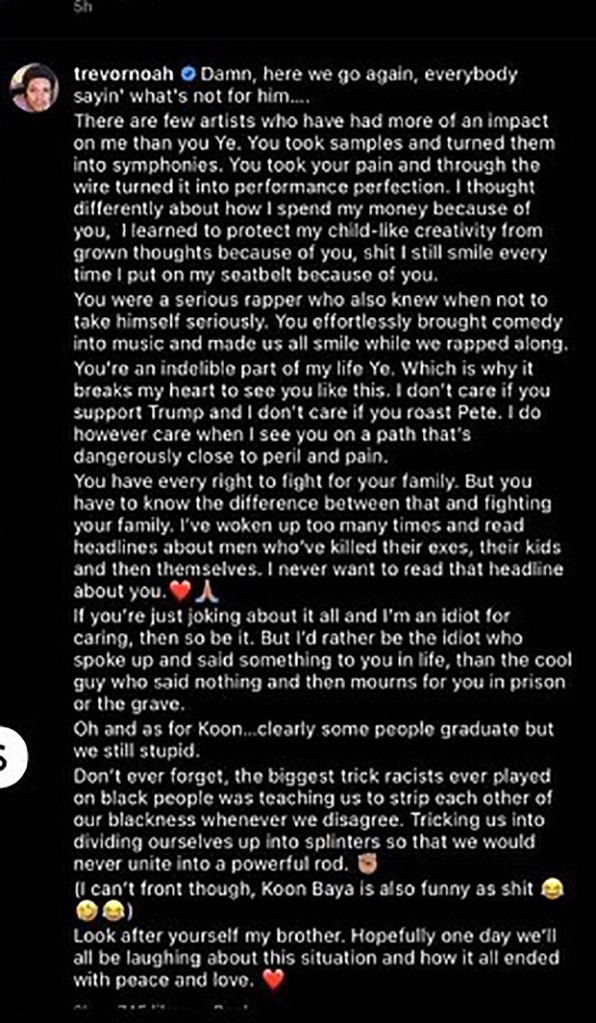 He started out by praising Kanye as an artist he has looked up to for years. “There are few artists who have had more of an impact on me than you Ye. You took samples and turned them into symphonies. You took your pain and through the wire turned it into performance perfection,” he wrote. “I thought differently about how I spent my money because of you, I learned to protect my child-like creativity from grown thoughts because of you, s–t I still smile every time I put on a seatbelt because of you.”

The comedian himself commended Kanye’s skills, calling him a “serious rapper who also knew when not to take himself too seriously. You effortlessly brought comedy into music and made us all smile as we rapped along.” He called the “Stronger” rapper an incredible part of my life” and explained that it’s “why it breaks my heart to see you like this. After that, he began to point out Ye’s current struggles and missteps. 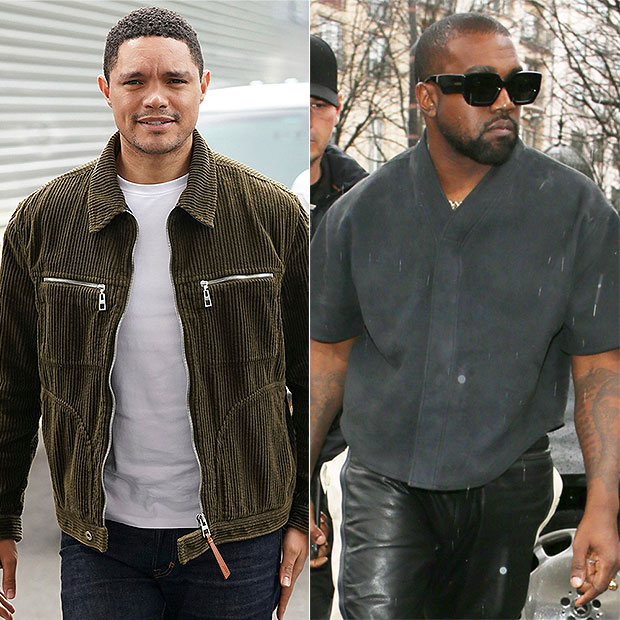 Trevor explained that he didn’t care about Ye’s political standpoint or Instagram feud with his ex-wife Kim Kardashian’s boyfriend Pete Davidson. Kanye has been harassing Pete, leaking his texts and even threatening him through his music but that isn’t the part that’s scariest to Trevor. Rather, he doesn’t want to see the rapper go down “a path that’s dangerously close to peril and pain.” He reminded Ye, “You have every right to fight for your family. But you have to know the difference between that and fighting your family.”

He included an especially daunting sentiment, writing, “I’ve woken up too many times and read headlines that about men who’ve killed their exes, their kids and then themselves. I never want to read that headline about you.” It seems that Trevor doesn’t want to excuse Ye’s actions but rather offer him the help he needs before he hurts anyone else. Will Ye listen? Only time will tell.