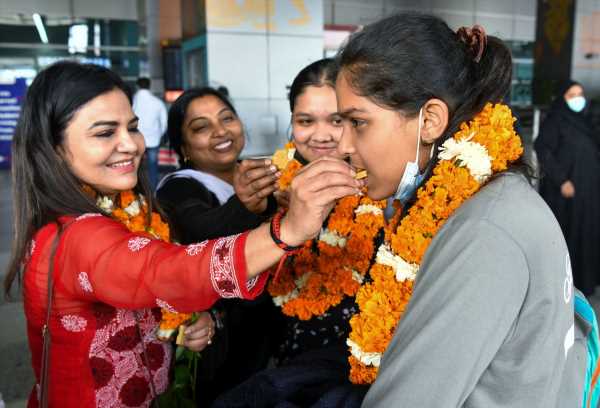 Ten days on, the fifth-year student from Nagpur, who is collating a representation for the Indian government asking for help to secure their future as medical professionals, has already received a flood of pleas from more than 300 of her seniors, batchmates and juniors.

As evacuation of stranded Indians from Ukraine and neighbouring countries continues, the returning medical students have only one thing in mind after a safe exit — a secure future.

“Firstly, safety and evacuation of all students is and should be the utmost priority. But once that is over, we are seeking our government’s help in securing our future that as of now hangs in balance,” Singh said.

She fears when the universities in Ukraine will resume classes, if at all given the Internet and network blackouts there.

“So, we are building a strong representation among Indian students who have returned from Ukraine to seek the government and the National Medical Commission’s help in our repatriation,” she added.

Various student bodies and communities associated with Indian and overseas medical education, too, are exploring ways to ensure the Russian invasion of Ukraine does not have a long-term impact on the students’ careers.

To begin with, returnees like Singh and her peers are hoping that the government and the National Medical Commission would make a one-time exception and ease some of the norms that currently impede Indian overseas medical students who are stuck in a no-man’s land.

For instance, National Medical Commission regulations prohibit Indian medical students overseas to transfer programmes from one university to another mid-way.

“We just want our government to make a one-time exception as we were forced to leave due to reasons beyond our control and we don’t know when our courses will resume,” said Singh.

Singh and her peers also plan to seek the Centre and the National Medical Commission’s permission to allow fifth- and final-year students who have returned from Ukraine to take the Foreign Medical Graduates Examination (FMGE) on a provisional basis so that the students can either bag a licence to practise or pursue further education in India.

Experts agree that allowing such students to take the FMGE licentiate examination will help solve the lack of quality doctors in the country.

“An examination to qualify someone to be a doctor, such as the FMGE or the upcoming NEXT (National Exit Exam), should be enough. We are talking more about medical colleges than about the dearth of doctors in the country,” said Dr G S Grewal, president, Delhi Medical Association.

“The sudden interest in medical students, especially by the private sector, could very well be because they are anticipating establishing a medical college in a quick and easy manner,” Dr Grewal added.

On its part, India Inc has begun responding to Prime Minister Narendra Modi’s call for setting up more medical colleges.

In a tweet on March 3, Mahindra group chairman Anand Mahindra said he had no idea of the shortfall of medical colleges in India.

Tagging his colleague and Tech Mahindra CEO C P Gurnani, he asked if the group could explore the possibility of establishing a medical institution on the campus of Mahindra University.

Mahindra tweeted the idea in reaction to a media report that said that Azerbaijan and Zagreb (Croatia) were attracting medical students from India with low fees.

Some suggested that their institution should not charge fees in crores, like some colleges. Mahindra acknowledged the suggestion.

Mahindra University has a campus in Hyderabad and offers undergraduate and postgraduate courses in engineering, law and management, media and liberal arts.

Other student bodies such as the Indian Medical Association’s Medical Students Network (IMA-MSN), which represents students in India, believe that even if private colleges were to implement National Medical Commission norms on fees, a part of the current problem could be solved and the exodus of students overseas for cheaper courses could be stemmed.

“In its recent circular, NMC has issued guidelines that 50 per cent of seats in private medical institutions and deemed universities should be at par with the fee in government medical colleges of that particular state or union territory. However, this is yet to be followed in its entirety. If done, it could make medical education more affordable even as newer private colleges begin coming up across India,” said Prashanth S, national convenor, IMA-MSN.

Industry experts estimate that it takes at least two-three years for a medical college to come up, based on government norms and procedures.