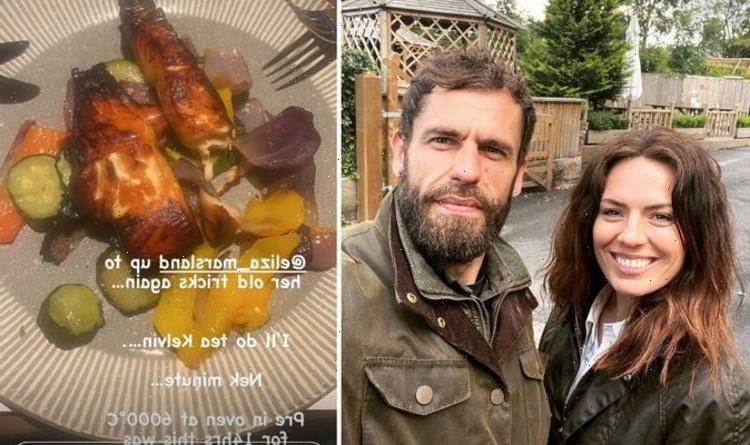 Kelvin Fletcher says his wife is ‘catfishing’ her followers

And judging by his reaction, Kelvin Fletcher, 37, was not amused. The former Emmerdale star went on his Instagram Story to post a photo of the meal Liz had cooked for him, consisting of two pieces of salmon and a variety of vegetables.

I just put some coleslaw with it

For his caption, the father-of-two joked: “@eliza_marsland up to her old tricks again…

Kelvin then followed up on his IG Story with a cheeky video clip of him confronting Liz about her cooking skills, where he repeatedly asked her how she managed to burn the salmon.

“I just put some coleslaw with it,” said the Strictly Come Dancing 2019 winner as he placed one hand to his face in disappointment.

Liz is heard laughing before quipping: “It does look good, though.”

“Actually thinks it looks good, and when I pull my face, just put some coleslaw with it,” Kelvin swiped.

Liz took a second to reply, continuing: “Well mine is not burnt.

“Should have had it when it was ready.”

“When your other half says, ‘I’ll do tea’, you get excited and you remember that they don’t cook. Are you happy with that?”

As Kelvin continued to question Liz whether she was happy with the food she made, the latter responded, stressing that if he wanted to do the cooking instead, “feel free”.

The pair are already parents to daughter Marnie, five, and son Milo, two.

Just days before Christmas, Liz and Kelvin gave a statement to PA news agency, revealing: “There’s no question that for the Fletcher family the best thing to come out of 2021 is the news that we are expecting again.

“We are feeling extremely grateful and can’t wait to meet the new addition to our family.”

The Teacher star tied the knot with his longtime partner back in November 2015, just months before Kelvin would quit his two-decade-long stint on Emmerdale.

His next big TV gig launches later this month when his BBC One show, Kelvin’s Big Farming Adventure, makes its season premiere.

Kelvin and his wife kickstart their farming business after having purchased a 120-acre farm in the Peak District, but with no actual experience in this field, fans are bound to see the couple face plenty of hurdles along the way.

The show airs on January 17, with a time still to be confirmed.