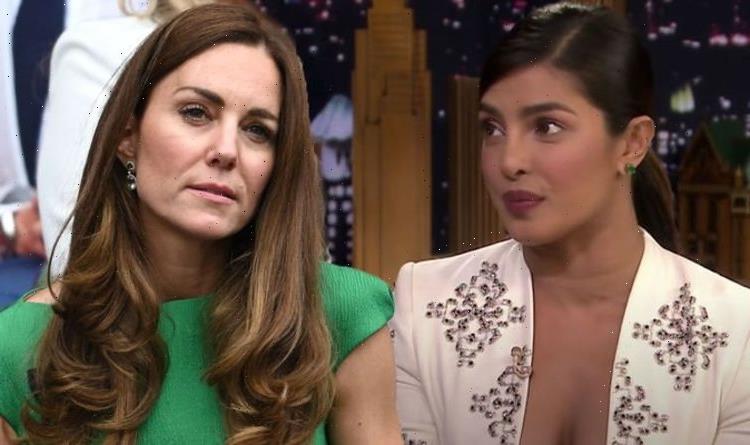 Actress Priyanka Chopra Jonas came under fire earlier today after it was claimed by some on social media that she purposely “snubbed” Prince William and wife, Catherine, the Duchess of Cambridge. However, Jonas’ fans have since leapt to the star’s defence on social media.

Why is anyone clapping for those 2, what exactly have they done that deserves a round of applause?

Priyanka, 38, and Meghan Markle, 39, are believed to have met in 2016 at the Elle Women in Television dinner in Los Angeles, with Meghan admitting that the pair “just clicked” and their friendship was an “easy, natural progression”.

It’s believed that the pair often saw one another while Meghan was filming the US hit programme Suits, before marrying into the Royal Family.

The Jamshedpur-born actress said in 2018 that Meghan “will be a princess for the people” adding that she is a “relatable young woman”.

However, their friendship appears to have landed Priyanka in hot water on social media.

In newly emerged footage, Priyanka appears to be otherwise engaged when William and Catherine entered the Royal Box to a round of applause from spectators. In fact a number of spectators in the crowd do not appear to clap.

While sat behind the future King and Queen, the actress appeared to be adjusting her scarf as the Cambridge’s took to their seats, before she looked in the opposite direction.

Some fans of the Cambridges’ criticised Priyanka for what they saw as her decision not to clap but it is not clear as to whether she knew that William and Catherine were approaching.

As well as this, some have pointed out others in the Royal Box also didn’t applaud.

Despite the criticism, many have taken to social media defending the Baywatch star who is married to singer Nick Jonas.

While a second added: “Why is anyone clapping for those 2, what exactly have they done that deserves a round of applause?”

“There was quite a few that didn’t applaud by the looks of it!!” tweeted a third.

Before a fourth penned: “A lot of people are NOT Clapping. Why only see Priyanka?”

Many have tweeted that it may be a subtle nod to Priyanka’s friendship with Meghan Markle, who made several bombshell claims against The Royal Family earlier this year.

Discussing an alleged conversation between Meghan and Catherine, Meghan told Oprah Winfrey: “A few days before the wedding she was upset about something, pertaining to the flower girl dresses, and it made me cry and it really hurt my feelings.

“There wasn’t a confrontation and I don’t think it’s fair to her to get into the details of that because she apologised, and I have forgiven her. What was hard to get over was being blamed for something that not only I didn’t do, but that happened to me.

“I’m not sharing that piece about Kate in any way to be disparaging to her.”

A source close to Meghan and Priyanka shut down rumours the pair had fallen out after Meghan didn’t attend Priyanka’s wedding in 2019.

They told E! News: “All the rumours that Priyanka and Meghan aren’t friends anymore are totally not true,

“Priyanka and Meghan are still very close friends and they talk frequently.”

The source added: “Meghan confides in Priyanka about the adjustments she has to make with being a royal.”